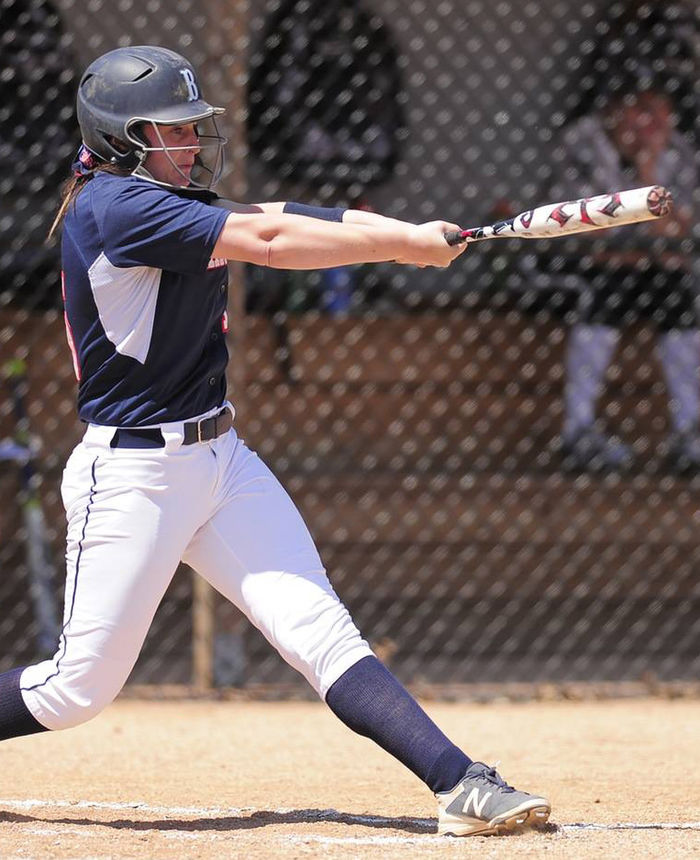 Alexa Bupp was named AMCC Player of the year in Softball.

Ten Lions were named AMCC Players of the Year:

Each spring, Penn State Behrend chooses a male and female Athlete of the Year. This year’s recipients, Mitch Obenrader and Paige Allen, both were members of the track and field team. Congrats, athletes!

Even when Behrend students are gone for the summer, the college’s athletics facilities still see plenty of action from the hundreds of Erie-area youth ages 4-17 who come to campus every day for sports camps. Individual camps are offered in baseball, basketball, soccer, softball, swimming, and track and field. Directed by Behrend’s varsity coaches, the camps give kids a chance to learn valuable skills and techniques for their chosen sport, while also making friends and having fun. Summer campers fill Junker Center with life and laughter; Behrend is always happy to have so many “little Lions” on campus.

Was there an older athlete who had a positive impact on you?

Shelby Lloyd ’15 was a senior captain when I joined the soccer team my first year at Behrend. At first, I was intimidated by her, but I came to respect her as a captain and loved playing on the field with her. Her toughness and physicality on the field was tremendous. As I enter my senior season as a captain, I hope that I can lead the team as well as Shelby did and leave an impact like she did.
— Jordan Oberlander, senior Mechanical Engineering major and member of the women’s soccer team.

Taylor Troyan ’16 (women’s soccer) had a positive impact on me because she cared about both sports and academics and always checked in with me to be sure my classes were going well. It also was admirable that she was working as a nurse during the soccer season. I don’t know how she managed to balance it all, but she did.
— Catherine Eichenlaub, junior Project and Supply Chain Management major and member of the women’s soccer team.

The player who had the most positive impact on me was my fellow defender, Mike Worthy ’16 (men’s soccer). He was always the most talkative player on the field, which a team needs from their center back. However, he was also the most talkative player off the field, too. Mike was always an entertaining and personable guy wherever he was, and our locker room was no exception. He went out of his way to get to know each and every player on our large roster, including the first-year students. Because of this, Mike was a great leader for our team, both on and off the field.
— Joshua Kolarac, senior majoring in Communication and a member of the men’s soccer team. 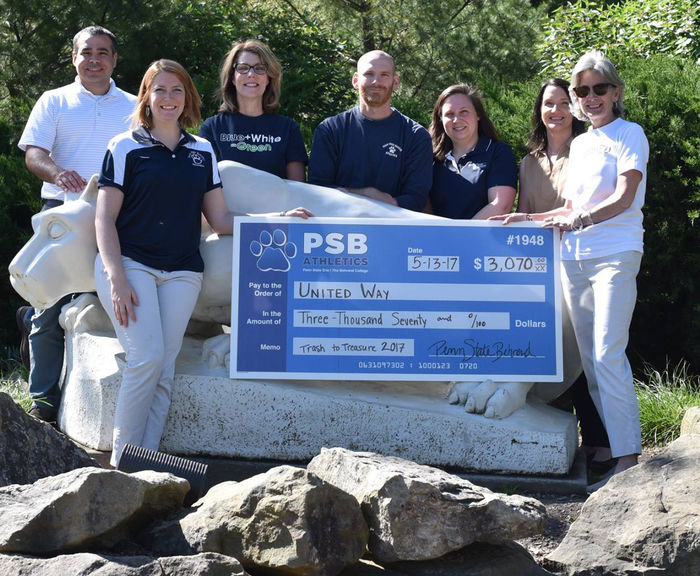 Turning “trash” into cash raised a record $3,070 for United Way of Erie
County.

Wrestling returns to the college after a thirty-eight year absence, and wrestlers will once again make Erie Hall their home for practices and matches, just like the 1967-78 Lions did. Bobby Patnesky, formerly the head coach at Division I Davidson College in Mooresville, North Carolina, has been hired to lead the Lions.

Women’s bowling is a second new sport for the college. Behrend’s team will be led by coach David Kacprowicz, the owner and coach at Erie’s Eastland Bowl. He began bowling at the age of 8 and previously coached for eight years at Don Carter’s in Tamarac, Florida, where he worked with the bowlers averaging 175+. Kacprowicz’s Lions will compete against six other teams in the Allegheny Mountain Collegiate Conference, with matches held at local bowling lanes.

“These sports will help to draw more high-achieving student-athletes to our campus,” said Brian Streeter, senior director of athletics. “Both sports reward students who are driven by individual success. Those tend to be good students who are determined to achieve, both in and out of the classroom.”

To see schedules or learn more about how the college’s newest teams are faring, visit psblions.com. 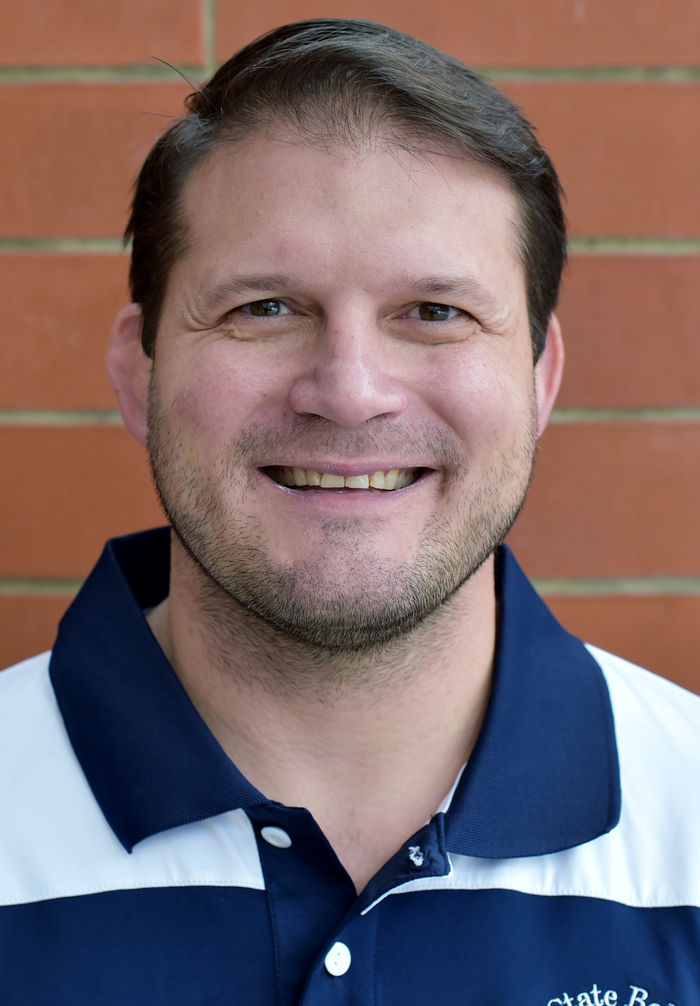 Bobby Patnesky spent the last twelve seasons as the head coach at Division I Davidson College in Mooresville, North Carolina. He left the program ranked second in career victories, having mentored five national championship qualifiers and four Southern Conference Champions for the Wildcats. Patnesky was a three-year starter for the wrestling team at West Virginia, where he earned a bachelor’s degree in communication. He also has a master’s degree in athletic administration. The Cannonsburg native said he is excited to return to his home state and join the Lions coaching staff.

Behrend Magazine pinned Patnesky down to ask him a few questions:

How would you describe your coaching style? I want to take what every individual has to offer and make it better. I evaluate an athlete on their effort and prefer to take a positive approach. The days of Bobby Knight are gone. In matches, I love to score points because the more points your wrestlers score, the more people want to watch them compete.

How will it be different to build a new program rather than take over an existing one? It’s very exciting because I have the opportunity to build a culture right from the start. It’s a clean slate that allows me to set the tone I want, which is one of mutual respect, hard work, leadership, and a family-like team atmosphere. My players will have input into this program so that they feel they're part of it.

What are the biggest challenges you face? The amount of time I have to work with the students is different in Division III. That is definitely going to be a huge change for me. What is nice about this division is that every wrestler is choosing to play. They are not receiving any scholarship funds to wrestle, which is an indicator to me that they are personally driven, disciplined, and have a strong work ethic.

What are some of the assets at Penn State Behrend? Pennsylvania has very strong high school wrestling programs to pull from. Also, this is Penn State, which is a name that speaks volumes and is a respected institution across the country. It’s refreshing to come to a place where both education and athletics are valued and where I’ll have the resources to make this program successful.