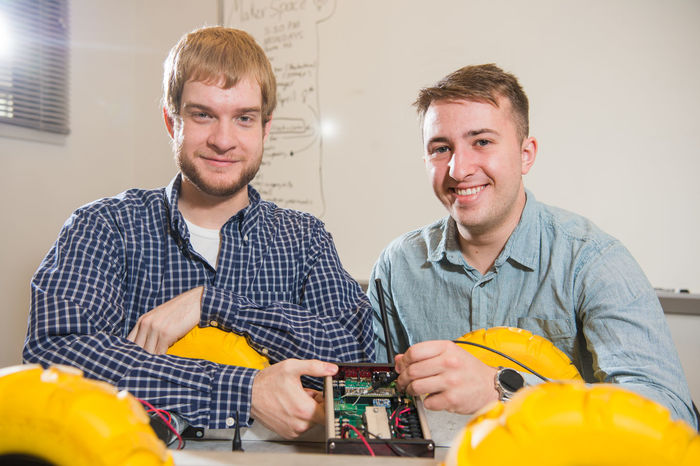 Chad Hensley, a software engineer and lifelong hunter, had an idea to build a mobile platform for 3D archery targets that could be operated by remote control or smartphone app and could also move autonomously. The Louisa, Virginia, resident built a prototype, called 4DShoot, and took it to the 2015 Archery Trade Association show to see how it would go over.

“When people started handing me their credit cards, I knew I had something,” he said.

At the time, however, all Hensley had was a pricey prototype and confirmation that his target market (pun intended) was interested in his product.

“I needed help with the autonomous functionality, getting the hardware to communicate, and replacing the expensive prototype boards I was using with something more cost effective to manufacture,” he said.

From Virginia to Pennsylvania

A water cooler discussion with a colleague led Hensley to Penn State Behrend’s School of Engineering.

“I was talking with my coworker, Matt Walters, about my target and he mentioned that his brother, George, was an engineering professor and that he might be able to help me,” Hensley said.

He reached out to Dr. George Walters, associate professor of electrical and computer engineering, who told Hensley that his concept sounded like it had great potential as a Senior Design Project.

Hensley filled out the required paperwork and submitted his project for student consideration. It quickly caught the eye of two Computer Engineering majors—Matt Cauvel and Ryan Kelley.

“The 4D target concept stood out to me because it encompassed a lot of what I had learned in my classes, and it sounded like an innovative product to work on,” Kelley said.

The marketability of the moving target also appealed to the then-students. (Cauvel and Kelley graduated in May and both accepted positions with Northrop Grumman in Baltimore, Maryland.)

“Many project sponsors are looking for students to gather theories or troubleshoot a problem, but this was an actual product that was going to be taken to market,” Cauvel said. “It was a unique chance to build something from the ground up.”

It was also a big challenge.

“We were tasked with creating the control unit of what is essentially a mini Mars rover,” Cauvel said. “Chad was looking to create an autonomous target that could be interfaced with a mobile device and other means of control. Our job was to build the navigation, control, and power delivery systems for this platform.”

Kelley was used to making ideas come to life. He had spent his childhood tinkering in the basement with his dad, a mechanical engineer, building “Frankencomputers.”

“I’m adept at working with just about anything related to computers. I can make apps, design video games, develop hardware from start to finish, work on industrial applications, and more. If it has a circuit board or operates on computer code, I can figure it out.”

Cauvel said the most daunting part of the project was the sheer volume of work to be done by just the two of them, along with their full-time studies.

“The scope of the project was just massive, from hardware and software design to implementation and prototyping,” he said. “We spent a lot of nights plowing through schematics and code. Coffee helped.”

A year and umpteen-thousand cups of java later, Cauvel and Kelley presented their results and demonstrated Hensley’s new and improved 4D target at the Richard J. Fasenmyer Engineering Design Conference, navigating the robotic base between rows of desks.

Hensley was thrilled with the results.

“Working with Matt and Ryan was just incredible,” Hensley said. “They showed a level of professionalism and proficiency far beyond their years.”

While there are still tweaks to be made, Hensley expects to take his product to the 2019 Archery Trade Association show. But this time, he’ll be taking orders.