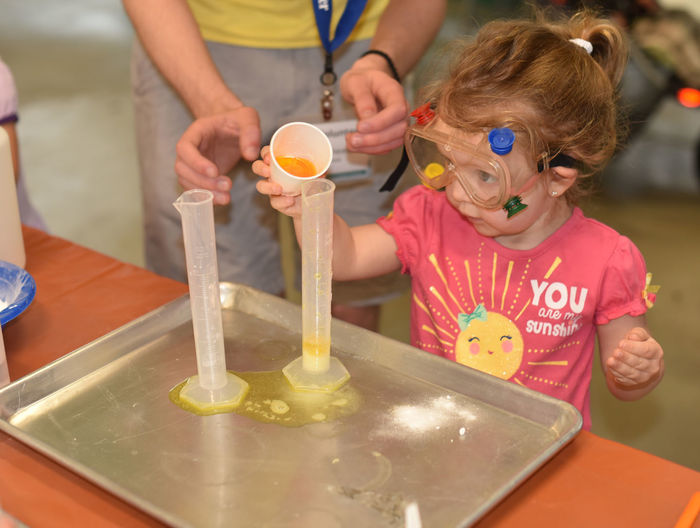 A preschooler works on a science experiment during Preschool Science Story Time.

Earlier this year, the School of Science launched a new outreach program for preschoolers called Science Story Time. Parents and other caregivers were invited to bring their wee ones to Behrend for a one-hour session that included a science-related story reading by Tracy Halmi, senior lecturer in chemistry, and some messy, hands-on experimenting with student volunteers. The series was a hit, with each session filling quickly.

More than 650 undergraduate and graduate degrees were awarded at Penn State Behrend’s spring commencement ceremony. Congratulations to all of our brand new alumni. We’re proud of you! See photos from spring commencement at facebook.com/pennstatebehrend.

Every commencement ceremony begins with an academic procession led by the College Marshal carrying the mace that symbolizes the University President’s authority. Penn State Behrend has a new mace, carved from fiddleback maple by a local artist and engraved with both the University seal and an illustration of Glenhill Farmhouse.

A special day at the track

This spring, Penn State Behrend hosted a Special Olympics track meet and "give-it-a-try-day" for nearly 200 students in grades K-12 from the City of Erie. Brian Streeter, senior director of athletics, said Special Olympics is a beloved organization that the athletics department is always happy to support. All of Behrend’s coaches helped at the meet, as did many student-athletes.