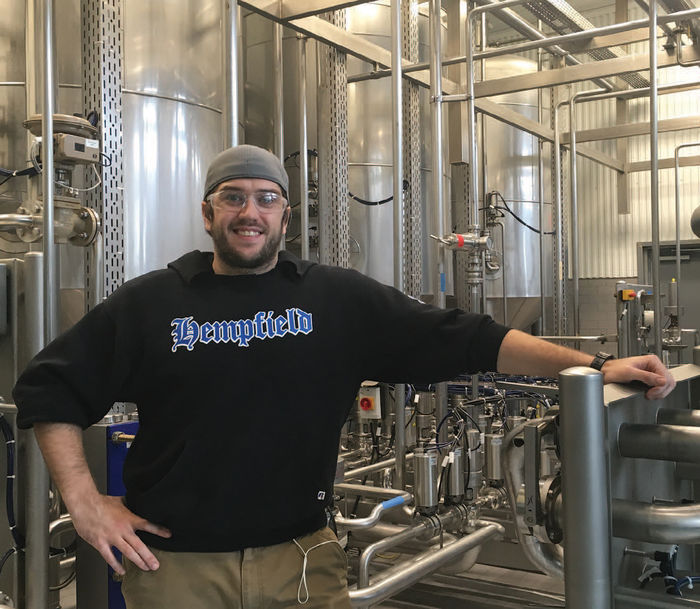 Todd Thorniley ’14 puts his Biology degree to use as quality control technician at Southern Tier Brewery in Lakewood, New York.

Beer is big business. Really big business. It’s a $101.5 billion industry, with the craft beer market alone hauling in $19.6 million. According to the Brewer’s Association, in 2014, it was estimated that the craft brewing sector of the industry employed more than 424,000 people and contributed $55.7 billion to the United States’ economy.

Now more than ever, brewing is a viable and lucrative career option, not only for would-be beer makers, but also for biologists and communication professionals, too.

We caught up with two recent Penn State Behrend graduates who have used their degrees to tap into the growing craft beer business.

The science of brewing

Todd Thorniley ’14 does not hold back when he describes how he feels about his job at Southern Tier Brewing Company in Lakewood, New York.

“I’m into craft beer, and to get this position as a 22-year-old coming out of college has kind of been a dream come true,” said Thorniley, a Biology graduate who works as a quality control technician at the company.

It is Thorniley’s job to make sure Southern Tier’s brewing process goes smoothly. It’s no easy feat at a brewery that produces more than 100,000 barrels of beer annually, making it the thirty-fifth largest craft brewing company in the country in terms of sales volume. Some nights, Thorniley runs an audit of the production line, making sure there are no glass-quality issues while also ensuring that bottle caps are as tight as possible. Other nights, he is in the lab, testing samples of beer for its acidity, alcohol content, turbidity, and clarity.

Every night, however, he puts his Biology degree to good use.

A day at the brewery

A typical work day for Thorniley depends on what production cycle the company is in that week. As a quality control technician, he rotates between three work positions: lab, sensory, and packaging/cellar. In the lab, he tests samples for brand specificity while the sensory position requires him to set up and run daily flavoring tests. In sensory, he also trains coworkers to identify ‘off’ flavors in the beer, like fruit or butter, and unify terminology for describing flavor characteristics.

In the packaging/cellar rotation, Thorniley monitors packaging quality as well as beer fermentation. When the beer is still fermenting, he must check to ensure that it follows brand specifications and make any necessary tank manipulations.

Steve Anthony ’09 took a different route into the beer biz. The Communication grad and Erie native is co-owner and co-founder of Erie Ale Works, the Erie region’s first community-funded brewery. Anthony and his partner, Jeff McCullor, opened the brewery in September 2014.

“We had been paying attention to what was happening in the area in regard to craft beer, and we thought, ‘Let’s give this a shot,’” Anthony said.

Utilizing a Kickstarter campaign, the two shared their vision for the brewery and found the community was eager to help. A total of $8,000 was raised via the campaign, which went toward paying the start-up’s legal fees.

From there, the two began to look at possible locations, settling on a storefront on West 12th Street in downtown Erie. Anthony said there have been kinks along the way, but he has been able to turn to other area breweries for support.

“Erie’s brewing community is such a tight-knit group, and there are so many people to help you. We have relied on the brewing community big time,” Anthony said. “It’s totally a cliché, but we realize a high tide raises all boats. Everyone knows that if we work together, we can all be good at this.”

Since Erie Ale Works is still in its infancy, Anthony works hard to continually spread the word, putting his Communication degree to use.

“We handle all of our own PR, marketing, and social media. The craft beer audience is a very digitally-engaged audience, and in order to communicate with them, we have to be equally engaged,” Anthony said. “We make sure we stay on top of every outlet.”

In its brief history, Erie Ale Works has already seen significant growth. In spring 2015, the brewery started selling pints and expanded its taps from two to four to its current six. Its beer is also being distributed locally by the barrel.

In the future, Anthony said he hopes to move toward bottling Erie Ale Works’ beer. However, he knows that will come with continued growth, which is his primary goal at this time.

“Craft beer drinkers are so into new stuff that if you slow down, they’ll pass you by,” he said.

While Thorniley and Anthony may be among the first Behrend alumni to work in the beer brewing industry, it’s unlikely that they will be the last.

In December, the Brewers Association announced there are now 4,144 breweries in the country, topping the historic high of 4,131 breweries in 1873. Clearly, the beer business is booming.

“It’s pretty cool,” he said. “You see all these industries take off and you think, ‘It would cool to be a part of that,’ and now I sit back and think, ‘Wow, I am a part of one of those thriving industries.’”