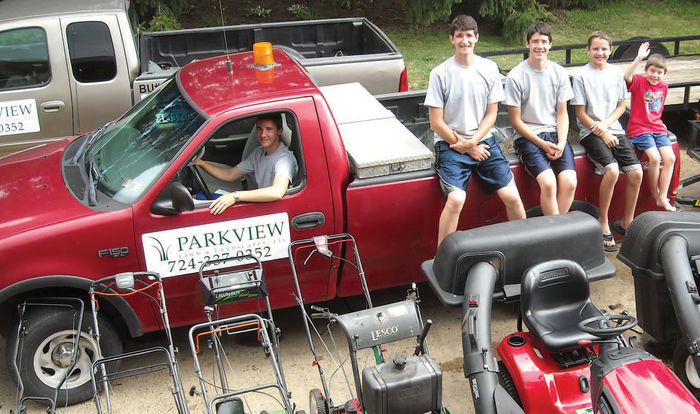 Bill Staniszewski, in the truck, and his brothers own and operate Parkview Lawn and Landscape in New Kensington.

1. a person who organizes and operates a business or businesses, taking on greater than normal financial risks in order to do so.

It takes many things to start a business—an innovative idea, vision, capital, legal documents, market research — but above all it takes courage. At some point, every entrepreneur must stand at the edge of their “cliff” and decide whether to take a step back or forward. Should they play it safe or accept the risk of potential failure to pursue possible success?

It’s a formidable decision for entrepreneurs with years of business experience, even more so for those still learning. We talked to three student entrepreneurs, each at a different stage in his venture, to find out what it’s like to take a leap of faith and start a business while still in school.

Established and in the black

Bill Staniszewski, a senior majoring in Interdisciplinary Business with Engineering Studies, was just 16 years old when he started a landscaping business in his hometown of New Kensington.

What began as a part-time summer job mowing lawns for neighbors blossomed into Parkview Lawn and Landscape, LLC, which Staniszewski, 22, runs with his four brothers—ages 21, 19, 16, and 10—and his mother, the company’s business manager. Staniszewski’s father, too, helps with business advice and physical labor when needed.

The company is profitable. In fact, Parkview Lawn and Landscape earns enough revenue that the three oldest brothers have not had to take out student loans for their educations.

“We started the business to pay for college,” he said,” “and, thankfully, we’ve been able to do that.”

Staniszewski is quick to point out that it’s not easy money.

“We all work hard in the summer, sometimes putting in sixty-hour weeks. When we first started, though, we worked close to eighty-hour weeks, using every bit of daylight we had available to us.”

Staniszewski works hard in the classroom, too. He is the recipient of two leadership scholarships from Penn State Behrend. He also spent a year working as a project manager at a civil engineering firm after earning an associate degree in Mechanical Engineering Technology at Penn State New Kensington.

“It was always my goal to return to school to earn my bachelor’s degree,” he said. “IBE is the perfect major for me because I enjoy the design aspect of engineering and the management aspect of business. I like working with people.”

To that end, Staniszewski is co-executive director for this year’s THON campaign at Penn State Behrend. He applied for the volunteer position because he felt that with his business experiences he had a lot to offer to the campaign.

“We’ve already identified a couple of untapped markets (for donations),” he said. “I think Behrend can raise a lot more money this year.”

Leave it to the entrepreneur to think big and outside the box. It’s a skill that will serve him well in the future. Staniszewski wants to open his own engineering firm someday.

For now, though, he’ll continue at Parkview Lawn and Landscape.

“I’ve got at least twelve more years to help out there. My youngest brother is just 10, and we have to get him through college,” he said with a soft smile. 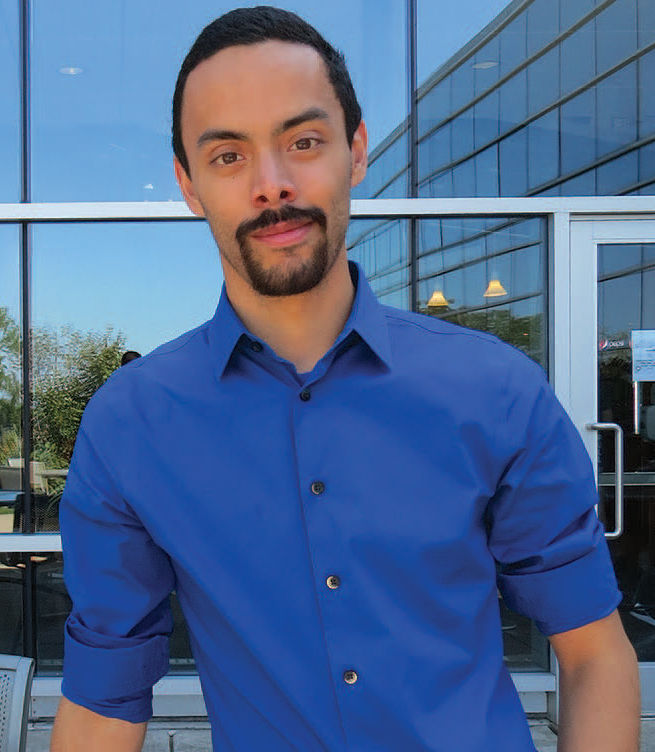 Phil Shank, a senior Management Information Systems student, had an idea for a website design business when he was in middle school. He even had a name for the business—Prometheus, a titan in Greek mythology whose name translates into “forward thinking.”

But it was at Penn State Behrend that Shank, who has been dabbling in programming and website design for more than a decade, found the collaborators and interdisciplinary talent he needed to launch and grow the site.

“When I first started the site in high school, there were five of us working on the concept, so we thought it would be cool to replace the ‘S’ in Prometheus with a numeral five,” Shank said. “Also, the domain name Prometheus.com was taken.”

Today, there are eight people working for Prometheu5, which offers website design and hosting services as well as software solutions and applications. The business has several clients, including a car repair service and a bakery.

The majority of those working on the site are Behrend students, including Finance and Business Economics majors who are helping Shank to file business documents such as the articles of incorporation and trademarks.

“Right now, in the eyes of the law, we’re just college students doing this for fun and experience, but once we are incorporated, it will be a legitimate business entity.”

Prometheu5’s current project, Khromnesty, is an appointment-scheduling manager that Shank is beta-testing with the faculty and staff of the Black School of Business. Though Prometheu5 is not making a lot of money yet, Shank fully expects that it will one day.

For now, he’s gaining management experience and making inroads with the help of Dr. Kathleen Noce, senior lecturer in MIS and director of Partnership Erie, an outreach program of the Black School that develops websites for nonprofit organizations.

“We’re working toward having Partnership Erie develop its sites on the Prometheu5 infrastructure,” Shank said, “so during the development phase, we’d host the sites that Partnership Erie builds.”

Though Shank will graduate in May, he’ll have another year to tap into the resources available at Behrend, as he plans to stay an additional year to earn a Master of Business Administration degree.

“Earning an MBA will help me advance Prometheu5 even further,” he said. 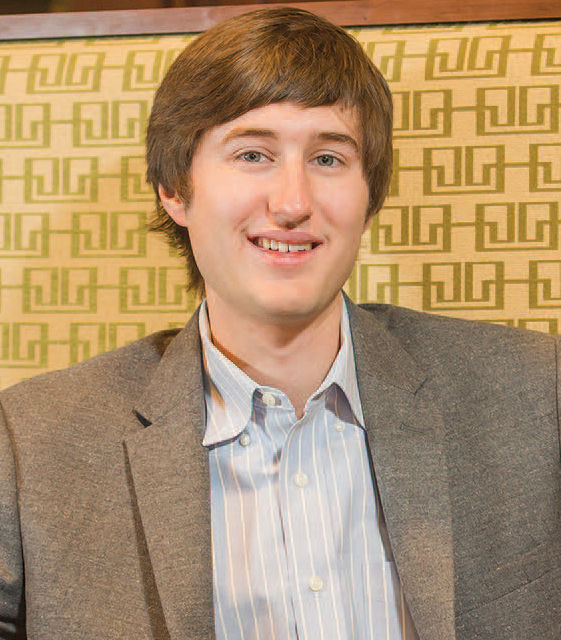 Drew Lang, a Penn State Behrend MBA student, was up late studying for his undergraduate Biology degree at University Park when he realized he was missing some of his notes.

“I immediately wondered if there was a website where I could buy someone’s notes from the class,” he said. “I looked online and couldn’t find anything.”

In that void, Lang saw a business opportunity.

“I knew I couldn’t be the only college student who had ever lost their notes or had to miss a class,” he said.

That night he came up with the concept and business plan for an online company—OmegaNotes.com—that would offer a platform for students to buy and sell notes.

“At no point do I take ownership of the notes,” Lang said. “Students upload their notes and set the price. Potential buyers see a preview before deciding if they want to purchase the notes. Lang Enterprises takes a commission on sales.” It’s not a revolutionary idea. In fact, there is a traditional bricks-and-mortar store – Nittany Notes – that has been buying and selling student’s notes since the early 1980s.

“Once I did some research and determined it was a viable business, I formed a limited liability corporation,” Lang said. “I have no doubt in my mind that this business will be successful, but I will say it was a little scary to sign for the business loan.”

He worked for a year with a website development firm to create the site.

“We spent three and a half hours just discussing the search functions,” he said. “I had no idea how complex building a platform would be.”

A stripped-down OmegaNotes.com is now in beta-testing.

“The bells and whistles will come later,” Lang said. “I’m not entirely certain what my customers want. We’re going to use their feedback to determine that.”

Lang has been making use of the college’s new Innovation Commons—a laboratory for entrepreneurs (see page 2). In addition, he’s tapped students in the Marketing Club to help him create a marketing strategy for the company and he plans to offer two student internships in the spring.

Lang, who wants to be a neurosurgeon and has the calm, collected demeanor you’d want in the doctor operating on your brain, said his MBA coursework has been instrumental in helping him launch OmegaNotes.com.

“I couldn’t be happier with Behrend’s MBA program,” he said. “I’ve been able to take a lot of what I’ve learned and immediately apply it to what I’m doing with OmegaNotes.

He said his M.B.A. will eventually be put to use in another venture, too—a private medical practice.

“Unfortunately, a lot of doctors don’t think about the fact that they might open their own practice one day and they don’t have the training to run a successful business,” Lang said. “That’s why I decided to earn my M.B.A. before going to medical school.”