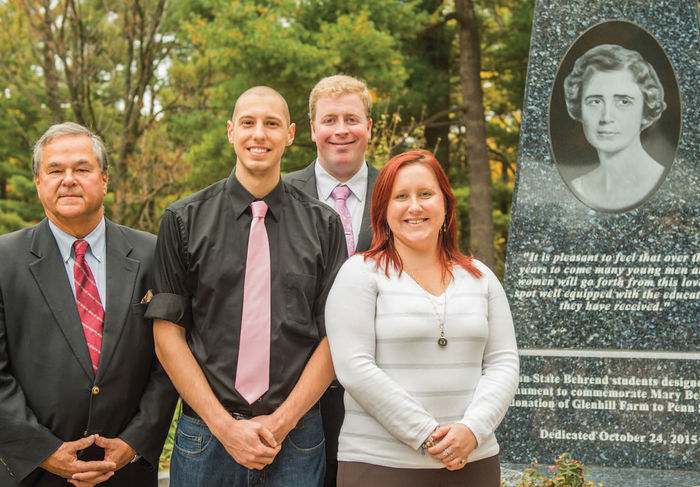 Mary Behrend once gave her oldest grandson a piece of advice about speaking in public: “Keep it short,” she said.

Richard Sayre told the audience gathered for October’s unveiling of the new student-designed Mary Behrend Monument that he was poignantly reminded of his grandmother’s counsel. It was typical of her concern for others, and especially on a day celebrating her generosity, that she would not have wanted anyone to sit through a meandering speech.

The new monument, located next to Mary’s painting studio-turned-student theatre, recognizes her outsized influence on three generations (and counting). In 1948, Mary donated her summer home and farm to Penn State in memory of her late husband, Ernst, the co-founder of Hammermill Paper Co. Her land allowed the University to establish a permanent presence in Erie after more than two decades of moving among rental spaces, and gave Penn State Behrend room to grow from a campus of 146 students into a four-year and graduate college with an enrollment of 4,700 students learning in-class and online.

he story of Mary’s donation has always been central to the college’s history and familiar to its students, so much so that some questioned why there was no public acknowledgment of her gift.

Brennan Zanella ’13, one of the monument’s student designers, was part of the grassroots committee that in 2013 approached Dr. Ken Miller, senior director of campus planning and student affairs, with a plan (complete with CAD drawings!) of a nine-foot granite centerpiece surrounded by benches, historical markers, and gardens.

“My friends and I had been discussing the opportunities and resources we had at Behrend,” Zanella said in recounting for the dedication audience the student committee’s concern that Mary’s gift was not visibly acknowledged on campus. “Without this land we would not have met and had the experiences we did.”

The monument was funded primarily through the sale of inscribed walkway pavers designed to set in concentric circles radiating from Mary’s etched portrait, a symbolic reminder that her gift continues to grow in size and significance.

Pavers still can be added to the project; visit behrend.psu.edu/ monument for details or to make a tax-deductible purchase.

Happily, the students who first raised the call for a monument honoring Mary Behrend had project management skills to match their enthusiasm.

“The students didn’t just suggest this project; they planned it,” noted Dr. Ken Miller, senior director of campus planning and student affairs. “They researched the costs with local businesses. They developed a site plan. When they pitched the idea to the campus administration, they had done their homework on all aspects. They were committed to seeing the project through to completion.”

The campus community sends its thanks to the dedicated members of the student committee: