Scott McCain has been named chairman of Penn State Behrend’s Council of Fellows. The council advises the college’s administrators on issues related to economic development and regional need.

McCain, owner and president of Erie Concrete Steel and Supply Co., is also a board member of the Barber National Institute and the Buffalo Regional Chapter of the Metals Service Center Institute.

A 1980 graduate of Penn State, he helped to establish the McCain Family Foundation Trustee Scholarship at Penn State Behrend. 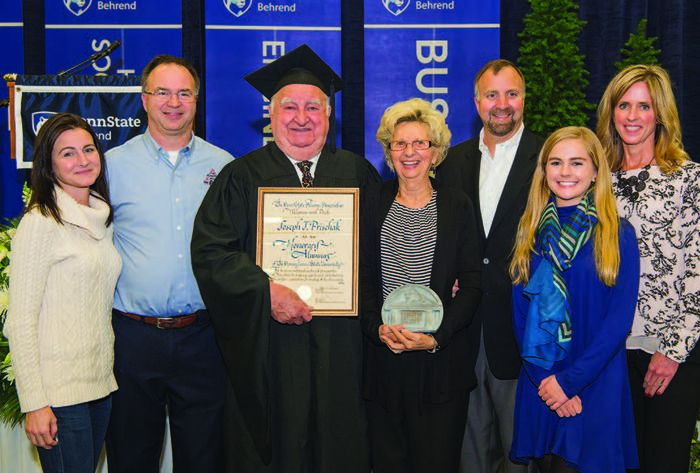 Erie businessman and philanthropist Joseph J. Prischak was recently named an Honorary Alumnus of Penn State. The designation, rarely awarded by the University, is a much-deserved honor for Prischak whose contributions have had a significant impact on Penn State Behrend.

Prischak, founder and chairman of The Plastek Group, played a critical role in the creation of the four-year plastics engineering technology degree program at Penn State Behrend. It is one of only four accredited programs in the United States.

In addition to his role in helping shape the PLET program, Prischak and his wife, Isabel, created two scholarships at Penn State Behrend. One supports students who, like Prischak, are graduates of Conneaut Valley High School. The other scholarship is designated for Plastek Group employees and their children and grandchildren.

“I’ve worked closely with Joe and can attest that this is a richly deserved honor,” said Dr. Ralph Ford, chancellor and former director of the School of Engineering. “Behrend’s plastics engineering technology education is the plastics industry’s gold standard, and that’s in no small part due to Joe’s championship of our program and its facilities.”

Based on the success of Behrend’s plastics engineering technology degree, in 1991 Prischak started an identical program at the University of Bratislava, Slovak Republic (formerly Czechoslovakia).

He is also the founder of Africa 6000 International, a nonprofit that drills deep freshwater wells across the African continent.

Saying goodbye to two friends of the college

Vollbrecht, a Penn State graduate, was a longtime member and past president of the Lake Erie Chapter of the Penn State Alumni Association. Most recently, she was instrumental in raising the $50,000 needed to create the chapter’s trustee scholarship for Penn State students. Over the years, she helped the group raise even more to benefit students.

Vollbrecht worked as Auction Manager at WQLN, Erie’s public broadcast company, for many years and was also well known for her sewing skills, working as a self-employed seamstress for more than twenty-five years. She passed away on January 2 at the age of 78.

Yahn graduated from Penn State in 1952 with a degree in engineering. He had an established career with Alcoa and American Sterilizer Co., before starting his own company— Erie Advanced Products and Manufacturing, now known as Advancing Finishing USA.

Over the years, Yahn, his wife, Patricia, and their family have supported a number of programs and initiatives of the college, including Yahn Planetarium. His son, Greg, is a current member of the college’s Council of Fellows.