The Science of Creativity 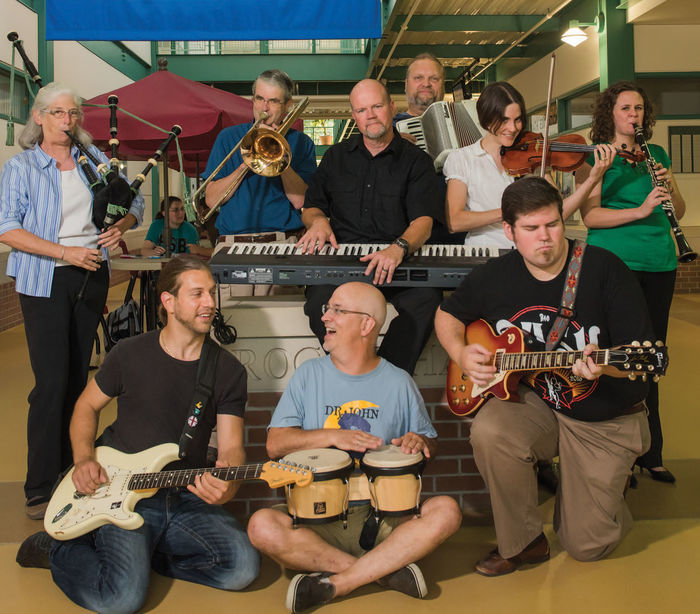 Picture a scientist. Do you conjure an image of a serious researcher in a lab coat and safety glasses peering through a microscope or precisely measuring chemical solutions?

How about a ponytailed mathematics lecturer behind a keyboard, rocking out with a biology professor banging away on a set of drums? What about a trombone-playing physics lecturer pinch hitting in the Behrend Concert Band and Jazz Ensemble after teaching a class on quantum physics?

It might seem incongruent—a methodically-minded scientist and an arts-minded musician—but more than a dozen musically-inclined professors in the School of Science say the two go together like organic chemistry and carbon.

“People sometimes think science is about memorizing facts, but it’s really about discovering facts and wringing answers out of nature,” said Dr. Pam Silver, a distinguished professor of biology who has played the bagpipes since she was seven years old. “When you have a scientific question, it takes a lot of creativity to find the answer to it.”

Silver serves as Pipe Major for the 96th Highlanders Pipes & Drums Corps representing Jamestown and Chautauqua County, New York. She says playing makes her “totally happy and satisfies a fundamental need” in her life for order and beauty.

“In mathematics, I’m always solving problems, which is an art. Music is no different as one must practice to achieve the right sound.”

The science of music

Dr. Lauren Falco, a lecturer in physics, has studied acoustics since graduate school, but she’s played the violin since kindergarten.

“I was five when I started,” said Falco, who occasionally plays in church or at weddings. “There’s a certain rigor to developing musical technique that is not unlike learning a scientific process. For me, it’s very satisfying to understand the mathematics and the physics behind the instrument, the ‘why’ and ‘how’ of the sound.”

Falco periodically teaches a science of music course in which students explore acoustics, instruments, sound waves, and how the ear works. Their final assignment is to make an instrument that can be played.

“I’ve had PVC pipe flutes and cigar-box guitars,” she said. “One student made a clarinet out of a carrot.”

‘Music is all math’

“Music is all math and logic,” said Dr. Daniel Galiffa, an associate professor of mathematics who has played guitar, bass guitar, and drums for nearly two decades.

Jodie Styers, a lecturer in mathematics education, plays clarinet, flute, piccolo, and alto saxophone and has even been a pit musician for live theatre productions. She says music helped her through school.

“When I started playing in grade school, my performance and behavior at school improved,” Styers said. “I got to leave class for lessons and that ‘break’ in my school day made it easier for me to sit still and concentrate when I returned.”

Today, Styers says playing music is a form of relaxation. “It allows me to exercise a different skill set than I use dayto- day when I am teaching.”

Jonathan Hall, senior lecturer in physics, has played trombone for half a century and has even stepped in to play with Behrend student ensembles when needed.

“Music is, and has always been, a part of every culture in the world,” he said. “Listening to music is great, but when you make music, you’re participating in an activity of the human experience that goes back thousands, if not tens of thousands, of years.”

Dr. Gary Viebranz, senior lecturer in music and director of instrumental ensembles, is not surprised by the number of scientists who are musicians.

“Both disciplines require abstract thinking and willingness to build something from nothing,” said Viebranz, who plays the tuba and several other instruments. “Albert Einstein actually credits playing the violin with his most famous revelation, the Theory of Relativity.” (Einstein called it a “musical thought” that came to him intuitively.)

Informed of the current wealth of musicians in the School of Science, Viebranz had his own revelation: “It would be fun to put together a faculty concert,” he said.

Some faculty members already play together, including Dr. John Steffen, associate professor of biology, and Paul Olson, lecturer in mathematics. Steffen, who plays drums as well as guitar and piano, said he and Olson, who plays piano and keyboards, are in a group called the Hudson Road Jam Band. They play at parties and public events.

Olson, who grew up in a musical family, plays with other groups as well, and occasionally performs as a solo act.

“Music can be an abstract form of communication,” he said. “It’s also a universal language. In science, we often look for patterns in our investigations. These are some of the common elements between science and music.”

Steffen says he couldn’t imagine his life without music.

“Music and drums were my first love,” he said. “When I play, especially in public, I enter this zone where I feel completely centered. Music has the power to make everyone—the musician and the listener—feel better.”