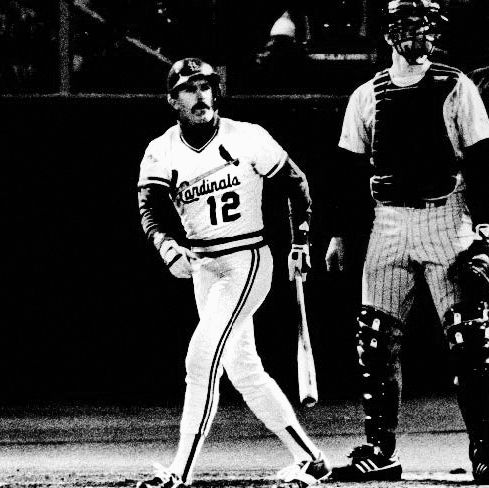 Penn State Behrend alumnus Tom Lawless ’80 played parts of eight professional seasons, but he’s most remembered for the three-run home run he hit in game four of the 1987 World Series. Here, Lawless is pictured immediately after he hit the ball. Once it was clear that the hit was a home run, Lawless seamlessly flipped the bat over his back, which remains an iconic postseason moment in Major League Baseball history.

It’s been twenty-eight years since game four of the 1987 World Series, but Tom Lawless ’80 remembers it like yesterday.

With his St. Louis Cardinals tied at 1-1 with the Minnesota Twins, the Penn State Behrend alumnus and Erie native stepped to the plate with no outs and two Cardinals on base. The infielder had gone just 2-for-25 over 19 games that season, and here he stood, with the opportunity to create some October magic.

“It was just a 2-0 fastball that I got a good swing on, but it was 45 degrees that night and you really don’t know how the ball is going to carry. I knew I hit it well, and I knew it had a chance,” said Lawless, who played parts of eight Major League Baseball seasons with the Cardinals, Montreal Expos, Cincinnati Reds, and Toronto Blue Jays. “You don’t go up there and say you’re going to hit a home run and throw the bat, but when you know games are crucial, your emotions are running high, everything takes over and your body does things it wouldn’t normally do.”

When the bat hit the ball, Lawless took a few steps forward and watched to see if it would clear the fence. When it did, he seamlessly flipped the bat over his back, inadvertently cementing himself as part of MLB postseason lore.

Hyperbole? Not according to St. Louis Cardinals’ director of communications Brian Bartow.

“Tom Lawless’ 1987 World Series homer set off a spontaneous and somewhat rare show of emotion, but for whatever reason, it seemed fitting having come from a player who was not known for his hitting prowess,” said Bartow, who had worked for the team only nine months at the time of Lawless’ historic flip. “To this day, it remains an iconic image in both Cardinals and World Series history.”

Lawless’ marquee moment once again became a topic of discussion this postseason after Toronto Blue Jays’ outfielder Jose Bautista enjoyed a similar moment. On Oct. 15, 2015, in game five of the American League Divisional Series, Bautista hit the game-winning, series-clinching three-run home run to lead the Jays over the Texas Rangers. After the blast, he methodically flipped his bat forward.

t was a historic moment for a Jays team that had not reached the American League Championship Series in more than 20 years, but Lawless is not ready to relinquish his “King of the Bat Flip” title just yet.

“I think it was just a touch below mine,” Lawless said with a chuckle. “I don’t think he got enough air with his bat. Mine got a little more height on it while his was more of a line drive bat flip.”

A lesson in perseverance

The fact that Lawless ever found himself in such a situation remains an anomaly. Division III baseball players rarely transition to the pros. It’s even more surprising considering that Penn State Behrend’s baseball program was still in its infancy when he played for the Lions from 1975-78.

“I really enjoyed playing my four years there, and I give a lot of credit to (former Behrend Coach Clarence) ‘Shorty’ Stoner because he taught me a lot of things,” Lawless said. “My big thing was perseverance. You’d have a lot of people say you can’t do this and you can’t do that, and I never believed that. I had one thing on my mind. I wanted to play baseball, and I wanted to make a career out of it. When you play that way, always looking over your shoulder, you’re probably going to do your best, and that’s what it takes.”

Since 1992, he has been coaching at both the minor league and major league levels. He is currently a free agent, but is exploring opportunities to join another MLB organization for the 2016 season.

“I’m going to look around Major League Baseball and see if something fits for me,” Lawless said. “I feel like I still have a lot to offer, especially from the teaching perspective. I don’t feel like my adventure is over yet.”