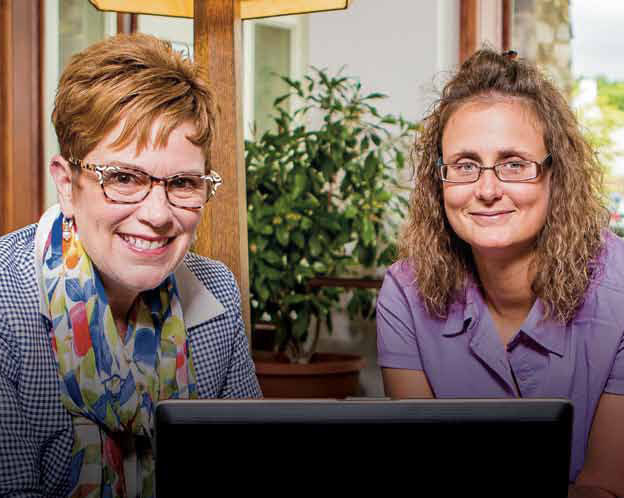 One of the most intriguing aspects of life is how a seemingly inconsequential instance—a chance encounter, a gut-feeling, a serendipitous meeting—can set in motion a chain reaction that leads to monumental change.

In 2007, Yvonne Folmar ’07 was a 27-year-old Penn State Behrend Accounting major who had just left an Erie transitional living center for single mothers. She had a 2-year-old, was without a car, and was working multiple jobs while trying to earn a degree.

One of those jobs was in the education department at the Erie Zoo, where she helped teach classes . Dropping off her own son at Dinosaur Camp one day, Dr. Mary Beth Pinto, professor of marketing, recognized Folmar as a Black School of Business student and struck up a conversation. It would forever change the direction of Folmar’s life.

“Dr. Pinto really took me under her wing after that,” Folmar said.

“Life had knocked Yvonne down, so to speak, and she was facing a lot of challenges,” Pinto remembered. “She needed encouragement and she needed to know that someone believed in her. I tried to fill that void.”

Folmar was struggling in the Accounting major and wanted to switch to Marketing but she was concerned about having to take calculus to earn either business degree. Pinto suggested another path—majoring in Communication with a Marketing focus to get the business background she wanted within a humanities degree that better suited her innate talents.

“I helped her problem-solve and come up with solutions,” Pinto said, “but she did all the work to make those solutions happen.”

Folmar took all of the business marketing classes she could fit into her schedule. She also took advantage of every internship, job shadowing, and volunteer experience she was offered. She was a two-year recipient of a John M. and Gertrude E. Petersen Trustee Scholarship, which helped to cover the cost of tuition, but she still held several part-time jobs while also raising a toddler and relying on public transportation. Her days often started at 4:00 a.m.

In her junior year, she volunteered to read to underprivileged children through Read Across America. It was there she discovered her love and aptitude for teaching.

Today, Folmar is a homeowner, a mother of three, and a fifth-grade social studies teacher at Agora Cyber Charter School. She also holds a master’s degree in education. She said her degrees perfectly complement her career in online education.

Pinto is proud of her former student.

“My greatest pleasure in my career is celebrating the successes of my students,” Pinto said, “and Yvonne is one of those.”

Folmar is still setting high goals for herself.

“In my annual review this year, I told my principal that proficient isn’t good enough for me,” she said. “To me, success is not just reaching your goals, but doing so in an outstanding manner. I want to be extraordinary.”

We think she already is.

Like Folmar, Sonia Rosales ’11, faced numerous obstacles, including poverty, neglect, abuse, and a chaotic home life, along her journey to Penn State Behrend.

Rosales was born at a Red Cross Shelter in Texas to refugee parents from Honduras who had been granted political asylum in the United States.

The family was resettled in the Erie area and lived in the first Habitat for Humanity house built in the city. But when Rosales was 8 years old, her father abandoned the family, leaving her mother with six children and little income.

“It was a real struggle for my mother, being in her 20s with six kids and no help,” Rosales said. “My siblings and I ended up sort of raising ourselves.”

Rosales’ Erie neighbors and church and school “families” helped, often providing dinner, clothing, and any other necessities the children needed.

“I really don’t know where my siblings and I would be without the legion of women, including Benedictine Sisters Pat Lupo, Annette Marshall, and Kathy Horan, and the teachers from Saint George School, who watched over us,” Rosales said.

Sr. Marshall, who became Rosales’ godmother, personally mentored the bright young girl. “She has been the biggest blessing in my life,” Rosales said. “I tear up all the time just thinking about it.”

When Rosales was a preteen, her mother got remarried and moved the family to Charlotte, North Carolina. Rosales missed Erie and the support system she’d left behind.

Sr. Marshall offered Rosales the opportunity to move back to Erie and live with her and the other sisters at Mount Saint Benedict Monastery while attending Villa Maria Academy. Rosales’ mother dropped her off and drove away without saying goodbye.

“To this day, I don’t know if it was because it was hard for her or because of our strained relationship,” Rosales said.

The two are still estranged, despite Rosales’ attempt to reconcile.

“I don’t hate her at all,” Rosales said.

“I can’t imagine the hardship she dealt with and I know that hurt people do hurtful things. I forgave her a long time ago. I had to. Forgiveness played a huge role in being able to accomplish my goals.”

Among those goals? A college degree.

Math and science came naturally to her, so Rosales enrolled as a Mathematics major, but later switched to History.

“History was challenging for me,” she said. “It made me exercise parts of my intellect that I struggled with, like critical thinking, analytics, problem solving, writing, and doing research. Also, I wanted to feel more connected to something. I like knowing that we’re all tiny threads in the historical tapestry of the world.”

While at Behrend, Rosales also worked several jobs and was active in clubs and organizations on campus, including her sorority, Alpha Sigma Tau. Few knew Rosales’ background.

“I thought it was best to keep my family issues to myself, but that was sometimes a struggle with some of my peers because they didn’t know what I was dealing with,” Rosales said. “Their normal issues and aggravations were things that didn’t weigh heavily on me because I had bigger burdens.”

And therein lies the gift—if there is one—in a tumultuous upbringing.

“Like everyone else, I have bad days, but I continuously remind myself that I’ve been through much worse,” she said.

After graduating from Behrend, Rosales moved to Charlotte to be nearer to her siblings. She’s very close to two of her sisters; they talk almost every day. Rosales works at Electrolux as an accounts receivable analyst, a job she said she loves. She has a car, an apartment, a solid network of friends, and two rescue dogs that she adores.

“Education was an escape for me,” she said. “I was determined not to be a statistic, but sometimes I still marvel at how it all happened.”