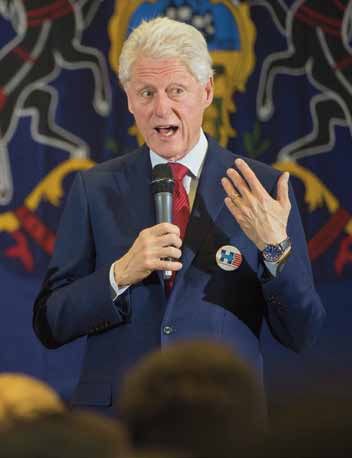 Former President Bill Clinton visited the college this spring to campaign for his wife, Hillary.

Students had a great opportunity to experience a political rally firsthand when former President Bill Clinton visited the college this spring to campaign for his wife, Hillary. He spoke to a standing-room-only crowd of about 1,200 in Erie Hall.

Behrend’s Supermileage team—largely composed of engineering students, but open to all Behrend students—work throughout the academic year to design and build a vehicle that can squeeze the most mileage out of a single tank of high-octane gasoline.

“As a team, we blow the horn pretty proudly over the 2,500 m.p.g.,” said Rich Englund, associate professor of engineering and faculty adviser to the Supermileage team. “We’d rather come in second with 2,500 m.p.g. than first with 1,500 m.p.g.”

Students, parents, faculty members, and staff can sign up to receive emergency text alerts and be among the first informed when important weather or emergency information needs to be conveyed. Enroll at psualert.psu.edu. Be sure to select “Behrend” when registering to receive text messages specific to Penn State Behrend.