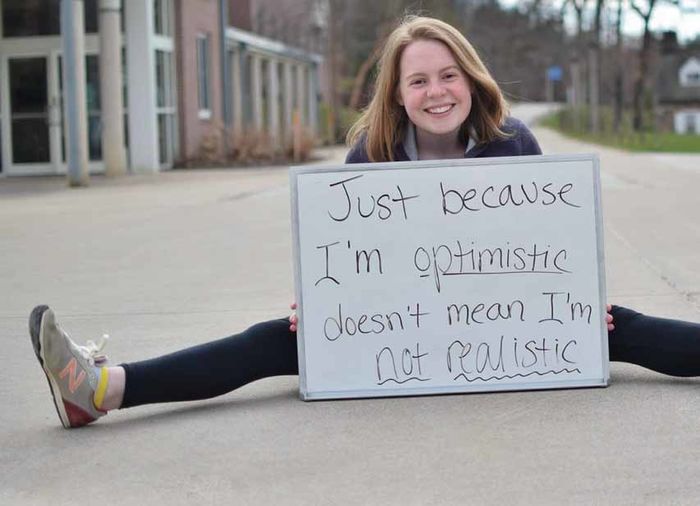 Passing students on campus were stopped and asked with his to write about stereotypes they faced.

As a shy, hijab-wearing Muslim from Malaysia, Myzatil Aqmar Shaharom Nizam knows what it’s like to be stereotyped

People make assumptions about her. For instance, that she is required to wear a hijab.

“Sometimes, friends will say, ‘Your parents aren’t here; you can take it off,’” she said. “But I wear a hijab because I want to wear it. I’m not forced to.”

As a student, Shaharom Nizam, who graduated in May with dual degrees in International Business and Project and Supply Chain Management, had been involved with the college’s Muslim Student Association, trying to break stereotypes of Muslims when she realized that she, too, had assumptions about other people.

“So I joined the Multi-Cultural Council (MCC) because I really wanted to learn more about others,” she said.

As vice president of the MCC, Shaharom Nizam worked on increasing cultural awareness and sensitivity at Behrend by helping to organize events such as Behrend International Night, the Harambee Dinner, and Hijab Day.

“But I realized that those who attended were the ones already inclined to go,” she said at the time. “I wanted to come up with something more public that could help educate everyone on campus about stereotypes.”

Andy Herrera, director of educational equity and diversity programs, suggested Shaharom Nizam try a format that had worked for an earlier diversity project in which students were asked to write a question on a whiteboard for students in China to answer (and vice-versa).

“I really liked the idea because it gave people like me who are shy a way to express their thoughts, not so much with their lips, but with their words,” Shaharom Nizam said.

She recruited an outgoing, extroverted fellow MCC member, Bhuri Rodprasert, to help her with the project, which they called “Share Your Voice.”

Rodprasert, who goes by “Bruce” and is a talented amateur photographer, was all in.

Rodprasert, who plans to major in Geoscience at University Park, said he enjoys meeting new people and agreed to participate for the fun of it.

It was Rodprasert who, this spring, stopped passing students with his whiteboard and camera and asked them to write about stereotypes they faced. He and Shaharom Nizam soon found the question was too open-ended.

“They didn’t know what to write, so we came up with a template of ‘Just because I’m [blank] doesn’t mean I’m [blank]” and asked them to fill in the blanks,” Rodprasert said. “They had a much easier time with that.”

In just a few hours, Rodprasert and Shaharom Nizam collected more than seventy answers and photos.

Responses touched on a wide range of topics, from race to nationality to personality to hobbies to majors.

“Some of the responses had a very deep message,” Rodprasert said. “Some of them truly surprised me.”

Shaharom Nizam, too, said she learned a lot from the project.

“I realized that every person faces some sort of stereotype,”she said.

When they were done interviewing students, Herrera printed the photos and Shaharom Nizam hung them on the windows outside of Bruno’s Café in Reed Union Building—a perfect hightraffic spot to reach a large campus audience.

The Share Your Voice exhibit caught plenty of eyes and generated positive feedback.

Shaharom Nizam, who returned home to Malaysia after her graduation, said it’s something she hopes future MCC members will continue.

“I think it was very educational,” she said. “It was just a simple sentence, but it spoke volumes.