Books Not the Only Measure of Growth at Lilley Library 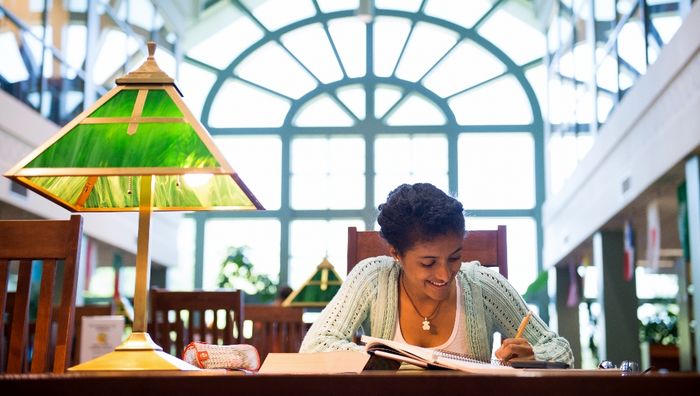 The John M. Lilley Library at Penn State Behrend has adapted to the "knowledge commons" model of learning support: video booths, post-production software and technical help for faculty members who use media technology in their teaching.

In September, in the gallery space near the entrance to the John M. Lilley Library, Stephanie Diaz and some friends read, over ten hours, the entire text of To Kill A Mockingbird.

“People think a library has to be a quiet, stuffy place,” Diaz, a reference and instruction librarian, said during a chapter break. “Part of this building is quiet, and there’s value in that. It allows you to enter that mental space where you’re ready to work. But there is a lot more to what we do here.”

As the college has grown, the role of the library has evolved. The entire book collection once fit into what is now the Studio Theatre. Seating was limited to thirty-six, at tables lighted by wagonwheel chandeliers.

In 1962, the library was moved to Turnbull Hall, with shelving for 10,000 books. In 1968, the collection was transferred to Reed Union Building and what is now McGarvey Commons – a “temporary” setup that would exist for twenty-six years.

The current library – a three-story facility named for former Provost and Dean Dr. John M. Lilley – has adopted the “knowledge commons” model of learning support. It offers collaborative learning spaces, including a One-Button Studio with video and post-production software, and support for faculty members who incorporate media technology in their teaching.

As the reliance on print materials has ebbed – most academic journals are now available in digital formats – the library staff has repurposed shelving space, creating group study rooms and a computer help desk. They also have added video editing booths and a digital humanities lab. The gallery, which is used for art and archival displays, including the annual student art show, has been enhanced.

“Our thinking has changed,” said Dr. Rick Hart, the library’s director. “We’re a lot more open to trying different things, including original programming, to engage with students in ways that help them think of the library as a resource, hopefully for the rest of their lives. That really fits into the lifelong-learning aspect of what college is all about.”

Tutors at the college’s Learning Resource Center, which is housed within the library, provide nearly 7,000 review and test-prep sessions every year. The librarians also teach: They led more than 200 classes last year, providing instruction in research methods and information literacy.

“It’s a different role,” said Russ Hall, associate librarian. “When I started in 2002, librarians were sort of the gatekeepers of information. Now, we’re more like lighthouse keepers, helping to cut through the data fog.”

That collaborative, active-instruction approach has brought another change to the library, particularly on the main floor, near the doors, which students enter more than 6,000 times every week: It’s louder.

“It’s a congregation point,” Hart said, “and that’s a good thing. It shows that students are taking advantage of the resources we have here.”

The staff actually prefers the added noise. When students approach the reference desk and whisper a question – even on a quiet day – the librarians routinely ask them to speak up.

“The truth of it is,” said Jane Ingold, associate librarian and the curator of the college archives, “I am far more likely to be shushed than to shush.”