Innovative research is a hallmark of Penn State Behrend. 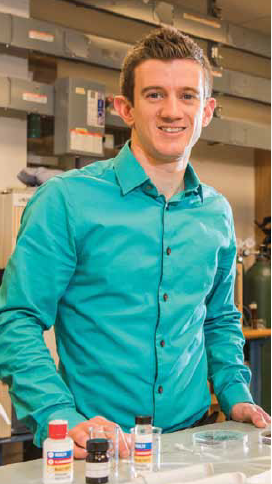 Today’s smartphones rarely make it through the day without needing a charge. Portable power banks are great, but they require forethought to charge in advance and take just as long to power up your device as an electrical outlet does.

What if you had a portable device about the size of a business card that would provide instant recharging? Imagine: no more lingering around outlets at the airport, being tethered to an outlet in your office, or sitting in the car to give your phone a few more minutes on the USB adapter.

It’s not wishful thinking, but a real project that Dr. Adam Hollinger, assistant professor of mechanical engineering at Penn State Behrend, and several engineering students have been working on using fuel cell technology.

Hollinger believes that fuel cells, devices that generate electricity by chemical reactions, could be an attractive alternative to lithium-ion batteries.

“There are two basic challenges with fuel cells that have to be solved to do that, though—weight and manufacturing cost,” Hollinger said. “Fuel cells are typically encased in metal, which makes them heavy and impractical for portable use. The obvious solution to that would be to use plastic instead.”

To that end, Hollinger has been collaborating with the college’s Plastics Engineering Technology program to develop an electrically-conductive polymer by mixing conductive filler such as copper nanoparticles or carbon nanotubes into a polymer.

Hollinger explains, “there are two layers within the fuel cell called the bipolar plates that need to be electricallyconductive. Typically these are metal, but if we can replace that metal with our polymer, it would make the cell both lighter and inexpensive to manufacture.”

It’s an equation that Hollinger says technology companies will be quick to embrace.

“I know that Samsung and a few others are already researching fuel cell technology,” he said. “It not only offers an immediate recharge, but also may improve battery life.”

With the Pew Research Center estimating cell phone ownership among adults in the United States at more than 90 percent, that’s a research project that can truly benefit everyone.

One hundred million years ago, during the late half of the Cretaceous period, when global temperatures were considerably warmer and the Arctic was largely ice-free, plate tectonic activity formed a large inland sea known as the Western Interior Seaway.

This vast body of water, extending from the present-day Arctic Ocean to the Gulf of Mexico, divided North America into two land masses. Today, of course, there is no interior sea.

In the last century, scientists have extensively studied the former seaway’s southern areas, which are known to be fossil hotbeds, but its northern counterparts in the Northwest Territories of Canada are so inaccessible that they have been largely untouched. That is until this summer, when an international team of researchers that included Dr. Todd Cook, assistant professor of biology at Penn State Behrend, prospected for ancient fossils at a site about 150 miles northeast of Inuvik, Canada.

The location was so remote that Cook and his fellow explorers—Dr. Matthew J. Vavrek from the Royal Ontario Museum, Dr. Takuya Konishi from the University of Cincinnati, and James Campbell, a doctoral student from the University of Calgary—had to be helicoptered into their campsite. They lived in complete isolation, removed from modern amenities for three weeks as they searched for fossils in the exposed rock, estimated to be about eighty million years old, along the east bank, or Windy Bend, of the Anderson River.

The expedition, primarily funded by the National Geographic Society’s Committee for Research and Exploration and by the Polar Continental Shelf Program, was fruitful.

“We found a lot of fossils from bony fish, including some significantly large fish, as well as ancient marine reptiles and birds,” Cook said.

The team loaded 400 to 500 pounds of rock onto the helicopter for their return flight in August. Once the fossils are extracted from the rocks and cleaned by professional preparers, many of the fish specimens will be sent to Cook for study at Penn State Behrend.

Cook said the significance of the team’s research is three-fold: It sheds light on late Cretaceous vertebrate diversity in a poorly-known region of the Western Interior Seaway; it helps reconstruct the regional paleoecology and paleoenvironment; and it may offer a glimpse of the future response of vertebrate animals to a warming planet. 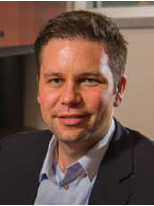 According to Dr. Ryan Vogel, assistant professor of management at Penn State Behrend, most companies have a few misfits, which he defines as employees whose personal values are incongruent with the values of the organization.

“These are employees who feel like they don’t belong and find their work unfulfilling, so they are disengaged,” he said. “They may not even know it or know why, but it affects their work and productivity.”

You may think misfits would (or should) just quit, but it’s not always possible or practical for reasons ranging from financial security to a lack of jobs in the area in which they live.

“My research partners and I wanted to examine the problem from the perspective of the misfit employee and learn what might be done to buffer the detriments of not fitting with a company’s values,” he said.

Vogel and two University of Georgia professors conducted a survey of 200 employees from a wide variety of disciplines and companies.

Their research uncovered two potential proactive strategies—job crafting and leisure activities—that enabled misfits to maintain levels of engagement and performance similar to their colleagues who did fit within their organizations.

“Job crafting refers to an employee’s actions to shape, mold, and redefine their job in an attempt to improve their experience at work,” Vogel said. “Leisure activities refers to things they do for fun when they are not at work.”

The takeaway for misfits: “You can make a poor job fit a more tolerable situation,” Vogel said. And, for managers: “Offering your employees some autonomy in how they spend their time and who they work with can lead to increased productivity. Let them play to their strengths. Also, encourage and support their off-the-job pursuits.”

Vogel said forward-thinking companies should not eliminate misfits, but embrace them.

“Without the fresh thinking that can come along with having a few misfits, organizations cannot grow or evolve and so they tend to fail in the long run,” he said.

Vogel’s research findings were published in the October 2016 issue of the Academy of Management Journal.

Every one of us occasionally needs a place to be alone to think, recharge, and relax—even children.

While some may think a preschooler in hiding would be cause for alarm, research conducted by Dr. Kim Corson, assistant professor of educational psychology at Penn State Behrend, suggests otherwise.

“Secrecy and hiding tend to have a negative connotation to adults who often associate those words with shame or deceit,” Corson said.

But, to young children largely unburdened by the emotional baggage that comes with maturity, hiding and secrecy are positive things.

Corson wanted to examine secrets created by children’s own thoughts and experiences. She chose to focus on hiding places and quickly discovered that “they see hiding places as something magical, and they associate the secrets they create themselves with happiness and positive qualities.”

She interviewed more than 100 children between the ages of 3 and 5 in Houston and Lubbock, Texas, while working on her Ph.D. at Texas Tech University.

“Every child could name at least one hiding place they used when they wanted to be alone,” she said.

Often those places are protected by borders, either real ones, such as blankets, boxes, or doors, or imaginary ones, such as lasers, rivers, or even “magic.”

“The idea of borders is important because it shows that children as young as three understand they need to be physically hidden from view for a space to be secret, but they also want the safety of knowing their families can find them,” she said. “The imaginary borders are a compromise.”

The children reported using their private hideaways for a variety of reasons—to think, to read, to play with pets, to jump out and scare their siblings, to conceal things from their parents, and, often, to manage their emotions.

“They told me they would go there when they were angry or sad, or just wanted to be out of the eye of others,” she said.

Sound familiar? It’s similar to what we do as adults.

“We all have individual, social, and collective reasons for our ‘borders’ and ‘hiding places’ in whatever