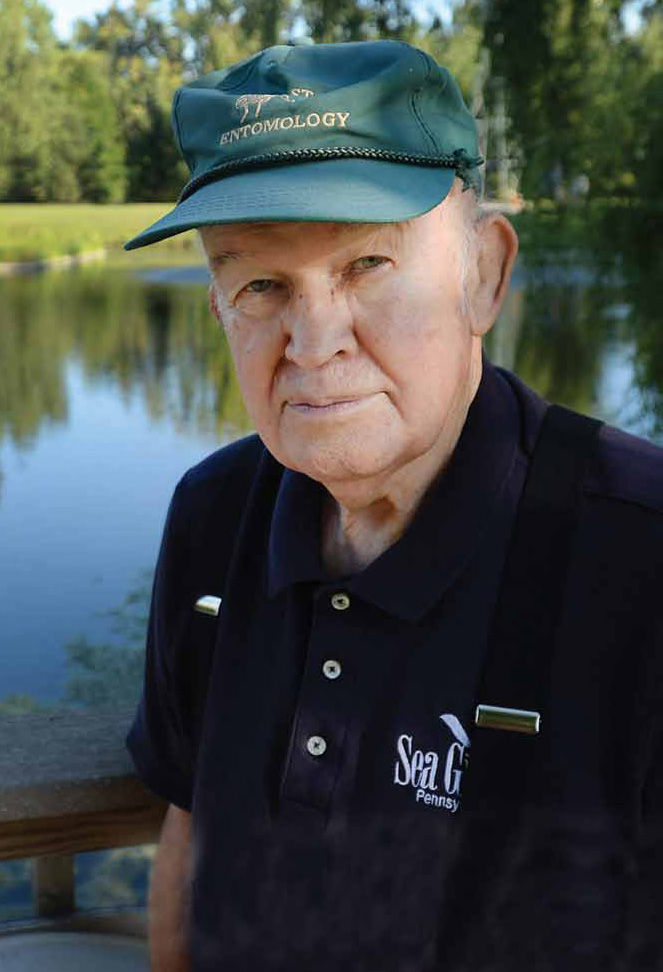 Dr. Ed Masteller, professor of biology emeritus, retired from teaching classes at Penn State Behrend in 1993, but he has never stopped educating.

Today his student body is the nearly 300 residents of Springhill, a retirement community in Erie. They are a little older than his Behrend students, but no less enthusiastic when Masteller suggests an environmental improvement project or leads educational nature walks on Springhill’s beautiful forty-five-acre property.

Since moving to Springhill four years ago, Masteller, 82, has spearheaded the planting of a butterfly garden, the installation of floating islands designed to improve the water quality of the Springhill pond, and assembled a team of residents to participate in Project BudBurst.

Masteller, who had read about Project BudBurst in a scientific magazine, assigned each BudBurst volunteer a tree on the Springhill campus. Residents recorded the appearance of buds, leaves, pollen, fruit, and flowers. Information collected was then entered online. Springhill logged more than 100 data entries on the Project BudBurst website.

“This information will help scientists better understand climate change,” Masteller said. “Things have moved up a week in the growing cycle and people need to understand that humans are really having an effect, and not a good one, on the environment.”

Masteller, however, is having a positive effect on his fellow residents.

“He’s been such an asset to our community,” said JoAnn Hofman, a Springhill resident and BudBurst volunteer. “I don’t know if there’s anyone more influential here than Ed.”

“He inspires a lot of the residents to get moving and get involved by getting these projects started,” Hetrick said. “He’s constantly encouraging people to stop and enjoy nature, especially younger people like me who spend too much time looking at screens.”

“Project BudBurst was an important citizen science project, but my goal was also to help people become aware of nature around them,” Masteller said.

Masteller became passionate about nature and insects after doing a field study course at Iowa Lakeside Lab in Okoboji. At the time, he was teaching high school biology in Minnesota. The course, however, stayed with him and, a few years later, he decided to go to graduate school. He then dedicated his life to helping others to appreciate the natural world, teaching biology to Penn State Behrend students for twenty-six years and cataloguing insects, plants, birds, and fish as the first volunteer curator of the Natural History Museum at Erie's Tom Ridge Environmental Center.

Residents and friends filled the holes in the islands with about 500 native wetland plants, such as swamp milkweed, Emory’s sedge, and iris versicolor. The roots of the plants extend into the pond and should consume excess nutrients like nitrogen and phosphorus that can cause algae blooms.

“They act as a natural filter,” he said. “They can improve the habitat for amphibians, reptiles, birds, and insects.”

Masteller called the ponds “minimally successful,” but said that they are a work in progress.

“We have a couple of things to try to improve the islands for next year,” he said. “We know it’s not going to happen overnight. You can’t rush nature.”

Island plant improvements are not the only ecological plan Masteller is pondering, a point made clear when he said, “Oh, I’ve got my eye on a few more things we can do here.”

Hetrick is not surprised by Masteller’s energy or ambition.

“You can’t stop the man; he will educate until his last day,” Hetrick said with a laugh. Here’s hoping the lectures and hands-on lessons go on for years.