A Team in Transition 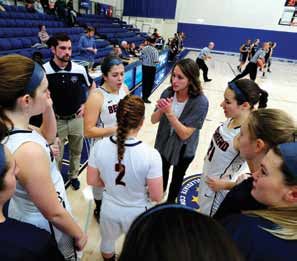 Three years ago, the outlook for the Penn State Behrend women’s basketball team was far from clear.

Comprising mostly first-year students, the team had just finished a disappointing 4-20 season. Roz Fornari, the head coach for twenty-one years and the winningest coach in the program’s history, had recently retired.

Turning the team’s fortunes around, while also providing the consistent leadership that had been a staple of Fornari’s tenure, was going to be a tall task.

The Beaver, Pennsylvania, native, who was hired in the summer of 2014, was an unconventional choice for a college-level coach. She had no previous experience as a head coach and was only three years removed from a playing career at Grove City College.

But the hiring committee surmised she had traits that were every bit as important as experience: energy, excitement, and a commitment to getting better every day.

“I was just so excited that since the season had just ended, things could only go up from there,” she recalled. What Slater lacks in experience she seems to make up for with intuition and empathy.

“I think I understand our players, which helps me build strong relationships with them,” she said. “That gets harder as you get farther away from their age, so that’s been one of the benefits of being a younger coach.”

“She was in our situation before and not long ago,” said guard Sadie Zielinski, a senior Science major. “Knowing that really helps.”

That does not mean the transition to head coaching was an easy one.

“It was a challenge,” Slater said. “I remember thinking, ‘Oh, I have to be the one to make this decision now.’”

Her players say she has handled the transition well.

“She has grown as a coach, and consequently, we’ve grown as players,” said Rachael Razzano, a senior Accounting major and guard on the team. “She just has a different mindset. For example, we’re using a totally different offense this year. She’s open to changing offenses and defenses whereas someone who has been doing this for twenty years might not be so flexible.”

One of the most significant growth moments for Slater and the team came on January 10, 2015. It was Slater’s first season as coach, and the team had opened with eleven straight losses.

“(The game) was against Franciscan, and it was the twelfth game,” Slater said. “I had stressed repetition after repetition, and then you could just see it. The light went on, and they could see the future.”

The team would rally in the final minutes to earn a 59-56 victory.

“It was so refreshing,” said Erika Woll, a junior Finance major and a guard on the team. “Losing is exhausting, but when we finally won a game, it was like, ‘Okay, we can do this.’”

Slater can be tough, and she knows it. Her Practices are intense, and she stresses structure and repetition. She makes no apologies for it. It’s what has helped the team turn around in such a short time.

“The repetitions help because, by the fourth quarter and as the season goes on, we’re still fresh whereas other teams in our conference are tiring out,” Zielinski said.

That proved true during the 2015-16 season, Slater’s second as head coach. The Lions finished 15-12 but played their best basketball as the year progressed. In the final month of the season, the team won six straight games to secure the No. 2 seed for the AMCC playoffs. The NCAA even recognized the Lions as the No. 15 Most-Improved Division III team for that season.

While the Lions fell short of winning the AMCC Championship, the team’s position in the final standings showed a marked improvement from Slater’s first season at the helm. It also firmly put that 4-20 season in the rearview mirror.

Under Slater’s leadership, the team is not looking back. They are focused forward and predicting a bright future for the Lions.

“We all continue to grow together,” Woll said. “We all have so much confidence, and we’ve all worked really hard. I’m so excited for what’s to come.”