“Blending ETAP into our Power System Analysis curriculum, which is being offered for the first time at Behrend, gives student an excellent opportunity to learn and apply essential power system concepts,” Rasouli said. 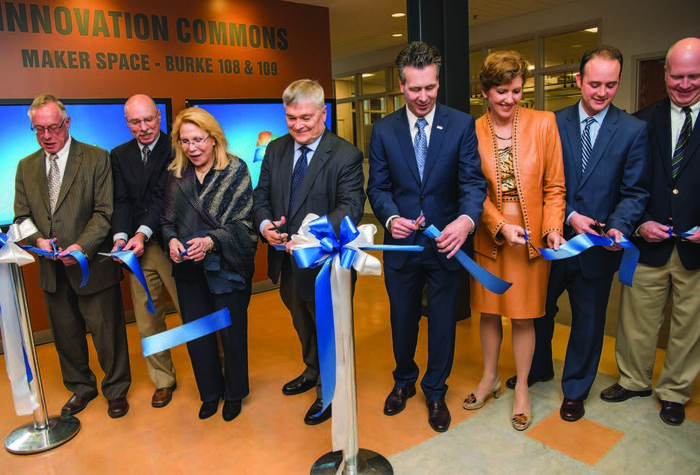 There are many labs in Burke Center, but none like the newest one. Innovation Commons is an idea laboratory, maker space, technology playground, legal office, marketing agency, and entrepreneurs’ gathering spot all under one roof and adaptable to the needs of inventors and entrepreneurs.

The lab, which is equipped with 3D modeling/design/analysis software, scanners and 3D printers for prototyping, was partially funded by a $50,000 Invent Penn State seed grant. Invent Penn State is an initiative launched last year to leverage the University’s research, knowledge, and entrepreneurial spirit in order to drive job creation, economic development, and student career success.

Student hackers do well in competitions

When it comes to cybersecurity, it’s common to fight fire with fire. For every hacker with criminal intentions, there are dozens of “good” hackers working to thwart them and protect companies and consumers from malicious software and cyberattacks.

“CTF is the most influential hacking competition for college students and one of the best venues for our cybersecurity students to practice offensive security skills they’ve learned at Behrend,” said Dr. Meng Su, associate professor and chair of computer science and software engineering.

Behrend’s team hacked its way to the top, ranking in the top 10 percent of the 2,400 teams that participated!

The API (Application Programming Interface) Challenge awarded $2,500 in bitcoins, a digital currency, to the team that used the API library in the most creative and useful way.

Rattay and Hansen’s team won the competition with Coin Rider, a game developed to teach users how the Bitcoin market works.

Dr. Wen-Li Wang, associate professor of computer science and software engineering, has returned from a sabbatical where he researched wind energy storage/generation and algorithms to minimize the cost of green power network connections spreading over diverse terrains. Dr. Rob Weissbach, associate professor of engineering, will begin a one-year sabbatical this fall. He plans to conduct research that will improve prediction of the energy storage needs of an off-grid residence through improved simulation of the variation of available wind energy at a given site.