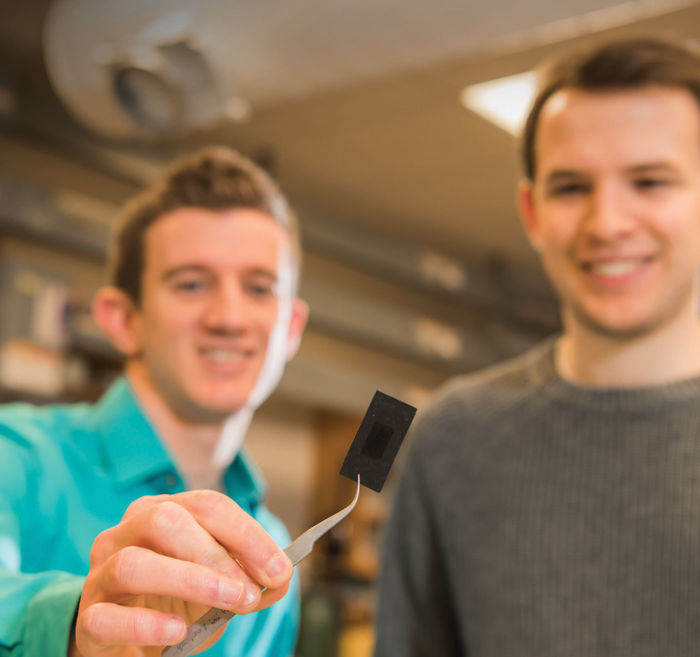 Who hasn’t found themselves tied to an outlet, waiting for a device to charge? Sure, there are portable power banks, but they require the forethought to charge in advance and take just as long to power up as your phone.

What if you had a portable device about the size of a business card that allowed instant recharging? Imagine: no more lingering around outlets at the airport or sitting in the car to give your phone a few more minutes on the USB adapter.

It’s not wishful thinking, but a real project that Dr. Adam Hollinger, assistant professor of mechanical engineering, and four School of Engineering students have been working on using fuel cell technology.

Fuel cells, devices that generate electricity by chemical reactions, aren’t new. They’ve been used in the auto, military, and aerospace industries for at least a decade. But Hollinger, who first started researching fuel cells as an undergraduate at Penn State ten years ago, wondered if it would be possible to create a fuel cell that is an attractive alternative to lithium-ion batteries.

“There are two basic challenges with fuel cells that have to be solved to do that, though—weight and manufacturing cost.” Hollinger said. “Fuel cells are typically encased in metal, which makes them heavy and impractical for portable use. The obvious solution to that would be to use plastic instead.”

What polymer blend to use has yet to be determined, but when he’s ready to tackle that problem, Hollinger expects to enlist help from the college’s Plastics Engineering Technology program.

For now, he and his students—Dan Doleiden, Nazlihan Argun, Paul Montagna, and Lauren Bertges—have been concentrating on reducing the manufacturing cost of fuel cells.

Doleiden, a senior Mechanical Engineering major, has been working on the project with Hollinger for three years. His efforts have garnered him several research awards—including five fellowships from the School of Engineering, the 2015 Penn State Behrend Undergraduate Research Award, and an Erickson Discovery Grant from the University.

“I’m involved in every step of Dr. Hollinger’s research, and I think that’s a really unique opportunity that few undergraduates are given,” Doleiden said.

“Right now, we’re improving a mathematical model of direct methanol fuel cell performance,” Doleiden said. “Though it’s only partially complete, the model shows promise as a tool for optimizing and simulating the effects of input parameters such as flow chamber geometry and fuel molarity.”

The model will be important for reducing production costs of the fuel cells and streamlining the design process.

“Ultimately we hope to develop a tool that allows researchers and designers to simulate methanol fuel cell designs without the necessity of constructing the physical components,” Doleiden said, “This will reduce the reliance on iterative fabrication, which will result in significantly accelerated design and less budget strain.”

It’s an equation that Hollinger says technology companies will be quick to embrace.

“I know that Samsung and a few others are already researching fuel cell technology. It not only offers an immediate recharge, but also may improve battery life due to the high-energy density of methanol.”

Doleiden and his fellow student researchers are already at work on that, too.

“Our senior capstone project aims to design a portable power source that would be compatible with all USB-based devices, instantly rechargeable, safe, and reliable,” he said.