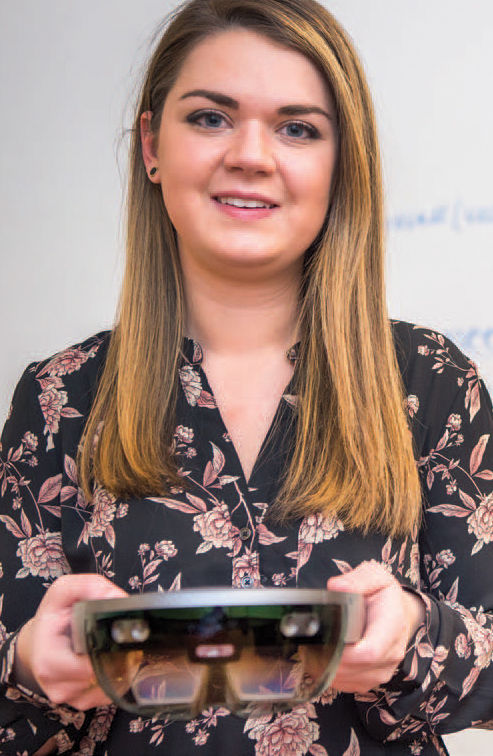 Rachel Rattay has accepted a position as a software engineer at Microsoft in Seattle, Wash., where she will be working on the new HoloLens technology after her graduation in May.

While the TLC has proven to be a valuable and successful training ground, Erie Insurance is continually exploring ways to incorporate additional technology in its training regimen to supplement the in-person experience anywhere in the company’s multi-state footprint.

Enter HoloLens, a holographic computer built into a headset that will enable a user to see and hear a claims experience in a virtual environment. ERIE leadership and a team of three Penn State Behrend engineering students are mapping out how the technology would work for the Fortune 500 company.

The HoloLens is not just a virtual or augmented reality tool, but a mixed reality device that allows for the merging of real and virtual worlds to produce new environments and visualizations where physical and digital objects co-exist and interact in real time.

“This project could allow us to expand the amount of training we can provide,” said Rita Briody, an I.T. analyst at Erie Insurance, who is serving as a mentor on the project with her colleague, Brett McCorkle.

“It’s been great working with the students and faculty members in the School of Engineering over the last couple of years,” Briody said. “We have found that we learn as much from the students and professors as they do from us.”

Through its open-lab approach, Penn State Behrend fosters and encourages close ties and partnerships between industry, faculty members, and students as these collaborations generate benefits for all involved.

The Erie Insurance HoloLens project came about when Rachel Rattay, a Software Engineering major who did a summer internship at Microsoft, caught the attention of Mary Jo Ingalls, a member of the School of Engineering’s Advisory Board and an I.T. supervisor in Talent Acquisition and Development at Erie Insurance.

“We were familiar with the HoloLens technology, so when I learned Rachel was going to be working with it, I knew we might have the makings of a senior design project,” Ingalls said. “Using the HoloLens to train claim handlers has the potential to further enhance training.”

Rattay, who has accepted a job at Microsoft after her graduation in May, was eager to continue working with the HoloLens.

“This is what I’m going to be doing at Microsoft,” she said. “Developing software for the HoloLens is very specific, so I’m happy that I’m not going to be rusty when I return.”

While Rattay was familiar with the HoloLens, the technology has been all new to her teammates on the project—Software Engineering major Mason Toy and Computer Science major Will Emmel. They say it has been an exciting endeavor.

Emmel adds that the Erie Insurance project is an opportunity to gain experience with cutting-edge technology. The HoloLens, which is estimated to cost about $3,000, is in a development-only stage and won’t be available for sale to consumers for at least two more years.

“The bottom line is that we’re working with groundbreaking technology,” he said. “That’s pretty cool.”

Erie Insurance thinks so, too.

“Not only is the technology something people have never experienced, but the team has done an excellent job of applying it to insurance-specific use,” McCorkle said.

The students said the HoloLens device is intuitive for users, but less so for the developers, programmers, and engineers behind it.

“Writing and designing for it is a little different,” Rattay said. “We use a 3D editor called Unity to import scans of the room, but finding art of kitchens, bathrooms, and living rooms has been hard for us. So our rooms aren’t ‘pretty.’”

That’s OK with Erie Insurance, which is simply looking to better understand how the technology can be used. Aesthetics like window dressings, carpeting, and wooden cabinets can come later.

“We anticipate the team will deliver an excellent demonstration of the HoloLens’ capabilities, and their work will act as a starting point for future development,” McCorkle said.