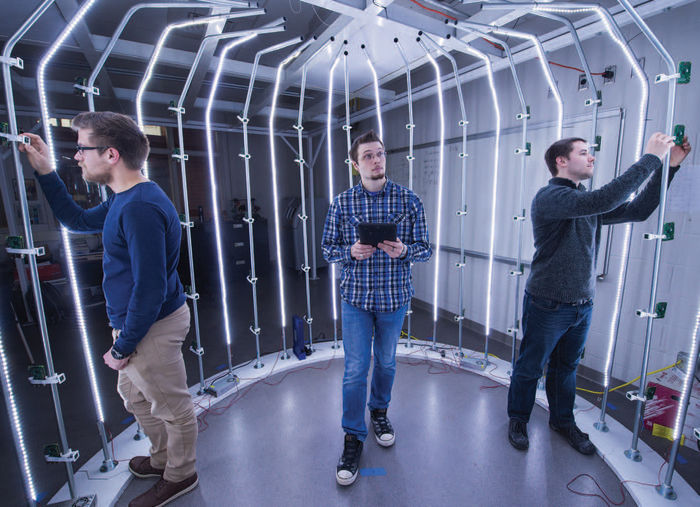 A team of students in the School of Engineering have built a large-scale 3D scanner capable of scanning people and other large objects. The team—Electrical Computer Engineering Technology majors Josh Gloeckner, John Nowakowski, and Trevor Hajec; Electrical Engineering major Michael Paul, and Wes Hall, now an Interdisciplinary Business with Engineering Studies graduate—crafted a modular, circular scanner under the supervision of Jason Williams, assistant teaching professor of engineering, who obtained grant funds for the project.

“We based our design on a similar human-size scanner called Pi3DScan, but we designed ours to be more universal,” Nowakowski said. “We made our base circular and modular, which will allow us to expand the size of it in the future.

The structure includes ninety Raspberry Pi 3 Model B computers and cameras equally spaced around the circle. Lighting is controlled through the use of paper diffusers, which can be adjusted for brightness.

“The most challenging part of the project was the programming and the networking for each of the Pi computers because they all have to work together,” Nowakowski said.

The images captured are imported into a computer program where they are stitched together to form a 3D model that can then be exported to a 3D printer. The project took a little over a year to complete from concept to operational product.

“We’ve scanned people and different objects in the lab with mixed success as the difference in texture and color can affect the quality of the scans,” Nowakowski said.

Engineering students in the Materials and Manufacturing Group (MMG) took part in a special networking session earlier this year. Group members shared their résumés and discussed potential internships and job openings with representatives from ten different companies. Interactions such as these often lead not only to student work experiences, but also help students explore career paths and practice their interviewing and networking skills. Among the companies in attendance: U.S. Steel, Arcelor- Mittal, McInnes Rolled Rings, TimkenSteel, EG Industries, and Steel Dynamics Inc.

Behrend Ranks Among the Top

New rankings by U.S. News & World Report place the School of Engineering among the top undergraduate programs in the nation. According to U.S. News ranking methodology, the school is at No. 29 on the 2018 list, the highest ranking yet.

“This ranking is a reflection of our excellent students and alumni, who are highly sought after by employers and graduate schools,” said Ed Evans, interim director of the school. “It’s also an endorsement of our rigorous, design-oriented academic programs and our commitment to research, outreach, and continuous improvement in an open-laboratory environment.” 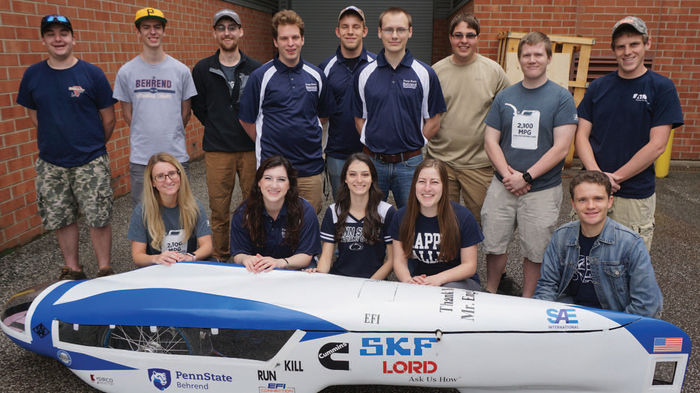 Powered by a new injection-fuel engine, Penn State Behrend’s Society of Automotive Engineers Club team finished second in the annual Supermileage Challenge competition, held last summer at Eaton Corporation’s Marshall Proving Grounds track in Michigan. The competition challenges teams to create vehicles that squeeze the most mileage out of a gallon of gas. The team’s vehicle recorded a fuel efficiency of 2,418 miles on one gallon of gas.

Gamers Go the Distance For a Good Cause

In November, members of the Game Developers Club, along with other Penn State Behrend students, participated in Extra Life, an international one-day gaming marathon that has raised more than $30 million for the Children’s Miracle Network since 2008. In an effort to maximize fundraising, the Behrend club extended its marathon to 48 hours, beginning at 5:00 p.m. on a Friday and continuing through Sunday. The club raised more than $850, which will support Erie-based Saint Vincent Hospital and its pediatric intensive care unit.

Students in two plastics courses now have access to Moldex3D, an industry-leading plastics flow simulation program, thanks to a new software gift valued at $1.2 million. The software was donated by Moldex3D, in part because of the reputation of the School of Engineering’s plastics engineering technology program, one of only six accredited programs in the United States. The school’s plastics processing laboratory is the largest undergraduate educational facility of its type in the country.

“Moldex3D sought us out because our plastics engineering technology program is so actively involved in the industry,” said Jason Williams ’92, ’12 M.P.M., assistant teaching professor of engineering who helped procure the gift. “As a program, we really do have a global presence, and I think this gift confirms that.”

Students are already using the software as part of the PLET 350: Design of Plastic Parts and PLET 481: Plastic Product Development courses. Students also have access to Autodesk animation and modeling tools through an earlier software gift.

Through an innovative new funding process, Penn State is investing $2 million in strategic priorities, while simultaneously advancing the vital and transformative work of its faculty, staff, and students across the University.

Ten seed grants have been awarded to pilot programs that support Penn State’s 2016-2020 Strategic Plan and its thematic priorities of transforming education, enhancing health, stewarding our planet’s resources, advancing the arts and humanities, and driving digital innovation. The funded projects range from the collection, security, and management of big health data; to the global development of energy-efficient buildings; to nurturing employment pathways and expanding sustainable and socially responsible food production in Pennsylvania.

Faculty, staff, and students from across the University submitted proposals for consideration, seeking grants ranging from $50,000 to $250,000. The first cohort of funded initiatives received awards totaling approximately $2 million.

Penn State Behrend was awarded $250,000 in funding for the proposal: Energy University Partnership to Support the Commonwealth’s Oil and Gas Strategy, which is focused on research, development, byproduct utilization, and educated workforce needs in support of the new Shell Pennsylvania Chemical’s ethane-to-ethylene cracker plant near Penn State Beaver. The initiative supports the strategic thematic priority of stewarding our planet’s resources.

The initiative will establish Penn State Behrend as the central point in the Erie region and statewide for byproduct utilization outreach efforts. 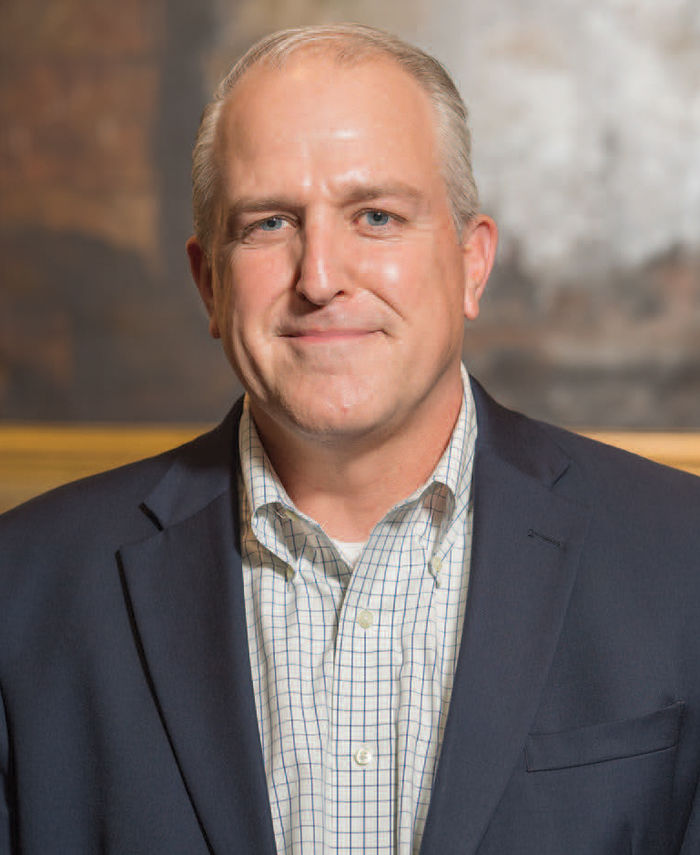 Brian M. Kupchella, a 1990 Plastics Engineering Technology graduate, was recently honored with the lifelong title of Alumni Fellow, the highest award given by the Penn State Alumni Association.

Kupchella is president, CEO and chairman of Truck-Lite, a market leader in truck and trailer safety lighting that has introduced more than 250 innovations to the transportation industry. He began his career with Truck-Lite in 1990 and was responsible for its transition from automotive to commercial vehicle lighting products. He has held a variety of positions within the company, including manager of product engineering, chief operating officer, and vice president of business development with responsibility for effective market and product analysis and direction of all internal resources to support new business opportunities. Kupchella led Truck-Lite’s development of LED technology for commercial and military applications, including the first full LED headlamp system in the transportation industry.