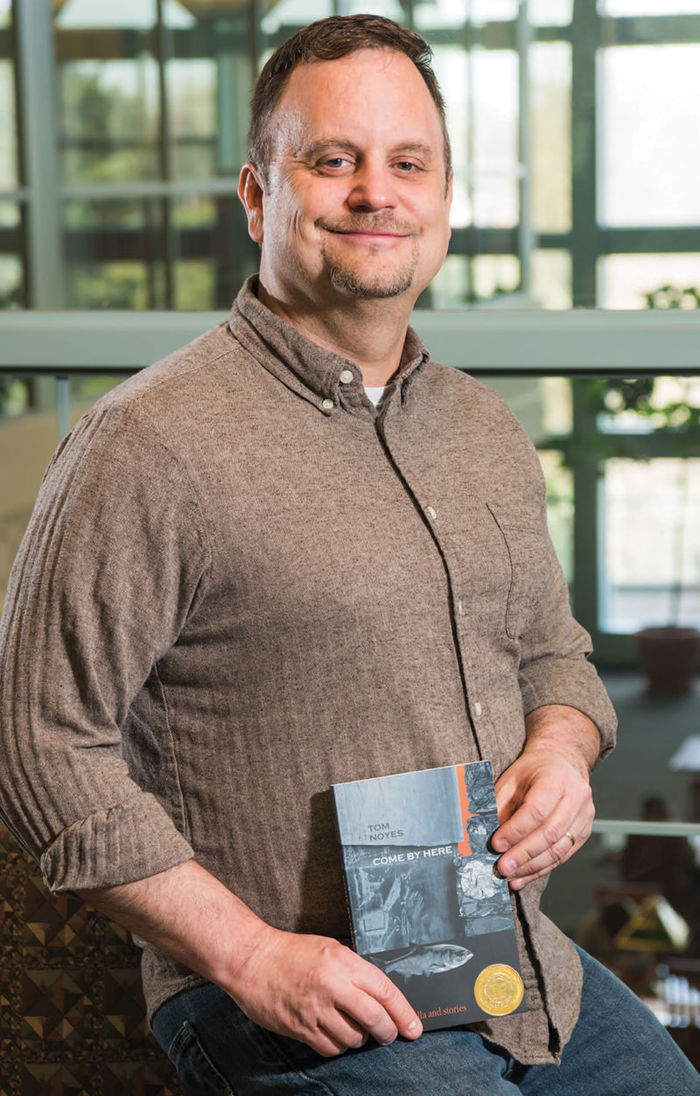 Writer’s block? “It’s not what most people think,” said Dr. Tom Noyes, professor of English and creative writing at Penn State Behrend. Noyes would know. He not only teaches writing but also is the author of three published short story collections and is working on his first novel.

“Writer’s block is just a fear of writing badly,” he said. “If you can get over that fear and get comfortable with the fact that you’re going to write a lot of stuff that needs to be thrown away, then you can start doing the messy work that is writing.”

In other words, just start typing. Once the words tumble out, you’ll find your rhythm or a thread to follow. And, there you go, blockage cleared.

Case in point: Noyes’ method just worked here. Writing a feature story about a creative writing professor is a daunting task. His advice ended a day of thinking, stalling, and setting this piece aside. Just start.

Like most authors, Noyes fell in love with the written word early, devouring Hardy Boys and Encyclopedia Brown mysteries in his youth. Soon, he was penning his own stories.

“Reading feeds writing,” he said. “Once you start writing, you read like a writer and you start paying attention to language, plot, and what the author chose to leave in, or out, of the story.”

Noyes must have taken great notes. His work has garnered praise in such forums as The New York Times Book Review and Kirkus Reviews, and has been recognized with several awards. His latest book, Come by Here: A Novella and Stories, won the 2013 Autumn House Fiction prize, beating out 1,300 other submissions for top honors.

Meanwhile, he has taught full time in Behrend’s Creative Writing B.F.A. program for eleven years where he also is a consulting editor for Lake Effect, the college’s national literary journal. He said he enjoys the opportunity to discuss his craft and guide new writers.

“The people who helped me most in my life were teachers,” he said. “Also, writing is a very solitary thing, and I wanted a more social job.”

How does one teach creativity? Noyes said it’s a matter of drawing it out.

“People are creative by nature,” he said. “They just need to discover that and let it out. There are no bad writers, just beginning writers.”

Noyes’ number one goal is helping students develop their own voice.

“If you don’t have command of your own voice, you start sounding like other writers,” he said. “You need to find your own voice and have confidence in it.”

Noyes built his confidence writing short stories. “There’s a lot of satisfaction in finishing something fairly quickly,” he said.

Short stories also offer the opportunity for Noyes to explore the topics that most interest him—family and the nature-versus-nurture debate; environmental issues and the impact of humans on the planet; and religion and the healthy and unhealthy ways it’s used—and roll them into published collections.

Now, however, Noyes is deep into his first novel, a work of historical fiction based on the life of a distant relative, John Humphrey Noyes, who founded a 19th-century commune.

Noyes said he’s not exactly sure where the book is going yet, but that’s intentional. “Right now, I’m just filling pages with scenes,” he said. “I don’t outline everything in advance because I like to surprise myself with what happens next. That’s part of the pleasure of writing for me.”

We’re sure it will be part of the joy in reading it, too.