Living in the Limelight 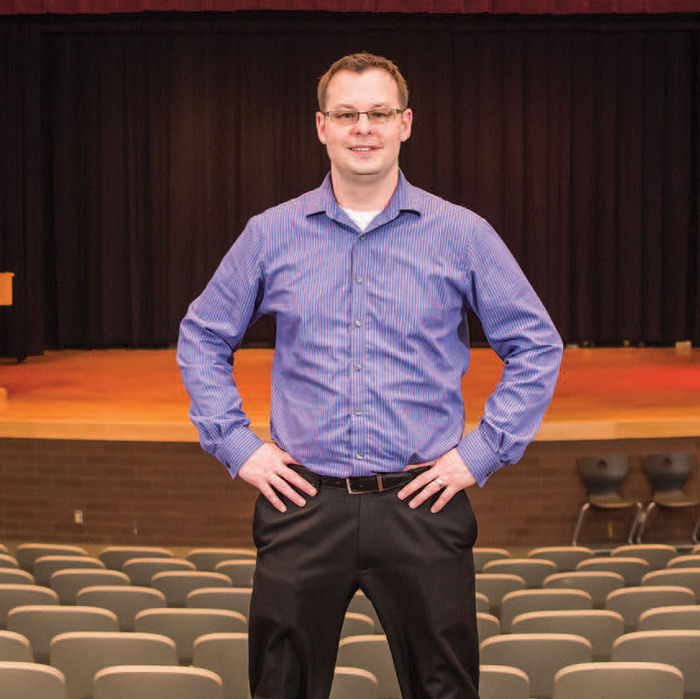 History alumnus brings culture to life, on stage and in the classroom

Steven O’Donnell ’05 produced and starred in his first musical—a homemade version of Phantom of the Opera that he and his sister staged at their church—when he was just 13.

“Somehow we convinced them to let us do it,” O’Donnell said. “I was the Phantom and my sister was Christine. It was pretty low-budget. We strung Christmas lights on the altar. We didn’t know anything about production rights, so it was completely illegal.”

It was also a hit. “We sold out the first night, so we added another show the next night.”

Twenty years later, O’Donnell is still selling out shows. He recently directed a fully-licensed and decidedly more up-scale performance of Phantom of the Opera at Seneca High School in Erie County. All three performances sold out in advance, no doubt due to Seneca’s reputation for first-rate stage shows directed by the History graduate.

Best of both worlds

O’Donnell is a teacher at the school. He’s been introducing tenth graders at Seneca to world cultures for eight years. The job came with a side gig.

“They were looking for someone to be a stage manager for the school’s performances,” he said, “and, of course, I loved theatre and had acting and directing experience.”

Though he had a lucrative career in retail management at the time, O’Donnell could not pass up the offer to combine his two loves—history and theatre—into one career.

“I joke about this, but it’s entirely true that I took a pay cut to be a teacher,” he said. “It was worth it, though.”

All the world's a stage

O’Donnell said his theatrical skills come in handy in the classroom.

“It becomes a performance space, in a way,” he said. “I’ve had to change the way I teach because kids today need to be entertained to stay with you. I try to bring the lessons to life and help them understand their part in the larger world.”

O’Donnell acted in community theatre as a teen and participated in every stage production at the Studio Theatre while he was at Behrend. He met his wife, Julie Kosin O’Donnell ’05, a fellow theatre lover, during an audition on campus. Today, they have two daughters, ages 2 and 6, and Julie is a high school math teacher at Seneca. She serves as the choreographer for the shows that O’Donnell directs.

His first show at Seneca was The Wizard of Oz. It was a success, as were subsequent productions, such as Annie, Beauty and the Beast, and Peter Pan.

Putting on a high-quality show is no small task. The O’Donnells, along with an assistant director and choral director, begin casting and working on the musicals three months in advance.

“Every year, Julie and I have that conversation about whether the commitment outweighs the benefits,” he said. “I’m pretty much gone a month prior to the show, except for Sundays.”

That question—“do we or don’t we do this next year”—is answered at the opening-night cast meetings, real heart-to-hearts in which tears readily flow.

“For three months, we gave those kids a place to come where they felt valued, listened to, and loved,” he said. “I get that, because it’s what theatre did for me.”

Each summer, O’Donnell teaches the fundamentals of acting to children through Penn State Behrend’s College for Kids program. It’s a popular class among young thespians.