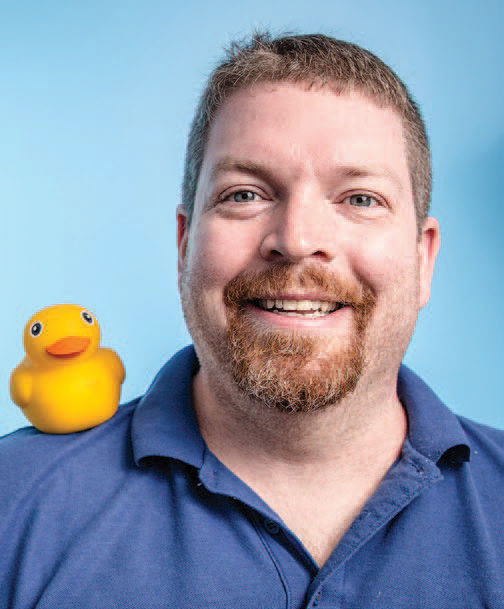 Matt MacBeth ’96, CEO of pi lab, is the co-creator of Edwin the Duck

Though their childhood years of bubble baths and bedtime stories are behind them, eight Penn State Behrend students spent the spring semester playing with a rubber duck named Edwin.

The students, all members of Dr. Arpan Yagnik’s COMM 421 Advertising Creative Strategy class, were tasked with getting to know the product and designing three advertisements touting the modern-day waterfowl’s benefits to parents and their children.

Edwin is no ordinary duck. He is a 21st century duck, a “smart” bird that can float, play music, act as a nightlight, and, with the aid of mobile apps, play games with children and engage them in animated learning adventures.

Edwin has a Behrend connection—he was co-created by School of Engineering alumnus, Matt MacBeth ’96, CEO of pi lab, a children’s entertainment company based in Carmel, Indiana. “I thought the project was a great opportunity to give the students some experience working on an actual product for a real company,” said MacBeth, who jumped on board when Yagnik reached out to him to ask if the students could create advertisements for Edwin.

The students worked on their ads individually, an approach that Marissa Knox, a senior Communication major, said put her creative skills to the test.

“We do a lot of group projects, but the Edwin assignment was just me,” Knox said. “Working for a real client and doing it all by myself made this project a really valuable learning experience for me.”

Of course, Knox wasn’t really alone. She had Yagnik and classmates who offered suggestions and constructive criticism to help her polish and perfect her advertisements.

Paddling in a new pond

“All of their educational lives, they have been trained to use the analytical side of their brain and to find the right answer, but there is no right path or correct answer when you’re doing creative work,” Yagnik said. “They want me to tell them exactly what I want, but that’s like asking me which roads to take to get to a certain destination. It doesn’t matter which way you go; I just want you to get there.”

Mike Callan, a May Communication graduate, said he learned that creativity takes a lot of thought, many revisions, and thick skin. “I definitely learned to take constructive criticism and to not get too attached to my work,” Callan said.

At the end of the semester, students formally presented final advertisements to MacBeth and several college administrators. MacBeth chose three ads or concepts that pi lab may be able to use with some tweaking. Students whose ads were chosen for further development got to keep the golden goose, er, yellow bird … lucky ducks.

How Edwin was hatched

Matt MacBeth ’96, CEO of pi lab, is the co-creator of Edwin the Duck. MacBeth, an Electrical Engineering graduate, had been designing application and Internet-connected products for a number of industries when he and his business partner, Don Inmon, decided to spread their own wings. They launched a Kickstarter campaign to create Edwin, a waterproof smart duck that can play music, test water temperature, act as a nightlight, and take children on interactive adventures with the aid of mobile applications. You can buy Edwin, priced at $99, at Best Buy stores, at Apple retail stores in North America and Europe, and online.