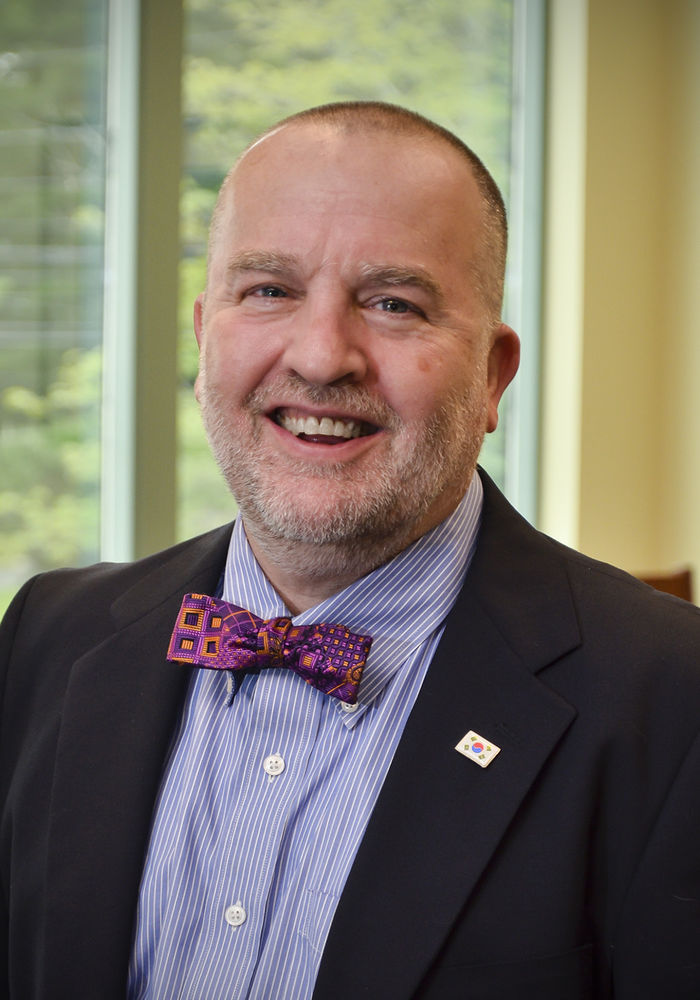 Eric W. Corty has been appointed director of the School of Humanities and Social Sciences at Penn State Behrend. He has taught in the school since 1993.

This spring, Dr. Eric W. Corty was appointed director of the School of Humanities and Social Sciences. He brings to the position more than three decades of experience in teaching, research, outreach, and academic leadership.

Corty, a professor of psychology at Penn State Behrend since 1993, had served as interim director of the school since 2015. Prior to that, he was associate director. While he’s a familiar face on campus, H&SS News wanted to dig a little deeper so you could get to know the guy behind the bow tie.

Why did you want to be the director of the school? I like helping people. I want to give our faculty the resources they need to do their jobs and as much support as I can provide for research, scholarship, creative activity, and teaching. And I want to shape the direction of the school. We are the home of liberal arts at Behrend, and we should fly that flag high and proud.

What are the initiatives you want to focus on first? One is upgrading the TV studio. I hope we’ll be transmitting regular newscasts next year. Another is giving art a more prominent role on campus. We’ve recently installed two large pieces in Kochel. Heather Cole, lecturer in digital arts, created a 20- by 8-foot augmented reality mural called Don’t Give Up the Ship, and we also have a piece by business student Sean Wither, who created a flag out of empty energy drink cans. (And he really drank all of them himself!)

What do you want people to know about the School of H&SS? Our programs lead to great opportunities and meaningful careers. While you won’t find many job postings titled “English majors wanted,” the skills learned as an English major are applicable in many careers. See pages 8-9 for examples from our own alumni.

Why are the humanities and social sciences important today? Because these disciplines are about understanding human beings and telling their stories. This is just as vital today as it was when our ancestors sat around a fire and listened to poets and storytellers. The humanities and social sciences teach us how to take in and communicate information, increase respect for diversity, and improve our understanding of others. If that is not vital, I don’t know what is.

You’re very open about the fact that you have Parkinson’s disease. When did you first learn you had it? In 2011, my voice had become quieter and I was having trouble typing. Those are two things that a college professor doesn’t need! It turned out to be Parkinson’s, and I made the decision early on to be very upfront about it. I make use of as much technology as I can like dictation software to type and a microphone when I need one.

What would people be surprised to know about you? I used to have a ponytail and routinely wore cowboy boots.

Advice for incoming students? Get connected! Join a club or organization and get involved. Also, choose a minor in a school other than the one that houses your major.

Pets: Two cats and the shredded furniture to prove it.

Behrend beginning: I came here on a one-year appointment in 1993. The person I filled in for that year didn’t come back, and they offered me his job. I’ve been here ever since.

In his ear: I listen to podcasts and really enjoy RadioLab. If you have never listened, try one of these episodes: “Fu-Go,” “The Buried Bodies Case,” or “Eye in the Sky.”

Guilty pleasure: Just one? Then it has to be a Panera Bread cinnamon crunch bagel: warm, crusty, doughy deliciousness!