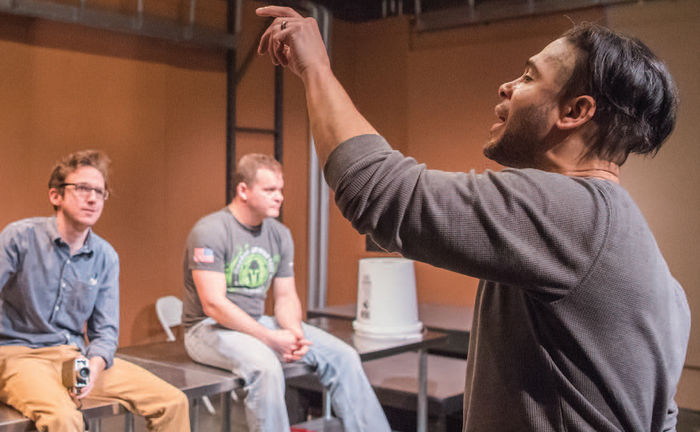 Wilson Jermaine Heredia speaks to the cast of Rent.

Students cast in the college’s spring production of Rent had the opportunity to learn from a pro when Wilson Jermaine Heredia, above right, the actor who portrayed Angel in the show’s original Broadway run, taught a master class in the Studio Theatre in March. After working with students in the afternoon, Heredia and Behrend’s Rent cast members gave a free concert, performing selections from the Tony Award-winning rock musical and other works.

Dr. John Champagne, professor of English, has been selected as the Penn State Laureate for 2018-19. He was chosen by University President Eric Barron and Executive Vice President and Provost Nick Jones on the recommendation of the laureate review committee.

Champagne has been teaching courses in English, literature, communication, philosophy, and the arts at Behrend for twenty-five years. He has been published extensively in both scholarly and creative venues; has received numerous awards for teaching, research, and writing, and has served on a range of committees and initiatives at the program, school, and college levels.

The Penn State laureate is an annual faculty honor established to bring greater visibility to the arts, the humanities, and the University, as well as the laureate’s work. The laureate appears at Penn State campuses and other events throughout a year-long appointment.

Pyschology majors Tiffany Eichler and Donald Fromknecht were among a group of Penn State Behrend students and faculty advisers who attended the Game Developers Conference (GDC) in San Francisco in March. Eichler and Fromknecht are pursuing the degree’s Human Factors option, which focuses on user interface and user experience.

“Students are exposed to the game industry from the inside, get a chance to talk to professionals, and make connections that are invaluable as they set course for their own career in the game industry,” said Dr. Heather Lum, assistant professor of psychology.

“I met a user experience analyst, which is my chosen field, from my favorite gaming company, Blizzard,” said Eichler, a senior.

“We have been emailing since the conference, and I have learned a lot about the industry and why psychology has a place in it. He shared with me the 4best time to apply for an internship with Blizzard, so I am biding my time until I can get my name in there.”