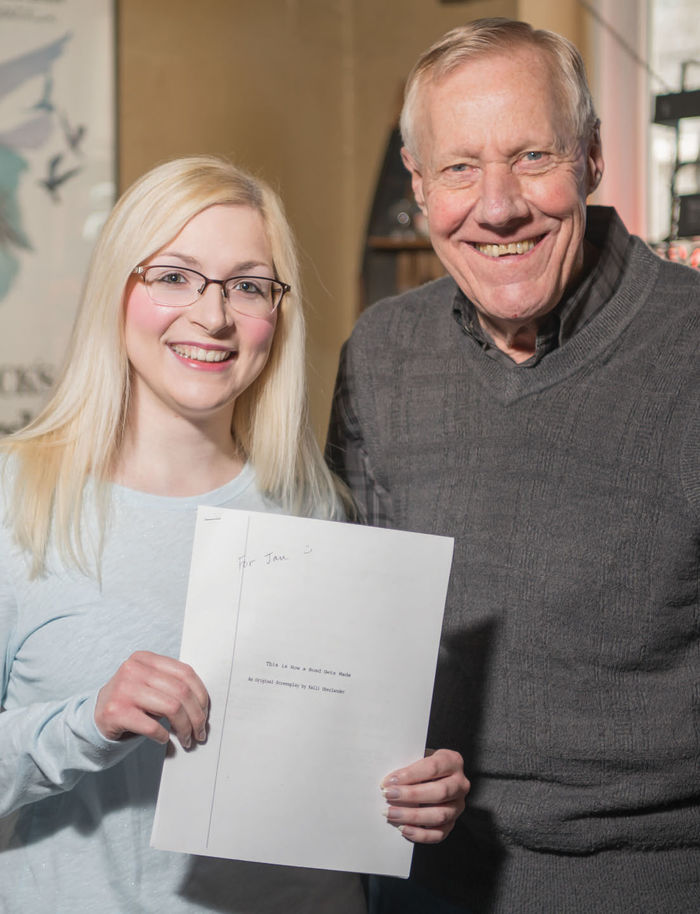 All the world is a screenplay to Kalli Oberlander ’15, a creative writing graduate, author, and screenwriter.

“I see stories as screenplays first,” Oberlander said. “Screenplays are all about the dialog, and showing, not telling. It’s just how my brain works.”

Her senior thesis was a screenplay, the first in the history of the creative writing program at Penn State Behrend. It was also a novel.

“I wrote the screenplay first, then I rewrote the whole thing as a novel,” she said.

She recently self-published that novel—Sea Oddity—as an e-book on Amazon. Oberlander said the story was inspired by the music of David Bowie. The protagonist’s name is Major Tom, a former NASA astronaut turned methamphetamine user.

Oberlander has help from an unlikely source: Penn State alumnus Jan Beal ’69. Beal, who owns C.W. Beal Painting in Erie, is an aspiring screenwriter who turned to Oberlander for help editing a screenplay he wrote in longhand on yellow legal pads.

“I’m not a professional writer and I don’t know anything about screenwriting, so I called Penn State Behrend to see if anyone in the English or creative writing departments could help me edit my screenplay,” Beal said. “The professor who I talked to said he had a standout student named Kalli who specialized in screenwriting and might be willing to take on some side work.”

The 60-plus-year-old business owner and the creative 20-something student began meeting weekly. Oberlander helped Beal trim and tweak his screenplay to industry standards, and Beal began encouraging and mentoring Oberlander.

In a movie-plot-like twist, what started as a freelance gig for Oberlander soon became a close father-daughter-like friendship that continues today.

“I lost my father when I was eleven,” Oberlander said, “So Jan has become a father figure to me.”

The two, along with Beal’s wife, are planning a trip to Los Angeles in the near future to advance their projects.

“First thing we need to do is find Kalli an agent,” Beal said. “Hollywood isn’t looking for a 68-year-old one-hit wonder, but they are looking for talented writers and that’s exactly what she is.”

“It’s my intention to promote her and slide in on her coattails,” Beal said.

Oberlander has already found success in the Erie area. She’s written four short films, including Lucky Strike and This Year’s Scream Queen, two horror comedies, and This is How a Road Gets Made, a film about a young girl and her brother struggling to fit in as they cope with the horrors of their past.

“Erie has a small community of film artists, but they are very supportive,” she said. Oberlander has starred in two of her films for fun. “I really enjoy acting when I feel as though I understand the character.”

Apparently, she is convincing.

“I’ve had people see the movies I’ve acted in and ask, ‘Have you ever sought therapy?’ and I want to say ‘It’s a character!’” she said. “My art is an extension of myself, but it’s not me. The work I do is not autobiographical.”