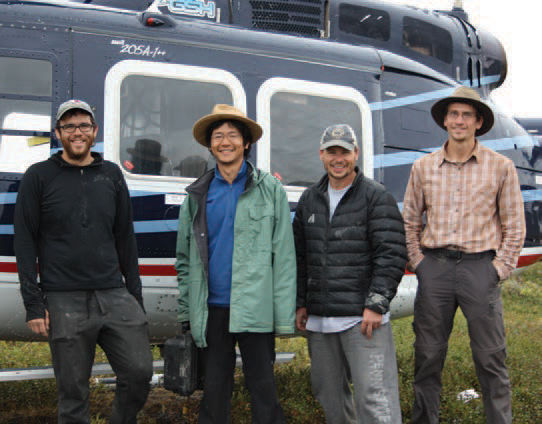 One hundred million years ago, during the late half of the Cretaceous period, when global temperatures were considerably warmer and the Arctic was largely ice-free, plate tectonic activity formed a large inland sea known as the Western Interior Seaway.

This vast body of water, extending from the present-day Arctic Ocean to the Gulf of Mexico, divided North America into two landmasses. Montana, Wyoming, North and South Dakota, Nebraska, Kansas, Colorado, New Mexico, and Texas all were underwater and teeming with aquatic life, as were the Canadian provinces of Alberta and Saskatchewan and the Northwest Territories.

Today, of course, there is no interior sea. In the last century, scientists have extensively studied the former seaway’s southern areas, which are known to be fossil hotbeds, but its northern counterparts in the Northwest Territories of Canada are so inaccessible that they’ve been largely untouched.

This summer, Dr. Todd Cook, assistant professor of biology at Penn State Behrend, was part of an international team of explorers to prospect for fossils in one such site, located about 150 miles northeast of Inuvik, Canada.

“Very little is known about the northern region of the seaway given its remote location,” Cook said. “In the 1960s, a research team recovered a number of fossils from this area, but no one had returned since.”

The expedition, primarily funded by the National Geographic Society’s Committee for Research and Exploration and by the Polar Continental Shelf Program, was so remote that the members of the team and all of their supplies had to be helicoptered into their campsite. They lived in complete isolation from modern amenities for three weeks as they searched for fossils in the exposed rock, estimated to be about eighty million years old, along the east bank, or Windy Bend, of the Anderson River.

Cook and his fellow explorers—Dr. Matthew J. Vavrek from the Royal Ontario Museum, Dr. Takuya Konishi from the Exploring Ancient Sea Life in Arctic Canada Professor participates in international research expedition funded in part by the National Geographic Society University of Cincinnati, and James Campbell, a doctoral student from the University of Calgary—set up camp on a plateau near the river in late July.

“We didn’t know what we’d find or if we’d even find anything,” Cook said.

On the very first morning, the team trekked down to one of the rocky valleys along the river and found multiple fossils.

“When we found that many that fast, we knew it was going to be a very successful trip,” Cook said.

The team worked for three weeks, often for ten to twelve hours a day. When fragile fossils were discovered, they painstakingly extracted the specimens from the rock and “jacketed” them with gypsum to transport them safely.

“We found a lot of fossils from bony fish, including some significantly large fish, as well as ancient marine reptiles and birds,” he said. “It was pretty amazing collecting the remains from eight-million-year-old marine life. We were happy anytime we found bone.”

And they had plenty to be happy about. Cook said they loaded 400 to 500 pounds of rock onto the helicopter for their return flight in August.

The team’s findings were shipped to the University of Alberta where professional preparers will extract and clean the fossils. Once prepared, many of the fish specimens will then be sent to Cook at Penn State Behrend for study.

Cook said the significance of the team’s research is threefold: It sheds light on late Cretaceous vertebrate diversity in a poorly-known region of the Western Interior Seaway; it helps reconstruct the regional paleoecology and paleoenvironment; and it may offer a glimpse of the future response of vertebrate animals to a warming planet.

“We may be able to use this assemblage of marine vertebrates as an analog to predict the response of modern marine life to changes in climate and the melting Arctic ice,” he said, perhaps to counter the old adage that those who

On dining in the wild: “We ate pretty well. On the last night, we had penne and smoked salmon.”

On roughing it: “After three weeks, you really crave a shower.”

On losing fifteen pounds: “Traversing those valleys day after day was quite a workout.”

On wildlife encounters: “We saw caribou, but thankfully never came across any grizzly bears.”

On a scale of one to ten: “The trip was definitely a ten.” On returning to the site: “We were blown away by the amount of fish material we found. Of course, we’d love to go back and get more.”

On publishing their findings: “We have lots of writing to do.”