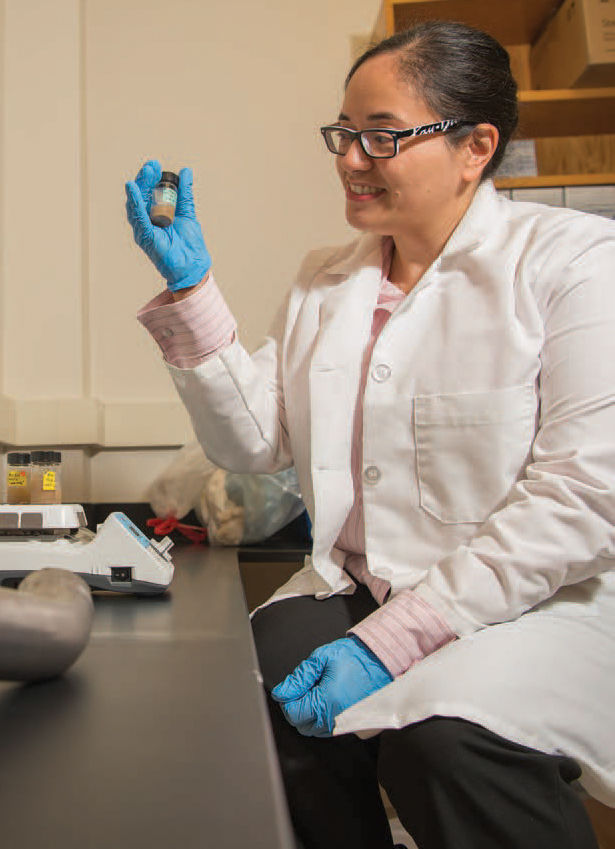 Dr. Deborah Aruguete is studying the effect nanoparticles released by automobile catalytic converters have on the environment.

Dr. Deborah Aruguete had a high-level position managing a research grant program at the National Science Foundation, which supports fundamental research and education in science and engineering, when a life crisis changed her career path.

“When you experience something like that, you think about what you’ve done with your life and what you still want to do with it,” she said.

The environmental geochemist thought about the most rewarding achievements in her life. At the top of her list was the success of the students she had mentored throughout her scientific career.

Aruguete was also eager to get back into the research lab and delve into the nitty-gritty details of science.

“At NSF, I was seeing exciting research proposals come across my desk all the time,” she said. “I wanted to return to being the person coming up with those ideas. “

Enter academia, the perfect marriage of teaching and research for Aruguete, who is now an assistant professor of environmental science at Penn State Behrend.

Don’t let the title fool you: She’s no radical conservationist.

“When people hear ‘environmental scientist,’ they tend to politicize it and dismiss us as tree-huggers and activists, but it’s a pragmatic science,” she said. “We are trying to learn the facts about what’s happening in the environment without a political agenda. We understand that humans have needs and expansion will happen. Solid data on environmental processes can better inform how we manage those needs.”

Focus on the little things

To that end, Aruguete has been thinking small—very small—and studying the effects nanoparticles released by automobile catalytic converters (ACCs) have on the environment.

“ACCs convert raw exhaust from an engine into much less harmful gases,” Aruguete explained. “They can do this because they contain the metals platinum, palladium, and rhodium. ACC materials are very brittle, so when you drive around, tiny little pieces of these ACCs are flying out onto the sides of the road and into the air.”

Though the metals being released are nanoparticles (for size reference, a human hair is approximately 80,000- 100,000 nanometers wide), there is an abundance of them in the environment. A 2015 estimate indicated that up to six tons of platinum is emitted worldwide each year.

Most importantly, Aruguete said, is that nanoparticles can behave very differently from bigger pieces of the material, so while platinum, palladium, and rhodium in their larger form are noble metals that are not reactive under standard environmental conditions, that cannot be assumed in nanoparticle form.

“When materials get really tiny, they can act in seriously unpredictable ways,” she said. “We have no idea what they will do. By that I mean, what chemical reactions might they have when they get into the soil or air or Lake Erie?”

The problem is that if these nanoparticles dissolve, they could release a different, biologically-active form of themselves. Some of these forms are actually used as powerful chemotherapy drugs.

“ACC material being spewed out of our cars daily could potentially release chemotherapy drugs into nature,” she said.

While chemotherapy drugs are great for those fighting cancer, scientists don’t know what effect they may have on bugs, plants, bacteria, fish, and other organisms.

Aruguete is hoping to find answers. In her lab, she grinds up catalytic converters and subjects the particles to environmentally-relevant water conditions to see how they react.

Aruguete’s research also could one day be used to develop a technology to recover precious metals.

“These are commercially valuable precious metals that are being released,” she said. “If someone can find a way to extract these metals from the soot or roadside dust, it could be very profitable.”

Aruguete is particularly interested in extracting precious metals from sewage sludge, the somewhat-solid remains that are left after treating wastewater. There is growing interest in mining sewage for precious metals.

“Right now, Erie incinerates its sewage sludge, then puts it into a landfill,” she said. “Wouldn’t