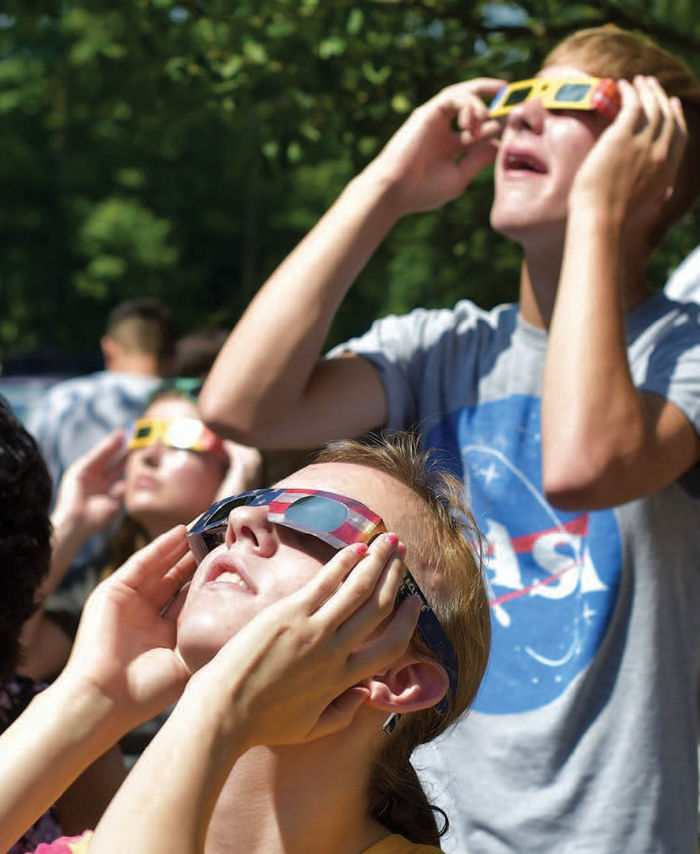 Students of all ages, as well as faculty, staff, and community members, peered through the college’s telescopes, cardboard solar eclipse glasses, and paper-and-tin-foil pinhole viewers to see the moon steal the sun’s spotlight.

All eyes were on the sun on August 21, when the Great American Eclipse passed over Penn State Behrend. While it was only a partial eclipse in the Erie area, it was still a major astronomical event, and the college invited the community to join in viewing it.

Hundreds of students of all ages, as well as faculty, staff, and community members, peered through the college’s telescopes, cardboard solar eclipse glasses, and paper-and-tin-foil pinhole viewers to see the moon steal the sun’s spotlight.

They’ll get an even better look on April 8, 2024, when Erie will be in the path of totality of the next solar eclipse, leaving the area in complete darkness for a brief period of time.

P.S. Alumni: Might be a great time to plan a homecoming to your alma mater!

Speaking for the Trees

Penn State Behrend has earned Tree Campus USA recognition for the fourth consecutive year. It is one of just sixteen colleges and universities in Pennsylvania to be recognized.

Tree Campus USA, a national program launched in 2008 by the Arbor Day Foundation and Toyota, honors colleges and universities, and their leaders for promoting a healthy environment for trees and engaging students and staff in the spirit of conservation. To obtain Tree Campus recognition, the college met the program’s five core standards for sustainable campus forestry.

“Because of our Tree Campus designation, many trees have been obtained through the state’s TreeVitalize grants received over the past five years,” said Ann Quinn, researcher and director of Greener Behrend, an outreach effort of the college’s School of Science. “Trees are aesthetically beautiful and also important to air, soil, and water quality. The Penn State Behrend Arboretum and the Tree Campus designation are good examples of the living lab concept in practice at Behrend.”

Each year, the local chapter of Sigma Xi, a scientific research society to which several School of Science faculty members belong, hosts a series of informal get-togethers designed to “bring scientists and community members together to explore scientific topics in a public, accessible, and relaxed venue.”

Each Science Café features a short, informal presentation by a local scientist followed by conversation on scientific topics of broad interest. Presentations are open to the public and geared to a general audience.