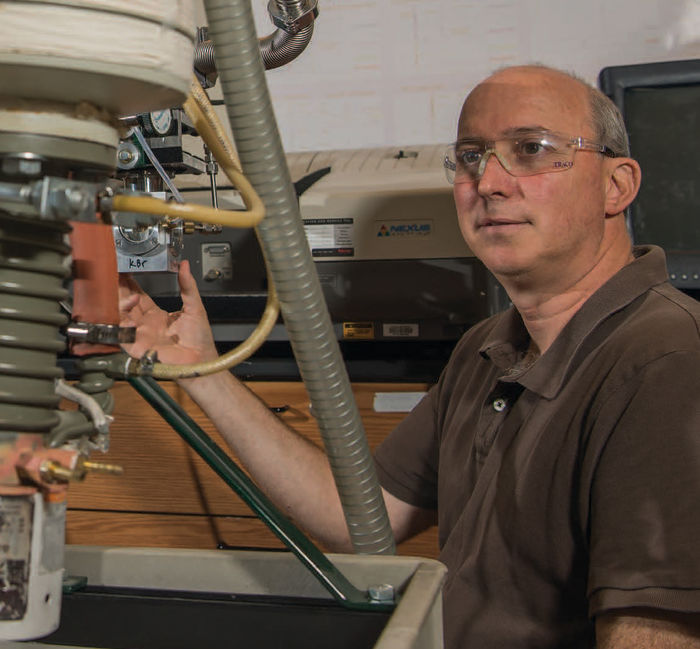 The more one understands how things work, the better one can control or predict outcomes. This is true in the trajectory of a bouncing soccer ball, the effect of gravity on an apple, or the results of your calculus test.

Some processes, like the examples above, are easily observed. Others, such as what happens in a chemical reaction, are nearly impossible to capture and examine. While scientists can easily study the beginning and end of a chemical reaction, what transpires in the middle—when bonds are breaking and free radicals are racing around looking for new mates—is often unknown.

Mysteries don’t sit well with scientists. They’re driven to learn the how and why. Shedding light on exactly what happens when two gases meet is something that Dr. Jay Amicangelo, associate professor of chemistry, has been exploring for years.

“My overall research interest is studying transient chemical species,” he said. “But it’s not easy because they’re not stable under normal room temperature and atmospheric pressure conditions. So I use a technique known as matrix isolation infrared spectroscopy to obtain spectral evidence of the existence of transient species.”

In non-technical terms: He literally freezes chemical reactions in progress, allowing him to study the steps that occur between point A and point B.

Amicangelo built the matrix isolation apparatus when he began working at Behrend in 2002. The lowest temperature it is capable of reaching is 8 kelvin, which is about -445 degrees Fahrenheit.

“The basic idea behind this technique is that we produce these transient species in a very low-pressure environment and trap them at a very low temperature in solid material,” Amicangelo said. “This allows us to produce and trap these species before they have a chance to decay and to obtain their infrared spectral signatures, which proves their existence and allows us to determine their three-dimensional molecular structure.”

At Behrend, Amicangelo primarily uses argon or nitrogen as the matrix materials, but he recently had a chance to use a special form of hydrogen known as parahydrogen when he did a semester-long sabbatical in Taiwan. He was a guest in the lab of Dr. Yuan-Pern Lee at the National Chiao Tung University. Amicangelo and Lee met at a conference several years ago, and this is the second time Amicangelo has done research work in Lee’s lab.

“Para-hydrogen makes the experiment more effective and opens up a whole new area of radicals that are difficult to study with my set-up at Behrend,” he said. “There are only about seven labs in the world where you can work with para-hydrogen.”

“They only support fundamental research projects that have a connection to petroleum,” he said. “I applied to study radicals that are important to combustion, which is vital in the production of petroleum.”

The funds, spread out over a three-year period, will be used for materials, supplies, summer salaries for undergraduate student research assistants, and a computer on which they can do quantum chemistry calculations.

“The project involves the production of a series of radicals and the formation of weakly interacting complexes,” Amicangelo said. “A complex is a transient system in which two species are not fully chemically bonded together, but are close enough to each other to exert an influence on one another. These kinds of species are also thought of as intermediates in chemical reactions, and evidence of their existence helps support the reaction mechanisms.”

“There have been a few cases where I was the first person to report that a certain molecule exists,” he said. “That’s a lot of fun because much of what researchers do can be monotonous, so when you find something like that, it’s really very cool,” he said.