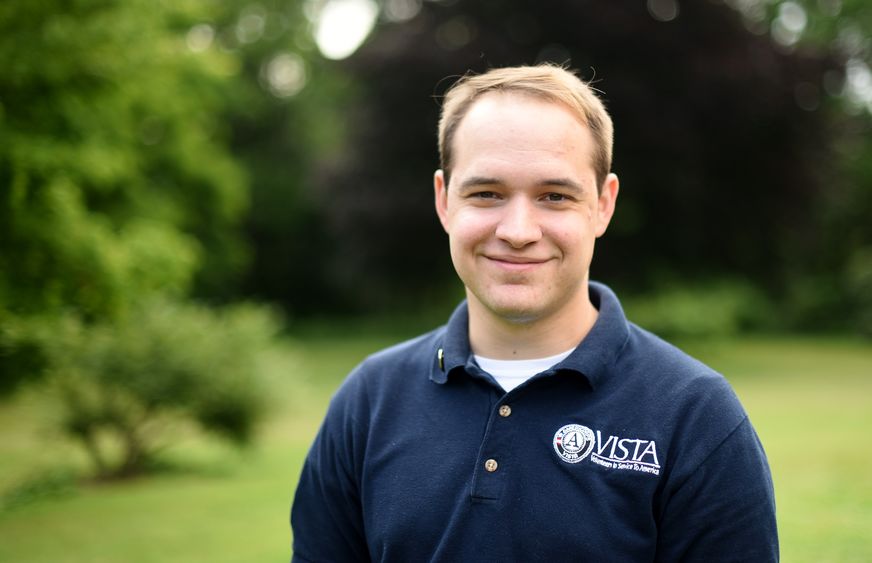 Erie native Will Taylor is the first AmeriCorps VISTA member assigned to Penn State Behrend. He helps manage the campus garden and food pantry and the Waste Not program, which donates food to the Erie City Mission.

One-fifth of all U.S. college students do not have access to fresh, affordable food
June 22, 2018

ERIE, Pa. — More than 40,000 people in Erie County are considered to be “food insecure,” a term used by the U.S. government to describe them as not having reliable access to affordable and nutritious food.

Penn State Erie, The Behrend College, is working to reduce that number — both on campus and in the Erie community — with a three-year AmeriCorps VISTA commitment to develop healthy food programs. The college has created a campus garden and developed other resources to provide fresh, healthy food to students and neighbors in need.

Much of the work has been coordinated by Will Taylor, the college’s first AmeriCorps VISTA (Volunteers in Service to America) member. Taylor, 23, has spent a year on campus, developing food programs and contributing to other service projects. His work will transition to a second VISTA member later this summer.

Chris Fox, the college’s assistant director for civic engagement, and Ann Quinn, director of Greener Behrend, a student group that promotes ecological sustainability within the college community, oversee Taylor’s work. They chose food insecurity as the VISTA project in part because of Quinn’s work in sustainability.

“We needed to increase the capacity of our campus garden and our Waste Not food-donation program to reach further into the Erie community,” Quinn said. “Will brought a great skill set and a lot of knowledge about food insecurity, which is a pervasive problem in our region.”

The VISTA project also built on the college’s 2016 common read, “The Good Food Revolution: Growing Healthy Food, People, and Communities,” by Will Allen. Allen spoke about urban farming during a 2016 visit to Behrend.

“That book really started a movement on campus,” Fox said. “Food insecurity was an issue that people really understood and cared about. Choosing that as the VISTA project was a great way to move that work forward.”

Taylor has led several initiatives designed to reduce food insecurity both on campus and in the Erie community, including:

There is no shortage of students willing to volunteer their time to food insecurity projects, said Taylor, who will begin a graduate program at American University this fall.

“The opportunity to make a positive impact and contribute to societal change is something that students will take with them long after they have graduated from Behrend,” he said. “They learn that success is measured not just by what they themselves achieve but by the impact they can have on others.”

To learn more about AmeriCorps VISTA, or to apply, visit lakeeffectleaders.com.