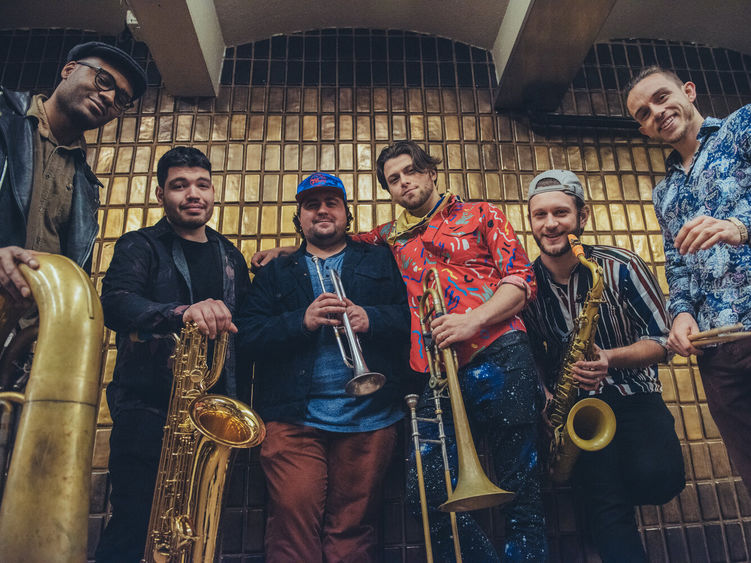 The New York-based brass-funk band Lucky Chops will perform at Penn State Behrend as part of Music at Noon: The Logan Series on Sept. 13.

ERIE, Pa. — The brass-funk band Lucky Chops plays like the teacher just left the room: The six musicians jump and shout, pogo bouncing, pinballing from “Battle Hymn of the Republic” to “Funky Town” to “Eye of the Tiger.”

The band, which formed in 2006 at Fiorello H. LaGuardia High School, found its groove busking on New York City subway platforms. A 2015 video from the West 34th Street station has been viewed more than 7.2 million times.

Lucky Chops will open the 2022-23 season of Music at Noon: The Logan Series at Penn State Behrend with a free concert on Sept. 13. The performance, which begins at noon in McGarvey Commons, is open to the public. Guests are encouraged to bring a lunch.

The Logan Series was designed to make chamber music more accessible to a broader audience. The concerts are informal, and a portion of the seating is reserved for students from Erie’s Diehl Elementary School.

In addition to Lucky Chops, this year’s series will feature the following artists:

Fowlis is an award-winning Gaelic singer from the Outer Hebridean island of North Uist. She has recorded five studio albums and contributed two songs — “Touch the Sky” and “Into the Open Air” — to the 2012 animated film “Brave.” She has performed at the Festival of Voice in Cardiff, Wales, at the Royal Albert Hall in London and at the Glasgow Commonwealth Games, which were broadcast to an audience of more than 1 billion people.

The Boston-based ensemble Cordis performs with custom-made instruments, from an electric mbira to a cylinder-driven music box. The group has performed on National Public Radio, the British Broadcasting Corporation and Public Radio International. This year’s performance at Penn State Behrend will feature the group’s “Condition Blue,” with newly developed water instruments.

The Dublin Guitar Quartet is a classical quartet devoted entirely to new music, which is performed on eight- and 11-string guitars. The group has adapted music by Philip Glass, Steve Reich and Arvo Part.

The Taiwan-based ensemble A Moving Sound blends original music and dance and has been featured on National Public Radio, BBC Radio 3 and the Discovery Channel. The group has performed at the Kennedy Center and at the WOMAD International Arts Festival.

Chromic Duo blends classical music, toy piano, and elements of film and virtual reality as the musicians, Lucy Yao and Dorothy Chan, explore the small wonders of the everyday. The duo has won awards from the Young Classical Artists Trust and the Concert Artists Guild. Their “Listen to Chinatown” is a site-specific augmented-reality experience, a headphone walking tour that incorporates murals, poetry and a meal at a dim sum restaurant.

Music at Noon: The Logan Series was founded by Mrs. Kay Logan in 1989 and receives major support from the Kay Logan Trust. Additional funding is provided by the Penn State Behrend Student Activity Fee. Music at Noon receives funding support through a grant from the Pennsylvania Council on the Arts and the National Endowment for the Arts. Additional support is provided in part from an Erie Arts & Culture grant, made possible by community contributions to the Combined Arts & Cultural Campaign and the Erie Arts Endowment.

The 2022-23 season of Music at Noon: The Logan Series at Penn State Behrend will begin Sept. 13 with a performance by the brass-funk band Lucky Chops. All concerts are free and open to the public.