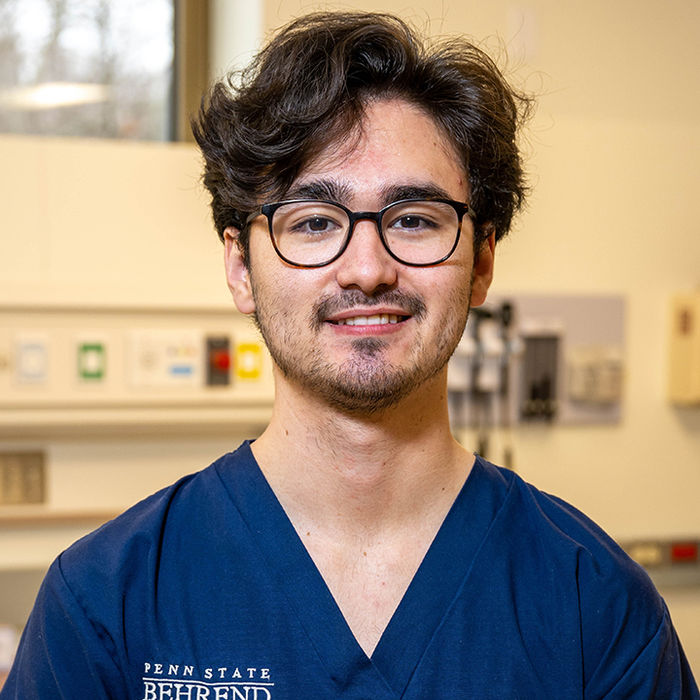 Scholarships: The Clark Family Scholarship and the Class of 1922 Memorial Scholarship, as well as several grants to aid in my undergraduate research.

Why did you choose Behrend? Initially, I did not. I applied to the nursing program and the Schreyer Honors College at University Park but was not accepted. So, I did some research and found Behrend, which had a BSN nursing program and campus honors program. Erie also had a few major hospitals, which was a key factor, as I wanted the best clinical experiences. I applied and was accepted to the nursing and Behrend Honors programs.

Serendipity: It turns out that not being able to attend the campus I thought I wanted to attend was one of the best things to happen to me. At Behrend, I immediately made connections with my peers and faculty, was able to easily get involved in clubs, and being so far from home, I was forced to grow as an individual.

On choosing nursing: I chose nursing for the reason most people do – I like helping people. It’s incredibly rewarding to care for someone and watch them improve, knowing that you played a role in their recovery. It’s also very humbling to have the responsibility of caring for individuals on some of the worst days of their lives. Nursing also involves a great deal of critical thinking, especially in the ICU. However, I have always enjoyed my science classes the most, which is why I have also pursued research and a minor in Biology.

Proudest accomplishments: I am proud of a lot of what I have done at Behrend, especially since so many things were new for me. I held executive board positions in multiple clubs, became a Schreyer scholar and completed a thesis, became a tutor, and won scholarships. But the things I’ll carry with me are the relationships I made with students, staff, and faculty that have shaped my time at Behrend and the trajectory of my future.

Involvement: I am the treasurer of Scrubs Club, a pre-health club that exposes students to different disciplines within the field of healthcare through guest speakers, advising, and volunteer opportunities. I joined Cultural Cooking Club (CCC) in my first year and have served as everything from secretary to president of the club. CCC’s mission is to explore the world and its many cultures through the lens of regional and national dishes.

Awards: In 2019, I received the Evan Pugh Scholar Award, which is given to the top five juniors and seniors.

Don’t give up: I eventually joined the Schreyer Honors College during my junior year, which proves that just because one path to your goal is blocked, doesn’t mean another one won’t open up.

The good life, defined: A good life involves happiness, fulfillment, and purpose in whatever forms those come in. Material possessions, recognition, and even your GPA often steal the spotlight, but at the end of the day, our close personal relationships are our greatest legacy and what I believe matter the most.

He’s a music man: Beyond science and medicine, I love music. I think it’s amazing that combinations of sound can have such a profound effect on us and be so evocative. I’d like to learn how to play a few instruments now that I’ll have more free time.

Grant plans to take time for a cross-country solo trip to explore more of the country and scout locations where he might want to live. He’ll then look for a nursing position in a critical care specialty, preferably trauma medicine. He plans to return to school in the future to work on a graduate degree in the sciences or as a nurse anesthetist.