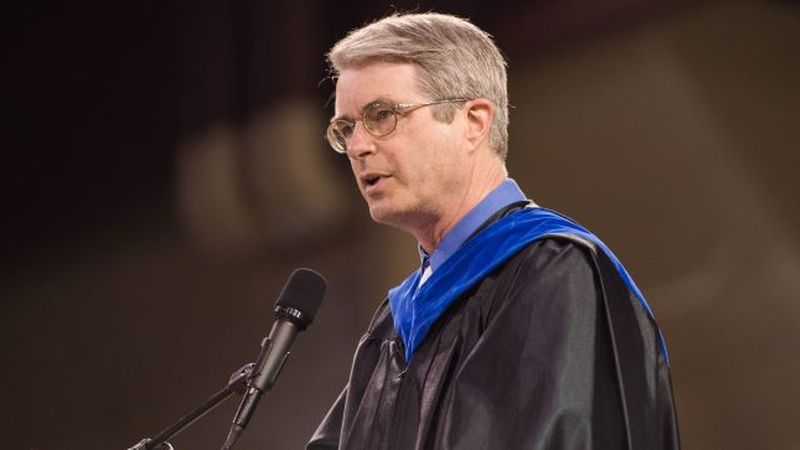 Jonathan Hall began his teaching career at a plywood chalkboard in Borneo. Now, about to retire, he shares some of his accumulated wisdom.

Jonathan Hall, an associate teaching professor of physics at Penn State Behrend, began his career in a remote area of Borneo, with painted plywood chalkboards and a hand-cranked, mimeograph-like machine. He taught in a language he had learned just three months earlier.

This month, Hall will finish his career in education from home, where he has been teaching remotely, using online videoconferencing software and a host of other high-tech tools that would have been inconceivable at the start of his career.

And yet, he says, not much has changed.

“Though the technology available today for education is very different, the key ingredient for student success has not changed,” said Hall, who has taught at Behrend for 32 years. “The desire to learn is the most important part.”

That desire can be stamped out quickly in a physics class, a subject many students find intimidating. Hall learned to build students’ confidence first.

“In my general education physics course, I found that if I started with a topic that students enjoyed, such as color and light, their confidence in their ability to learn physics enabled them to achieve greater success in the course,” he said. “We still did the more challenging topics, but students did better when I would ease them into it later in the course.”

Throughout his career, in which he also taught astronomy and civic and community engagement, Hall said he has learned as much as he has taught. We couldn’t let him retire without collecting some of that accumulated wisdom.

What brought you to Penn State Behrend?

A 1998 Mazda hatchback. And a job teaching at a college!

Which classes have been your favorites, and why?

The advantage of teaching astronomy is that it’s not called what it actually is, which is “the physics of the universe.” Because it doesn’t include the word “physics,” students relax, and enjoy learning.

What about your civic engagement courses?

What I enjoyed about civic and community engagement is that it was team-taught with faculty from other disciplines, including communication, psychology and sustainability. It was truly interdisciplinary, which was great, and I learned a lot from my colleagues. And with the service projects, students were able to put into practice what they learned in their majors.

What do you remember most about your first year of teaching?

I had been a high school teacher for five years before coming to Behrend. When I started teaching college, I didn’t miss the “supervisory” duties of a high school teacher, such as monitoring homerooms and study halls. At the college level, I could focus on teaching students, not monitoring them. Also, though I wasn’t any smarter of more qualified than I had been before, the respect people give college faculty – especially the parents of students – was eye-opening.

Do you have a different perspective on the profession now?

When people ask me what I teach, I tell them I teach young people, not a subject. As teachers, we have the task of preparing our students for the future; content knowledge is often a means by which we teach more important lessons about life.

What have you learned the hard way?

I started my career as a Peace Corps volunteer, and it truly was the toughest job I’ve ever loved. I had 25 class preps every week in a language I had only started learning three months before. During the first three months, I wondered if I had made a mistake; about a third of the volunteers in my training group quit during this time. But I toughed it out. Things got better, and I enjoyed my second year so much that I extended my assignment and served three years.

In order to survive those early months, I learned to listen intently; to pay attention to and catch both the verbal and non-verbal cues; to listen to everything the person was saying; not just the words. That skill has made me a better teacher, and, I hope, more understanding of others.

What’s the secret of life?

Since, in Malaysia, I was a “guru,” I’ll recommend as a starting point in your quest the “Galaxy Song” from Monty Python’s “The Meaning of Life.”

I didn’t say I was a good guru…

Any other parting wisdom?

In Asian culture, keeping harmonious relationships within the community is often the top priority. In America, we emphasize individualism. I think that in a healthy community, there is a balance of both – freedom of individual expression, along with concern for others.