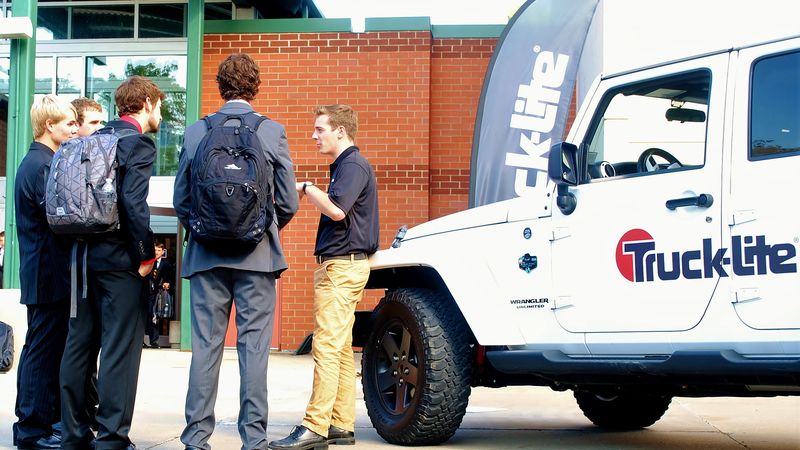 Truck-Lite Co., LLC, a worldwide leader in LED lighting systems for commercial vehicles, is relocating its headquarters to Penn State Behrend’s Knowledge Park, where the company will have better access to engineering and technology talent as it prepares for the transportation industry’s shift to electric vehicles in the years to come.

“As the transportation industry shifts toward electric vehicles, developing new innovations for customers relies on our ability to attract, develop and retain qualified talent,” said Brian Kupchella, CEO of Clarience Technologies, the parent company of Truck-Lite. “Relocating our headquarters to Knowledge Park and expanding our association with Penn State Behrend – a major college of one of the country’s top universities, and a longstanding Truck-Lite partner – creates a strong pipeline of future electrical engineers, data scientists and business leaders.”

Truck-Lite will lease nearly 30,000 square-feet from Penn State Behrend for its back-office operations. The college will invest in enhancements to its Advanced Manufacturing and Innovation Center, which will contain Truck-Lite’s laboratory and test space.

“Truck-Lite is a manufacturer renowned for innovation in its field with an established Pennsylvania footprint, and with its new proximity to and support from the talent pool at Penn State Behrend, the possibilities for continued growth and product development are endless,” Gov. Tom Wolf said.

The Pennsylvania Department of Community and Economic Development is supporting the company’s move to Knowledge Park with a $270,000 Pennsylvania First grant.

Approximately 90 Truck-Lite employees, including engineering, planning, product testing, finance, marketing and customer service staff, will work at the new location, which is targeted to open later this year.

As truck manufacturers shift significant resources toward development of electric powertrains and with full-scale production of electric vehicles on the near horizon, Truck-Lite is working to align its research and development capabilities with the evolving technology requirements being set by vehicle manufacturers.

The company believes the future research and development capabilities needed to design components in next-generation electric vehicles will require its workforce to have deeper expertise in electrical engineering, software programming and advanced analytics. By locating its new headquarters at Knowledge Park, the company will have more access to a specialized talent pool.

The move also increases opportunities for Truck-Lite to engage in Penn State Behrend’s Open Lab environment, which provides access to student and new graduate talent, faculty expertise and facilities. Truck-Lite will build two research labs in the Advanced Manufacturing and Innovation Center: a 1,745-square-foot product-modeling lab and a 4,075-square-foot photometric testing facility, which will be used to study the light emitted by LEDs, lamps and other devices.

The move expands a long history of collaboration between Truck-Lite and Penn State Behrend: The company has sponsored student research projects in the college’s School of Engineering since 2006 and later opened an innovation center at Knowledge Park. In March, Clarience Technologies announced an Early Career Professorship at Behrend. The company will work with a faculty member to guide four senior design projects in the field of data analytics.

“We look forward to this new phase in our longstanding partnership with Truck-Lite and Clarience Technologies,” said Ralph Ford, chancellor of Penn State Behrend. “The most valuable resource for any company is its people. By moving to Knowledge Park, Truck-Lite is investing in Erie as both a source of talented employees and a place where the Truck-Lite team can grow and thrive.”

The Knowledge Park headquarters will be Truck-Lite’s fourth location in Pennsylvania. The company has more than 800 employees in manufacturing and distribution hubs in Coudersport, McElhattan and Wellsboro, as well as six additional sites in North America and Europe.