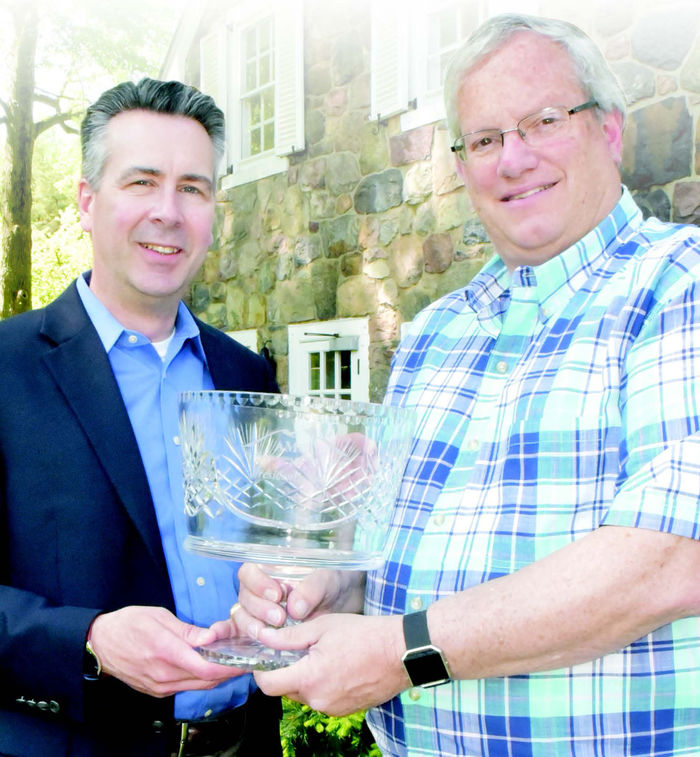 Penn State Behrend's Lions again won the Allegheny Mountain Collegiate Conference (AMCC) Presidents Cup. This is the fourteenth consecutive championship for the Lions, who have earned the honor for the most outstanding overall athletics program in the conference a total of seventeen times.

We are proud of our players, coaches, and athletics staff for yet another exciting and successful season!

AMCC Coaches of the Year

AMCC Players of the Year

AMCC Rookies of the Year

It’s not easy to pull one over on Brian Streeter. The senior athletics director says that he “knows about pretty much everything going on in athletics” at any given moment.

So the oversized presentation check leaning up against a wall at last summer’s Herb Lauffer Memorial Golf Tournament caught his attention.

“I thought, ‘Now, why did we bring that?’” he said. “I figured someone grabbed it by mistake, and we’d just take it back to the office after the tourney.”

It wasn’t a mistake. It was a surprise and a rare opportunity to shine a spotlight on the notoriously humble Streeter, who is entering his twenty-second year at the helm of the athletics program. He has led the Lions to seventeen Allegheny Mountain Collegiate Conference (AMCC) Presidents Cup awards and 113 AMCC Championships since the inception of the conference in 1997.

To honor Streeter and his legacy at Behrend, the athletics department created an endowed fund that will help studentathletes for years to come. Money from the fund can be used for enhancements to athletics, such as equipment purchases, coach development programs, and more.

Streeter said he was completely, but pleasantly, surprised.

“It’s something that will continue paying out for years,” Streeter said. “It’s a nice legacy.”

The college’s offices of Athletics and Development were able to raise $25,000 to activate the endowment, but are still accepting donations to grow the gift.

Wrestling practice outside the Reed Building

Wrestling on the lawn

One way to draw attention to the new wrestling program is to host practice outside the Reed Building in the center of campus on a beautiful fall afternoon.

Every spring, the athletics department works with members of Greener Behrend to host a new-and-used sale in Erie Hall with items left behind by students or donated by Behrend community members. This year’s sale raised a record $3,823 for United Way of Erie County. Thanks to all who put a lot of time, muscle, and sweat into this sale, which not only raises money for charity, but encourages reuse of items that might otherwise be thrown away.