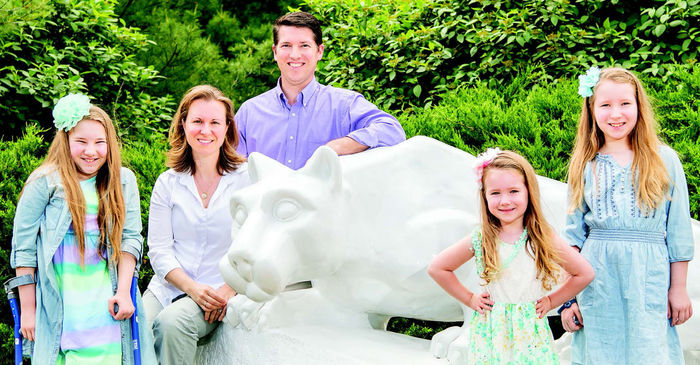 Joy Zahniser Mellish ’02, ’04 M.B.A., and her husband, Thad ’01, ’06 M.B.A., knew their first child would change their lives, but they had no way of knowing just how fully Emily’s arrival would upend expectations and set them all on a different life journey.

And that’s okay, Joy will tell you. One of the first things she and Thad, Penn State Behrend sweethearts, learned about parenting a child with special needs is that flexibility is required.

“We have spent unplanned days in doctors' offices, home sick, or recovering from surgeries in the hospital during holidays,”

Joy said. “We have learned that any day can be a cause for celebration, especially those spent out of the hospital.” Joy and Thad’s daughter, Emily, was born in 2005 with spina bifida and severe scoliosis—and with the beauty and generous spirit of an angel.

When she was just six years old, Emily began raising money—selling baked goods during the neighborhood garage sale—to help other kids like herself. In 2012, she started crafting for charity.

“She had a major back surgery that year and knew she’d have to sit a lot during recovery, so she began making beaded bracelets to sell and donating the proceeds to Shriners Hospitals. She hasn’t stopped since,” Joy said.

Emily has had plenty of down time to craft over the years. At last count, she has had thirty surgeries, including several leg-lengthening procedures and biannual back operations to maintain the rod that stabilizes her spine.

Over the years, Emily’s handiwork has helped her raise more than $120,000 for Shriners Hospitals and other charities. She’s had some help.

“Emily hosted several bead-stringing outreach events and got groups of volunteers from various schools, organizations, and clubs to help her string beads,” Joy said. “People came from all over the region to participate. It was really great.”

Emily, 12, plans to continue giving back to help young people like herself.

“She dreams of working as a child life specialist and helping kids in a medical setting,” Joy said.

No doubt she will; Emily is one determined girl.

A force from birth

With all due respect to Emily’s physicians, they underestimated her from the start.

“We were told she would never walk,” Joy said.

Emily not only walks, but she sings and dances, too. Her favorite place to perform? The Shining Stars Pageant, an annual Erie County talent show for those with special needs, that her mother, a management information systems graduate, produces each spring with help from several other volunteers.

“It started as a beauty pageant put together by a high school student as a fundraiser for a club,” Joy said. “In 2015, I was asked if I’d be interested in taking over the show.”

Joy changed the format of the program to a talent show so that those with special needs of all ages, genders, and abilities could participate and share whatever gifts they have.

“We’ve had everything from magic tricks to comedy skits to hula hoop dancing to traditional talent show staples like singing,” Joy said.

The annual spring show is a family affair for the Mellishes. In the last few years, it’s been a sister act with Emily joined on stage by Taylor, 9, and Lauren, 5, who want to support their sister, share the limelight, and join in the fun. One year, Emily and her father, a mechanical engineering graduate who is now the vice president of proposals and aftermarket at CMI Energy in Erie, lip-synched and acted out Love is an Open Door from the movie Frozen.

Participants do not have to audition or pay to be in the show. Audience members are asked for a $5 donation. It’s money well spent as most leave the program with aching faces from smiling for two hours.

“Our audience members don’t spend a moment judging the quality of the performances, but instead they rejoice in the happiness of the moment and the person on the stage,” Joy said.

“We all, every one of us, have disabilities, like fear and societal expectations, that keep us from doing the things that lead us to be happy,” Joy said. “What I see in those people with obvious ‘disabilities’ is that they don’t ever let that get in the way of enjoying themselves. They embrace life, live fully, and find joy in the everyday things many of us take for granted.”