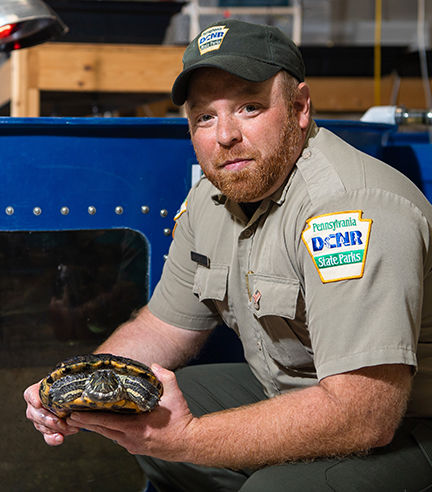 Ray Bierbower poses with a turtle from his classroom

Ray Bierbower ‘05 is the epitome of a teacher, always enthusiastically sharing information and educating those around him. But you won’t find Bierbower in a traditional classroom with desks and white boards.

As an environmental education specialist for the Department of Conservation and Natural Resources (DCNR) at Presque Isle State Park, Bierbower’s classroom spans more than 3,000 acres, and his subject matter ranges from fish to climate change to coyotes to cast-iron cooking over a campfire.

In addition to teaching public and school programs, he works with the fish systems in the aquatics laboratory at the Tom Ridge Environmental Center and is the coordinator for the park volunteer program, which includes several hundred people who help at Presque Isle in a variety of ways.

It’s the perfect job for an amiable guy with a lifelong love of nature, the outdoors, and learning.

Bierbower grew up on a farm in rural Pennsylvania where he spent his free time hunting and fishing and dabbling in carpentry, mechanics, welding, electrical work, and more.

“Like most boys who grew up on a farm, I learned to do a little bit of everything. You know what they say: Jack of all trades, master of none,” he said with a grin.

He smiles a lot. He clearly enjoys his work.

Bierbower thought he might be a veterinarian, until he shadowed one and realized it wasn’t the job for him. In college, he gravitated toward the School of Science and earned a degree in Biology. His senior project at Behrend involved what is still the most extensive dietary study of coyotes at Presque Isle State Park.

“Seems like other researchers don’t like to dig around in coyote scat,” he said with another grin.

He started with the DCNR at Presque Isle as a seasonal environmental education specialist in 2008 and became a full-time educator in 2010.

He likes all the programs the park offers, but especially enjoys leading night hikes at Presque Isle and teaching anything water- or fish-related.

“I can’t even tell you how many times I’ve helped a kid catch their first fish,” he said. “I really enjoy it; they are so excited.” Bierbower likes fish, not just catching them, but raising them. At work, he grows several hundred steelhead and brown trout in the aquaponics lab. The fish are raised for educational purposes and released in the spring.

But Bierbower’s most impressive fish operation is in his own home where he has more than seventy tanks in his basement fish room, pursuing both a hobby and a business. He breeds a variety of plecostomus, a common aquarium cleaner fish, and angel fish, which he sells to local aquarium shops, to fish clubs, and on eBay.

he said. He gets up at 4:40 a.m. to work on his “farm,” feeding all the fish and cleaning a third of the tanks every day, so that each tank gets fresh water twice a week. Not all the aquatic creatures are for sale; some, like the goldfish and African clawed frogs, are just for fun.

After his morning shift at home, Bierbower heads to his job at Presque Isle where he said there is always plenty to do and learn. Sometimes, his students even stump him.

“Last week, a child asked me if turtles can get ticks,” he said. “I didn’t know. I had to go look it up. Turns out, they can. You learn something every day here.”