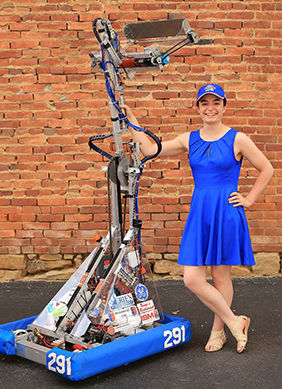 Julia Cecchetti’s dog is a special kind of mutt: a DIY quadruped – a robot – that can walk and trot and pivot in six different directions. She calls it Rocky.

Cecchetti, a Mechanical Engineering junior at Penn State Behrend, built the dog because she wanted to better understand inverse kinematics. That’s the math that links independent joint angles – an ankle, knee, and hip, for example – to move an object into a specific position.

“If you want to move the foot,” she said, “you first have to figure out the exact position and sequence for each of the motors above it. It’s a process.”

She figured it out within a week.

“Julia is a builder,” said Jill Johnson, lecturer in mechanical engineering. “She likes putting things together, seeing what works, and watching it go. It is absolutely apparent that she lives for that.”

Cecchetti has a restless intellect. Her parents taught her basic math with M&M candies: When she subtracted properly, she could eat those pieces of candy. She was in kindergarten at the time.

By high school, she had learned to challenge herself. When she lost interest in geometry, frustrated by what she felt was the slow pace of the class, she read ahead, working her way through more advanced textbooks. She taught herself Algebra II, Trigonometry, and Calculus, and then tested out of those courses.

With a professor’s recommendation, she enrolled part-time at Penn State Behrend, taking advanced calculus and a chemistry course. She was still in tenth grade.

The next year, she took more college courses. She joined the robotics club and the SAE Supermileage team. She helped Dr. Joseph Paullet, professor of mathematics, design a robotic snake, which can move using six different gaits.

A year later, as a senior, all but one of her classes were at Penn State Behrend.

Cecchetti enrolled at the college fulltime in 2018. By then, she already had sixty-four credits on her transcript.

She took the spring semester off to intern at a California-based aerospace company, which kept her on through the summer. When she returns to the college this fall, she will have essentially skipped her sophomore year.

She still reads ahead, borrowing books from Brian Lani, lecturer in mechanical engineering.

“She really gets excited about engineering and mechanical design,” Lani said. “That helps hold her interest.

“She also understands the applications of these core concepts, which can be difficult to master,” he said. “She knows why she has to know them, and that helps her see the finish line.”

Cecchetti already has started planning her senior capstone design project: a static-fire, liquidfueled rocket engine. She can show you the CAD model.

“Rocket propulsion is super-complex,” she said. “It uses every branch of engineering: thermal, combustion, chemistry, fluid dynamics, strength of materials, and more, all wrapped up in one system. It’s one of the most challenging engineering problems you can take on. I love that.”