On Life, Luck, and Love 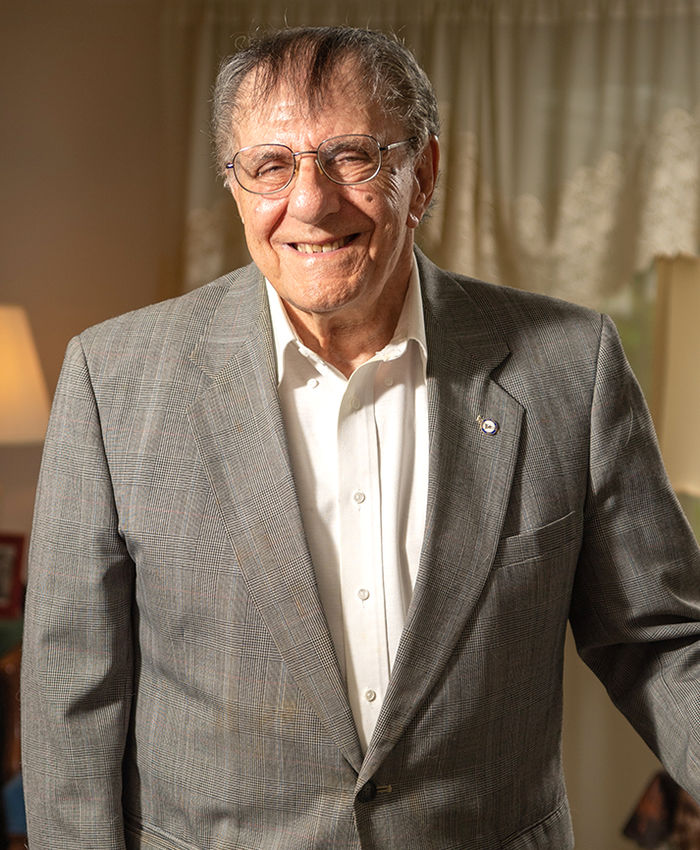 Tony D'Angelo graduated from Behrend in 1951, the second class in Behrend's history

“When I die, it’s going to take the mortician a half an hour to take the smile off my face,” he said. “I’ve had a nice life.”

Anyone who had been there at the beginning might not have predicted that. In July of 1926, D’Angelo was born to his sixteen-year-old mother in an apartment on lower Holland Street in Erie.

D’Angelo was from a different generation, though, a time in which the circumstances of your birth and your family’s finances often mattered less than your willingness to work hard. After his high school graduation, he enlisted in the U.S. Air Force and was a pilot during World War II.

“The war in Germany ended two days before I was scheduled to go and they grounded me,” he said.

Lucky break No. 2: While he was away, Penn State opened what was then called Behrend Center in his hometown, making higher education convenient and, thanks to the G.I. Bill, affordable.

“I didn’t want to work in a foundry; I wanted to use my brain,” he said. “Going to Behrend was one of the best decisions I made in my life.”

D’Angelo earned a two-year degree in Industrial Electricity and Electronics and was runner-up for the top spot in his graduating class of 1951, the second class in Behrend’s history.

He opened his own business— DeAngelo TV and Electronics—on the corner of 10th and Parade streets in Erie. (A note on the spelling of his last name: He has gone by both DeAngelo and D’Angelo because the nuns who taught him in grade school told him it was DeAngelo and, as he recalls, “you just didn’t argue with nuns back in the day.”)

Lucky break No. 3: Perfect career timing. It was the height of the electronics era and D’Angelo turned a profit for thirty-three years.

“I did OK,” he said. “I never set the world on fire or made a million dollars, but I owned and controlled my own business all of my life, and I really enjoyed it. Being happy at your job is one of the most important things in life.”

Another of those important things? D’Angelo, who just turned 93, will tell you with no doubt: love.

“Her name was Catherine Jell, but she went by Kitty,” he said. “She wanted to go to the Glen Miller dance, but she’d just broken up with her boyfriend and didn’t have anyone to go with, so a friend set us up. She took to me like a bear takes to honey. Oh, she was so beautiful. She looked just like Liz Taylor. I couldn’t believe a beautiful girl like that would go out with a guy like me.”

She not only went out with him, she married him. They had a daughter and, later, two grandchildren. They celebrated their fortieth wedding anniversary, before she passed away from ovarian cancer sixteen years ago.

“Those were the best forty years of my life,” he said. “I tell you, if she’s not in Heaven, there is no Heaven. She was an angel.”

Today, D’Angelo, who still lives in the Erie area, spends time with his daughter and grandchildren and enjoys connecting with old friends. He’d love to talk to any fellow Behrend alums from the early years. You can reach him at (814) 838-4730 or [email protected].