Students witness history in the making in Europe 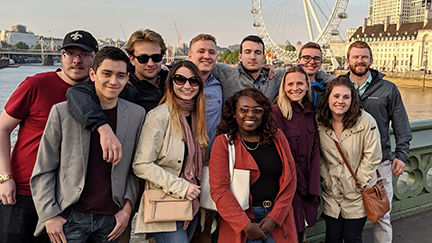 This spring, eleven Penn State Behrend students and two faculty members participated in a fifteen-day study abroad experience in London and Kyiv, Ukraine, where they got a firsthand look at European politics at a particularly significant time in history.

In Kyiv, the students heard six lectures by Kyiv School of Economics faculty members about issues related to Ukraine’s integration into the European Union, as well as the country’s economic, political, and social development since the fall of communism in 1991. The students visited Ukraine’s parliament as well as the offices of the World Bank and International Financial Corporation. They also attended a roundtable with a member of the European Union delegation in Ukraine and arrived in Kyiv in time to witness the inauguration of the new Ukrainian president, Volodymyr Zelensky!