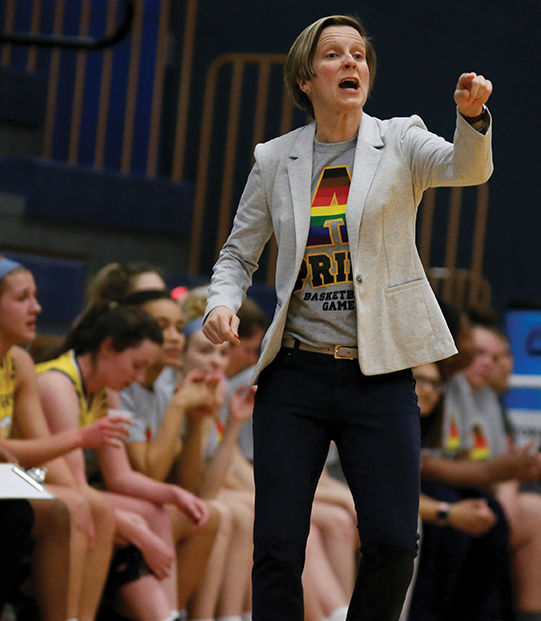 Kate Costanzo, who graduated from Behrend in 2002 with a Mathematics degree.

Kate Costanzo, who graduated from Behrend in 2002 with a Mathematics degree and is now the head women’s basketball coach and senior woman administrator at Allegheny College, has been nominated for the inaugural NCAA Division III LGBTQ Administrator/ Coach/Staff of the Year Award.

The award is intended to honor the service, leadership and promotion of LGBTQ inclusion by an LGBTQ athletics administrator, coach, or staff member in Division III. It is one of a trio of new awards created as part of the NCAA’s OneTeam initiative, alongside awards for the LGBTQ Student-Athlete of the Year and Athletics Department of the Year.

Now entering her fourteenth season at Allegheny, Costanzo has served as the co-chair of the Pride Alliance, the college’s faculty and staff LGBTQ+ group. She will be recognized as the 2020 award winner at the virtual 2021 NCAA Convention in January.

Three Penn State Behrend alumni were featured in the Erie Reader’s “40 Under 40” list for 2020. The list honors accomplished young professionals making a difference in the Erie community. Featured were:

Neumaier, who earned his undergraduate degree in mathematics and his master’s degree from Penn State Behrend, joined Erie Insurance in 2004 as a lead information security analyst. He was promoted to security architect in 2009 and has held various leadership roles in information security since 2010. Before assuming the CISO role, he was vice president of information technology.