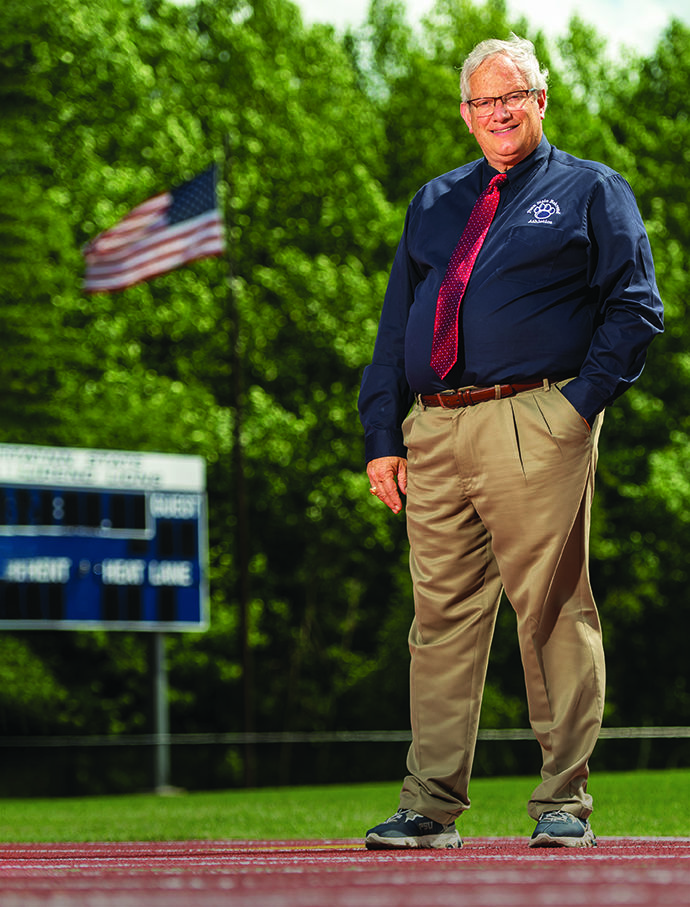 When Brian Streeter, senior director of Athletics, arrived at Penn State Behrend in 1997, the college’s athletics program consisted of ten teams and one facility, Erie Hall.

Today, Behrend boasts twenty-four teams, and Streeter often finds himself using a golf cart to travel to the fields and facilities located from one end of campus to the other. From Junker Center and a soccer-lacrosse stadium to an eight-lane competition track, ball fields, and tennis courts, he has been the driving force behind nearly a quarter century of growth in athletics at Behrend.

It’s easy to see why Streeter was inducted into the Erie Sports Hall of Fame this year. It was a long time coming, but mostly, that’s because he kept declining the honor and instead suggesting other people to receive it. He’s like that.

Life at Behrend has come full circle for Streeter. Soon, Erie Hall, where the college’s program began, will be demolished to make way for a  25 million fitness and recreation complex.

The new facility will be another jewel in Streeter’s crown, though he would undoubtedly cringe at that reference. The last thing he wants to be is a king. Streeter is a head coach, through and through—collaborative, pragmatic, strategic, and hard-wired to tackle issues head-on.

Before coming to Behrend, he was head basketball coach at Hobart and William Smith Colleges. Sometimes, he misses pacing the hardwood, but he has never really stopped leading a team.

“I coach now,” Streeter said. “My coaches are my team.”

In fourteen years, Gabi Quiggle, administrative support assistant in Athletics, has heard him raise his voice just one time. She remembers it well because it is so rare for Streeter, who runs a tight but calm ship.

This fact alone is likely a key reason that Streeter can count on one hand how many head coaches have left Behrend in the past twenty-three years. It’s a remarkable testament; longevity is rare in college sports. Most head coaches move on every five years, and most athletic directors every seven.

But at Behrend, Streeter and his coaches are as solid and reliable as the performance of their student-athletes, on and off the field.

“We always refer to our players as student- athletes because they are students first,” Streeter said. “We are a Division III school, which means academics come first. We absolutely understand that.”

He is quick to note too the appreciation by college leadership and faculty members for the importance of athletics.

“The crux of the growth here,” he said, “are strong working relationships between Athletics and the rest of the college—and a mutual respect for academics and athletics.”

“I have thirty-five people in my department with very different personalities,” he said. “We have to be able to talk to and try to understand one another, even if the best we can do is agree to disagree.”

It’s a strategy that extends beyond Athletics. “I really feel like we’ve knocked down the barriers between faculty members and Athletics here at Behrend,” he said.

He gives much of that credit to a good working relationship with Dr. Chuck Brown, associate professor of accounting, who has served as Faculty Athletics Representative at Behrend for over ten years. It’s reflective of Streeter’s management style, too.

“I’m sort of a firefighter,” he said. “As soon as there is any sort of problem, I want to address it. I want to do it face-to-face so that little problems don’t explode. Let’s get together in a room and figure it out.”

He can empathize with nearly anyone he works with because he wears a lot of hats himself. “There is not a job here in Athletics that I haven’t done, so I can understand almost any problem and do my best to help them with it,” he said. “If a team is losing a lot, I know that nobody is taking that harder than the coach. You don’t give up on them. You let them know that they have your full support, win or lose.”

Streeter also makes time to meet regularly with student-athletes. He started the Student Advisory Committee several years ago, in an effort to hear directly from students.

Spend any amount of time with Behrend’s coaches, staff, and student-athletes, and you quickly pick up on the one-big-family vibe. There’s a sense of mutual support, and that extends to teams rooting for one another.

“Every team has a buddy team, and they are expected to attend one another’s games,” Streeter said. “It worked so well that we have double buddies now. Every team now has two other teams they cheer on. I know we ask a lot of our student-athletes, but they love sports, and they can give time to support one another.”

Volunteerism is also something Streeter believes strongly in. Every team does some form of service. Streeter, a thirty-five-year Red Cross board member and supporter of Special Olympics, doesn’t see accolades as the end goal of those volunteer efforts.

“We don’t need or want recognition for those projects,” he said. “We help others because it’s the right thing to do. It’s about stepping outside yourself and helping others achieve success.

Wish list: “I’d like to add competitive dance and cheer,” he said. “Those teams are sports. And I’ll forever hold out hope for football.”

Favorite pro teams: “I grew up in New York, so I love the Yankees, Giants, Knicks, and Rangers.”

Athletics Hall of Fame Class of 2020