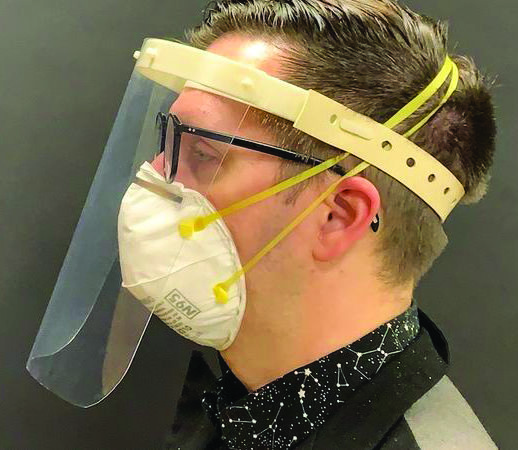 Behrend researcher Jason Williams designed COVID-19 face shields, teamed up with partners to mass-produce and ship them to health-care workers

When the Pennsylvania Department of Health reported a critical shortage of protective equipment for medical workers in COVID-19 environments, researchers at Penn State Behrend partnered with Case Western Reserve University and manufacturing companies in Erie and Ohio to design a plastic face shield that could be mass-produced. By late April, the team was building 10,000 shields every day.

The team expects to produce nearly 240,000 face shields, which provide an additional protective barrier when working with patients who have the COVID-19 virus. Erie-built shields have been shipped to hospitals, health-care workers, and first responders in at least three states.

“Our hospitals and health-care workers desperately needed this protective equipment,” said Jason Williams, assistant teaching professor of engineering at Behrend. “We had to get it to them quickly, so we tapped into a network of local companies that we knew could help.”

The project began as Williams looked at open-source designs for protective face shields. A colleague at Penn State’s University Park campus had asked him if one of the designs, which was configured for use on a 3D printer, could be adapted for injection molding. That would allow companies to scale up their production of the shields, which have a polypropylene frame and a rubber strap.

The original design, which was configured for a 3D printer, required a minimum build time of three hours for every frame. Injection molding cut that to less than 40 seconds.

Switching to polypropylene made the shields easier to clean, and therefore safer to reuse. Headbands produced through traditional 3D printing can be sterilized only in a hydrogen peroxide vapor chamber. The new design can be sterilized in a medical autoclave, which is standard equipment in most medical settings.

Williams designed the shield with Ian Charnas, director of innovation and technology at the Sears think[box] at Case Western Reserve, and Bill Rabbitt, an engineer at Nottingham Spirk, a Cleveland-based product design company. They also developed a supply chain that includes three Erie manufacturing companies: Port Erie Plastics, which molds the frames; Munot Plastics, which is producing the shields; and Bliley Technologies, which manages logistics and distribution.

Lake Erie Transport is shipping orders at a reduced rate.

The companies are completing the work at cost, said Steve Rosenzweig, director of finance at Bliley Technologies. “Three weeks after our first meeting, we had product on a pallet, shipping to customers,” he said. “That’s a quick turnaround, and it underscores the vendors’ commitment to this project.”

The Erie County Gaming Revenue Authority provided an early boost to the project: a $6,700 grant to pay for the initial production mold. An additional $15,600 from ECGRA provided a second mold, as well as die-cutting of the assembly’s rubber strap. That doubled production, creating 10,000 shields every day.

“We were able to move quickly because of our relationships with the manufacturing community,” said Williams, who made his design available to others at no cost, at whitelabelfaceshields.com, “and with ECGRA, which has shown a consistent commitment to seeking and supporting projects that move Erie forward.”