Penn State Behrend Students Succeed In and Out of the Classroom 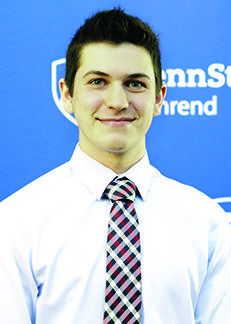 Here are just a few recent examples of their accomplishments

Scientific discoveries often happen by accident: An experiment goes not quite as expected, and the scientist says something like, “Huh, that’s weird.”

For many, that moment comes after years, or even a full lifetime, of work. For Ethan Fontana, a Mechanical Engineering senior, it came in his first year of college.

Fontana, a native of Lower Burrell, had passed college-level physics in high school, thanks to a dual-enrollment AP course, but he needed a lab credit for the course to be accepted as a replacement for PHYS 211: Mechanics at Penn State.

Professor of physics Chuck Yeung helped him craft an individual study course that would meet the college’s requirements. While working in the lab independently on an assignment involving a ticker tape timer, an instrument that measures short intervals of time, Fontana noticed something odd.

“I was obtaining inaccurate and inconsistent values of gravity,” he said. “I approached Dr. Yeung about it. He was unable to find anything about the issue online, so he suggested we do a research study on it.”

After hours in the lab, performing trial after trial, they concluded that external friction was causing the effect. They were able to calculate it with minimal uncertainty.

Having determined the cause, Fontana worked with Yeung to produce a poster for the Sigma Xi Undergraduate Research and Creative Accomplishment Conference. His entry tied for first place in the physics/chemistry division.

Members of Erie’s Food Policy Advisory Council (FPAC) recognized that a similar list, made up specifically of locally available guidance and support, was lacking for the Erie region.

To fill that gap, a Behrend Sustainable Food Systems intern, Pearl Patterson, a senior Psychology major, worked with a core Erie FPAC team to develop two cohesive documents outlining the resources available. The information was translated into multiple languages and shared widely through the area.

“The skills I have developed at Behrend and as a Sustainable Food Systems intern—collaboration, outreach, and providing a student voice to community leaders—were exactly what I needed,” says Patterson.

The Lions, Behrend’s student-athletes, are competitive on every level, including academics. Dr. Chuck Brown, associate professor of accounting and the college’s faculty athletic representative, shared the following statistics:

Last year, in the spring 2019 semester, the average cumulative Grade Point Average (GPA) of Behrend’s 324 student athletes rose to 3.14, with 64.2 percent of all student-athletes maintaining a 3.0 GPA or above.

Seventeen of 22 teams earned an average GPA of 3.0 or above.

Forty-four student-athletes were inducted into the National Athlete Honor Society, earning a GPA of 3.40 or above.

Nearly 140 student-athletes earned AMCC All-Academic Team honors with GPAs of 3.20 or above.

While our student-athletes were having success in the classroom, they also carried that success into competition as they captured the Allegheny Mountain Collegiate Conference Presidents Cup once again.