How Sweet It Is

The women’s volleyball team was one set away from winning back-to-back conference titles with a 3-2 defeat to Pitt-Bradford. The men’s golf team battled back from fifth place after day one of the AMCC Championships to earn second by just nine strokes.

The men’s cross country team placed second out of eight teams at the AMCC Championships. The Lions had twelve runners in the Top 23, while nine of them earned the AMCC All-Conference. Zachary Tingley was named the AMCC Newcomer of the Year. On the women’s side, Behrend placed six runners on the All- Conference Team.

A highlight-reel bicycle kick in the 102nd minute lifted the Penn State Behrend men’s soccer team over host John Carroll in the second round of the NCAA Division III soccer tournament. The goal— the ninth of the season for senior Dakota Lange, a forward from Apollo, Pennsylvania—broke a two-overtime tie and carried the Lions into the Sweet 16 round of the tournament for the first time in program history.

It was the team’s second 1-0 win in as many days: The Lions blanked Lycoming College in the tournament’s first round, on November 10.

“These guys know how to grind,” head coach Dan Perritano said. “They have each other’s backs, in terms of how they defend, and they recover well when we lose the ball. We compete well against teams that are better than us because of that.”

Unfortunately, the Lions fell to Calvin College in the Sweet 16 round of the NCAA tournament in November. Calvin entered the Sweet 16 with a 19-1 record and a twelve-game winning streak. 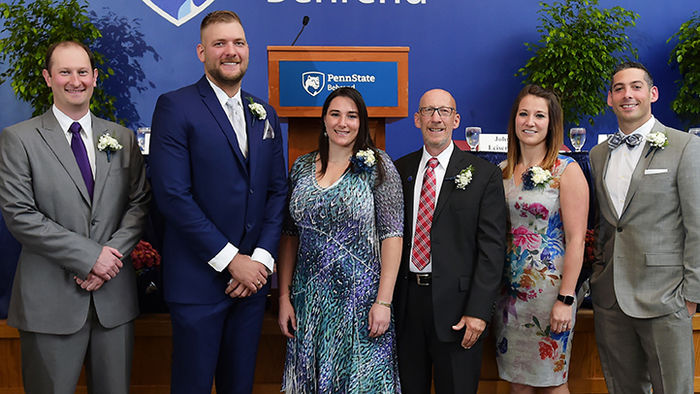 Alumni inducted into Hall of Fame

Six former student-athletes have been added to the Penn State Behrend Athletics Hall of Fame. They are, from left, Dustin Fairchild ’08 (swimming), Kevin Buczynski ’08 (basketball), Kristin Macha ’07 (softball), John Fleming ’76 (soccer), Brittany Yost ’07 (water polo), and Anthony Spoto ’08 (water polo). In addition to this year’s individual honorees, the Athletics Hall of Fame banquet, which was held in the fall in McGarvey Commons, recognized the 1993 women’s basketball team, which was the first to play in an NCAA postseason tournament, and the 1993 softball team, which played in the ECAC tournament.

Dr. Chuck Brown, Penn State Behrend’s NCAA Faculty Athletics Representative (FAR), has been selected to serve on the Division III Management Council, one of the top governing bodies within the NCAA organization.

Brown, associate director of the Black School of Business and an associate professor of accounting, is one of just two FARs in the country to serve on the council. His four-year term began in January.

The Management Council reports directly to the President’s Council and handles the implementation of policies adopted by the NCAA Board of Governors. The council may sponsor legislative proposals; make interpretations of Division III’s bylaws; and handle resolution of issues and recommendations from other committees.

Brown has been a member of the Division III Interpretations and Legislation Committee since 2015 and has been Behrend’s FAR since 2009.

“It’s really great to have Chuck in a leadership position on the Division III Management Council,” said Brian Streeter, senior director of athletics. “This is a national committee, and Penn State Behrend has a seat at the table.”

This spring, Penn State Behrend men's soccer coach Dan Perritano and his daughter, Emma, traveled from Erie to Pittsburgh. By foot. The walk of more than 120 miles was a fundraiser for the Make-A-Wish Foundation. Emma, who has cerebral palsy, had her wish granted in 2009.

It took nearly two weeks to complete the journey. They occasionally had company—Penn State Behrend women’s soccer coach Patrick O’Driscoll joined them for one leg of their journey.

Walking for a cause is not new to Dan and Emma, as they walked across the state in 2015 to raise money for Arc of Erie County. 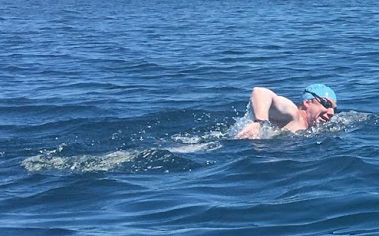 This summer, Penn State Behrend alumnus Rob Cooney, a 2001 Plastics Engineering Technology graduate, swam twenty-four miles across Lake Erie, from Long Point, Ontario, to Freeport Beach in North East, Pennsylvania. The feat took him 13 hours and 32 minutes. He was accompanied by several kayaks on which he had posted inspiration— photos of his wife, his three children, and his father.

“My dad has Parkinson’s Disease, so I used the swim to raise $17,000 for Parkinson Partners of Northwest Pennsylvania,” Cooney said.

Congrats to Rob, not only for going the distance but also for using his athletic goals to help others! #BehrendStrong