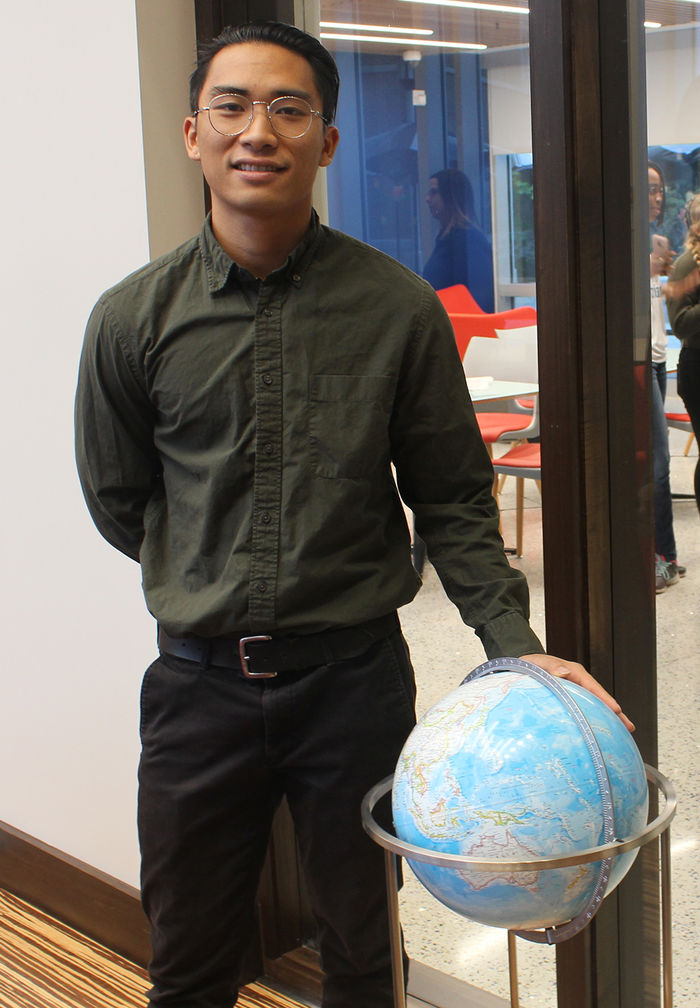 Hannibal Pharathikoune is the resident assistant for the Global Boarders program.

For college students, there are as many lessons to be learned in a shared living situation as there are in the classroom. From laundry to meal preparation to handling roommate conflicts, there is no limit to the soft skills to be honed while living away from home.

And now at Penn State Behrend, students have the opportunity to expand their horizons further through Global Boarders, an international-focused living option in Trippe Hall, the college’s brand-new $28.5-million residence facility.

Living-learning communities like Global Boarders enable students with common interests to live together and share learning experiences that extend beyond the classroom in an atmosphere enriched by distinct academic and out-of-class opportunities.

Nearly fifty students signed up to participate in Global Boarders this inaugural year, with an almost even split of international and domestic students. The students share one floor of the new residence hall where Hannibal Pharathikoune, a senior Chemistry major, serves as resident assistant.

Pharathikoune is an enthusiastic supporter of Global Boarders. Having grown up in a military family, he has witnessed first-hand how enlightening and inspiring it can be to live with people from different cultures and countries.

“As I was growing up, I was constantly moving to a new state or country,” Pharathikoune said. “I was exposed to many unique cultures and people who ultimately inspired me to keep exploring. When I was asked to be part of Global Boarders, I was excited to have the opportunity to interact with a wide variety of residents and learn more about their culture, ideas, and passions, and help them do the same.”

In addition to planned activities, students have chances to connect in more casual ways.

“All of the residents who joined Global Boarders came in with an open mind and desire to expose themselves to new things,” Pharathikoune said. “I regularly see the majority of them in the study lounges and other common areas interacting and helping one another with homework.”

Additionally, he said, students in the Global Boarders program have been taking turns cooking and sharing dishes from their home countries.

“I’m a firm believer that food connects people regardless of their backgrounds,” Pharathikoune said. “These spontaneous feasts have brought the students from the Global Boarders floor as well as other residents in the building together. There may be nothing more effective in embracing a new culture than sharing a meal with one another.”

These formal and informal interactions are what campus administrators had hoped would occur.

“Global Boarders residents are not required to attend the programs we offer in Trippe Hall,” said Kelly Shrout, associate director of student affairs. “It’s entirely up to them how much they want to participate. The experience is as much as they want to make of it.”

“Every other Wednesday, in the fall, we had a guest speaker who presented a topic unique to southeastern Asian countries, which was our focus region that semester, and the events were well received by the residents. Students are actively engaged and sometimes astounded by the information presented.”

Pharathikoune is a native of Okinawa, Japan, where he said there is a cultural belief that the journey is just as important as the destination.

That’s certainly true for students in Global Boarders who have chosen to make the journey to a degree as valuable as the degree itself.