One Short Life Has Long-Lasting Impact 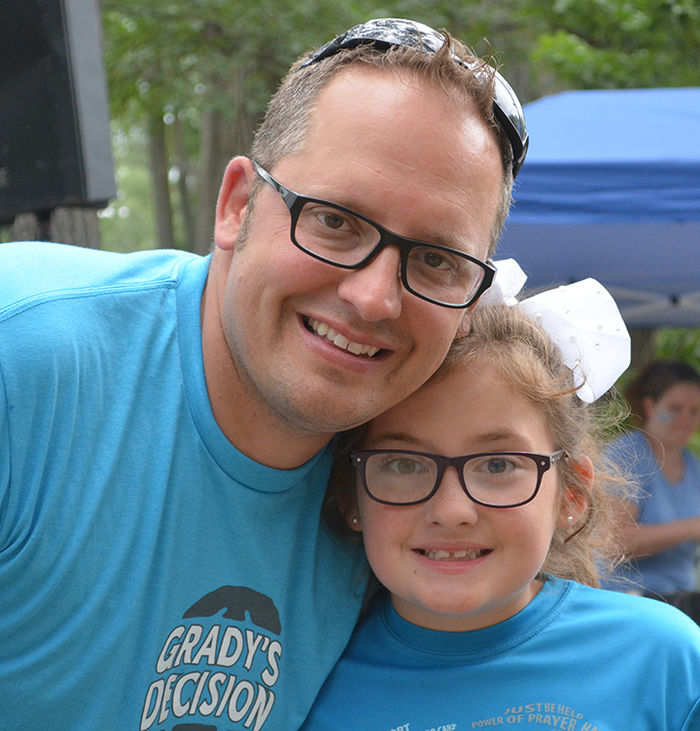 The thought of even moving was overwhelming, but then again, nothing could be more painful than what Smith and his then-wife Katrina were experiencing.

The couple had just made the decision to remove their son, Grady, from life support. He and his twin sister, Gianna, had been born prematurely at twenty-six weeks. While Gianna was holding her own, Grady had endured three major brain bleeds and every breath was a challenge for him.

“I remember thinking, ‘I don’t know how I can walk out of this room. How do I go tell people what just happened?’” recalled Smith, who earned a degree in Management in 2000 and an M.B.A. in 2002 from Behrend.

Walking out of the room became a fraction easier when the first person to arrive at the hospital was longtime Behrend baseball coach Paul Benim. In 1998 and 1999, Smith had played for Benim, helping to lead the Lions to back-to-back ECAC titles and 35-8 and 33-10 records, respectively.

The impact Benim had had on Smith over the years was considerable. When Smith first joined the team in the fall of 1997, he shared his favorite Bible verse (Philippians 4:13) with Benim. Two years later, Smith was amazed to hear Benim repeat the verse back to him as he pitched in the seventh inning of a playoff game.

“I walked the first two batters of the inning, and Coach Benim came out to the mound. He looked at me and said, ‘Ryan, you can do all things through Christ, who strengthens you.’ I was so floored by his memory that I just stood there in awe,” Smith said.

Benim’s arrival at the hospital that day in July was welcome. But this time, the stakes were much higher than a playoff baseball game.

Together, the two went for a brief walk.

“I don’t remember how long we walked, but I just vented and vented, and he took all of that in,” Smith said. “When we got back to the front door, he looked at me and said, ‘You can do all things through Christ, who strengthens you.’”

The support from folks like Benim and others proved vital to Smith over the next few months. For seventy-one days, Gianna was under intensive care at Saint Vincent.

At one point, she was flown to UPMC Magee-Womens Hospital in Pittsburgh, before returning to Saint Vincent in Erie and, eventually, being released to her parents.

For the Smiths, the ordeal involved months of hotel stays, fast food meals, and hospital parking bills. It was this experience that served as the impetus for Smith to create Grady’s Decision, a nonprofit organization designed to assist families experiencing premature birth.

“We realized there’s nothing out there to help families who are in this situation. It was such a stressful time, but we thought, ‘How can we take Gianna’s hope story and Grady’s life and do something for others?’”

The number of families who experience premature births is considerable. One out of every ten babies is born prematurely and babies born before the thirty-second week, as the Smith twins were, are considered micro preemies.

“(Grady’s Decision’s) mission is to give people more opportunities to see their child,” Smith said. “I never want someone to miss out on seeing their child in the NICU because he or she has to work.”

Since its founding almost ten years ago, the organization has raised more than $1.5 million to help more than 1,500 families in several states and two countries. Phil Stuczynski, a lecturer in business at Penn State Behrend, and his wife were among the families who were helped recently. Several prominent companies, including the Cleveland Cavaliers, have supported the organization and its mission.

“Grady has been a part of everything we’ve done, and we’ve let his story live on,” Smith said. “The whole experience shows that no matter how old you are and no matter how long you live, your life can have a deep impact.”