Pride of the Lions 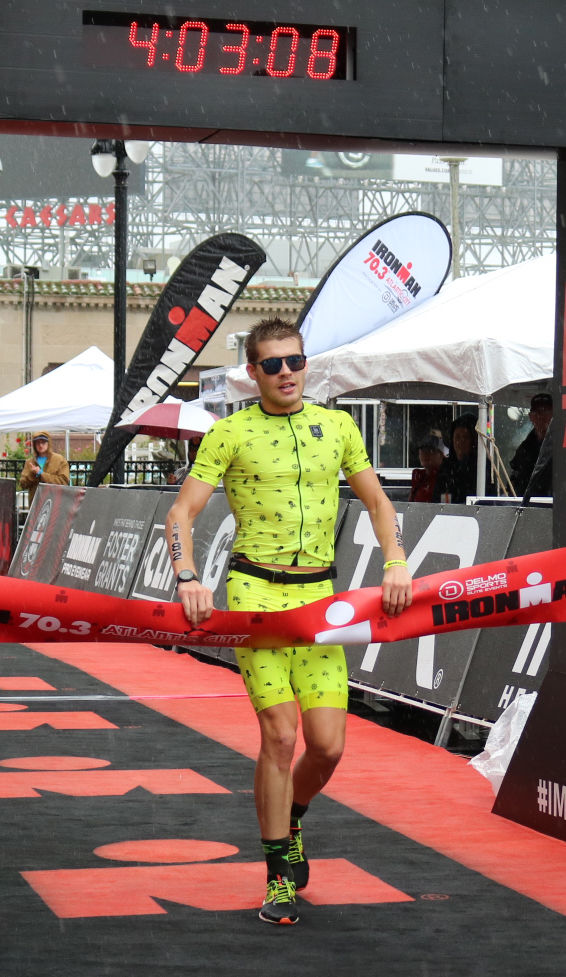 Alumnus racking up big wins at marathons, half Ironmans

Matt McWilliams ’16 attacked his first half Ironman event with such intensity that he needed intravenous fluids after he finished.

“It was the toughest event I had ever competed in,” he said of the race, which consists of a 1.2-mile swim, a 56-mile bike ride, and a 13-mile run. “I pushed myself until I was passing out and ended up needing an IV after I finished. A couple of weeks later, I signed up to do the same race the next year. I was hooked.”

Four years later, McWilliams, 25, isn’t just competing in half-Ironman events, he is winning them. He won the Ironman 70.3 Muskoka in Huntsville, Ontario, last July and followed it up with another first-place finish at the Ironman 70.3 in Atlantic City, New Jersey, in September. His success is no surprise to McWilliams’ former cross-country and track coach, Greg Cooper.

“Matt is an incredibly determined and hardworking athlete,” he said. “Give him a task and tell him he can’t do it, and he will work harder than anyone you’ve ever seen to prove that he can. He was a leader on the team, in both words and action. Never did I have to wonder if Matt was working hard. I probably had to hold him back more than anything.”

When Cooper did let him go, though, McWilliams ran like an Olympian. Actually, faster than an Olympian.

McWilliams, who earned a degree in aerospace engineering and a minor in physics, currently works as a materials engineer at Beaumont Technologies in Erie.

When he’s not working, he’s working out. The Ironman wins don’t come easy, you know.

“I usually only take one or two days off a month,” McWilliams said. “Weekly, I swim five times, bike four times and run six times, so I have to double up some days. It can be hard to fit it all in, but the company I work for has a gym and an endless pool so I can get a workout in at lunch.”

Add in regular strength training, and the hours McWilliams spends training equates to a part-time job.

He doesn’t plan to make it a full-time job anytime soon.

“I earned my pro card at a race in Texas this year, but I decided to continue racing as an amateur,” he said. “Depending on how the next year goes, I might turn pro in 2020. I also think I’m going to try to qualify for the Olympic trials in the marathon distance next year. These two goals will keep me training through another Erie winter.”

He’s off to a great start.

This past fall, he completed his second marathon in Hamilton, Ontario. He won it, finishing the 26.2-mile race in 2:24:04. The Olympic qualifying time is 2:19:00. Can he take five minutes off?

“I wouldn’t bet against him,” Cooper said. “He’ll do it. And when he does get to the world stage, he’ll be the kind of guy who will spend an hour signing autographs for kids because he is a young man with a great heart and character, too.”

He’s a winner, that’s for sure.

On running: I started running in middle school after I found out I was too small for football. I love running because it’s a pure and natural sport. What you put into it is what you get out of it. I also enjoy the time it gives me to think. I never wear headphones, so I have almost an hour a day to think.

On limits: I like endurance events. They strip you raw and reveal your weaknesses. The longer the race, the more of a mental game it is. I enjoy pushing my body and mind to the limit, and sometimes, I find I can push farther than I thought possible.

On plateaus: I got to the point last year where my races weren’t reflecting my training, so I found a coach. He lives in Pittsburgh, which means our interactions are mostly online or by text. He really helps me put the pieces together. Hiring a coach is one of the best training decisions I’ve made.

Building his brain: I mentally prepare for a race in the weeks prior. My coach sends some workouts that are purposely almost impossible to complete. I have to go deep, mentally, to get them done.

On swimming: Swimming is by far my weakest and least favorite leg of the triathlon. I never swam competitively until I was an adult, and it’s a long, slow process to learn how to swim efficiently. I’m improving, but I have a long way to go to get to the front of that pack.

On the perfect race: Long triathlons have so many aspects that are out of your control—like weather or a flat tire—as well as things in your control that you can mess up like nutrition or forgetting gear that a perfect race rarely happens. All the races that fall short of perfect motivate me to try harder next time.

On determination: To be a good triathlete, you have to have a lot of selfdiscipline. Nobody makes me do each workout. It’s an individual sport and you have to be able to motivate yourself. I truly enjoy the challenge of trying to improve.

Lean (calorie-burning) machine: Between being a young male and working out as much as I do, I burn 4,000-5,000 calories a day, which keeps me lean. I have put on muscle in my legs and back, but it didn’t slow me down. In fact, I’ve been running faster.

Free time fun: In my limited spare time, I enjoy building with Legos.

Ultra challenges: I’m doing my first 50K (31 miles) this spring in Portland, Oregon, and I’m signed up for a half- Ironman in Panama City in May. I’d like to win a few more half-Ironmans in 2019.