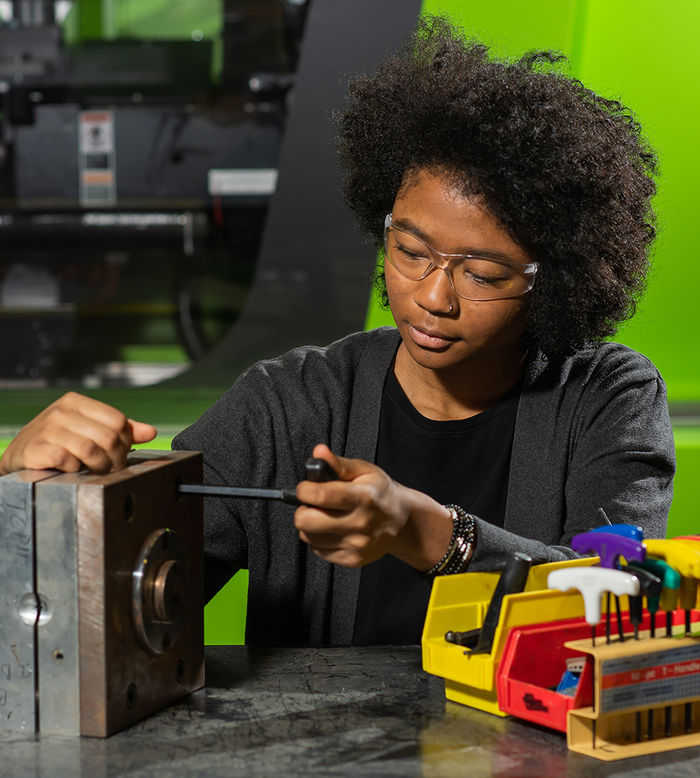 When Rebecca Olanrewaju first calculated the cost of attending college, she based her decision on some very simple math.

“I am not an only child,” she said. “I have a younger sister who will be a freshman when I am a senior. That’s two people who will need some sort of financial support from our mother. It would be selfish of me to take more than my share before my sister even gets to college.”

To reduce her costs and to ease her transition to the college environment, Olanrewaju enrolled in Penn State Behrend’s Pathway to Success: Summer Start program, or PaSSS. The six-week program, which began in 2017, allows students to begin their classes early, with a minimum of $2,000 in scholarship funding in each of their first two summers of study. Students who complete the two-year program are 18 credits ahead of schedule by the start of their sophomore year.

“I saw that as a way to get ahead,” said Olanrewaju, who is pursuing a degree in Plastics Engineering Technology. “It also gives me a cushion if I fall behind in one of my later classes.”

The PaSSS program is working at Penn State Behrend, and not only for Olanrewaju: Nearly 90 percent of the students who enroll in the program–many of whom are the first in their families to attend college–return for a second year. That’s nearly 30 percent higher than the national average.

To expand the program’s impact, the college has partnered with Erie Insurance to provide scholarship funding for nearly fifty additional students – doubling the enrollment in PaSSS. The new program, called Excelerate, is funded through two Penn State endowments, with matching funds from the University. An initial commitment of $1.5 million provided by Erie Insurance, combined with $2.5 million in matching funds from Penn State, brings the total investment to $4 million.

“The idea behind this partnering effort is really quite simple,” Chancellor Ralph Ford said. “It’s intended to broaden the pathway to a college education for more area young people and to help build the talent that powers economic revitalization of the Erie region.”

The community benefits when those students remain in college, said Tim NeCastro, president and CEO of Erie Insurance. He sees the Excelerate scholarships as a long-term investment in the local workforce.

“Excelerate supports high-performing high school students who might otherwise not go to college and creates a pathway to higher education and real-world work experience that is vital to the well-being of our workforce, our city, and our region,” NeCastro said. “Building strong communities is good for local businesses like ours because it helps to attract and retain a talented workforce.”

A second component of the Excelerate program will provide real-world work experience and additional opportunities for career growth. Students will receive funding if they work as interns for community organizations or at small businesses, including startups and entrepreneurial ventures. They also can join faculty-led research teams that are working on projects for those companies.

For Olanrewaju, now a sophomore, those new opportunities extend the advantage she received through PaSSS.

“The whole experience with PaSSS really made my transition to college easier,” she said. “It allowed me to deeply integrate myself into the Penn State Behrend community and it gave me a solid foundation as I began to consider what I want for a career.”

“An internship is the next step,” she said. “That’s an opportunity to apply what I have learned and, in the process, maybe give something back.”